The Commercialization and De-Politization of IWD: A giant leap backwards for woman kind

This was originally published at Hurriyet Daily News. The author is unknown.

In a Fethiye beauty salon window, I saw an advertisement suggesting customers celebrate International Women’s Day, or IWD, by getting a manicure and a new hairdo. I received messages from my bank wishing me “Happy Women’s Day.” And then there were the ads on TV: “Buy a diamond for your darling on World Women’s Day!” I was confused. This wasn’t my idea of what this globally recognized day was supposed to be about, but perhaps I was mistaken and times had changed.

Curious about IWD events in other parts of Turkey and the world, I checked out the web site and was dismayed to see that Turkey does not appear on the list of countries in which this day is celebrated. Of course, this did not mean that nothing was happening in Fethiye, it just made it more difficult to find out.

I wondered if IWD as I knew it was not recognized in Fethiye, if women here saw it as an event in which gifts and beauty treatments figured more highly than women’s economic, social and political roles. Should women in 21st-century Turkey paint our nails, or consider women’s rights? Maybe both? At the national level, there were articulate newspaper articles, well-attended marches and a lively debate spanning the range of Turkish media. But it seems that this politically charged day is being de-politicized, and thus rendered impotent.

Seeing Turkey ranked 123 out of 130 countries in the 2008 Global Gender Gap Report made me speculate on what I hoped were incorrect assumptions: Were Turkish women complacent? Apathetic? Oppressed? Fortunately, I discovered that while there was not any widely advertised Women’s Day event in Fethiye, there was something happening at the town’s cultural center.

Despite heavy rain, there was a good turnout at the statue of Atatürk, who enshrined gender equality in the Turkish Constitution. During the War of Independence, women gave their lives delivering supplies to the front. The young Republic strove to emancipate its women in the 1920s, ahead of other European countries. Paying tribute to the man behind all this was nothing less than I expected. But is what has happened since really a cause for celebration?

International Women’s Day was a golden, if damp, opportunity for our exclusively male local-election candidates to appear, handing out heart-shaped candies. (For a brief moment, I thought it was Feb. 14) At the Turkish municipality level, there is only 0.56 percent female representation, and just one woman running for mayor in Olüdeniz and Fethiye. As we are undisputedly half the population, this is unacceptable. Sweets do not make that bitter taste go away.

A modest audience retired to the comfort of the theater, where a panel of professional women gave a series of passionate educational speeches about the historical role of women in Turkey, the country’s inequitable insurance and pension system and the inevitable struggle that women will face during the current economic crisis.

Though their talk was well received, there was still a nagging doubt in my mind. I suspected the majority of people who attended came out of curiosity and the inclement weather, rather than a desire to understand the problems faced by Anatolian women. As I asked others around me what they thought, it seemed that there were different opinions as to the purpose of the day.

To me, this experience represents one of the paradoxes in Turkey: While I do not reject the idea that women should receive gifts (I am not so crazy!), in this context, it does not draw attention to women’s strength and achievements, or to the uphill struggles that await them. Rather, it smacks of a tacit acceptance of an unacceptable status quo.

Is International Women’s Day about handing out candies and flowers? Sending celebratory text messages? Buying wives and girlfriends presents? If that’s what turns you on, maybe it is, but we cannot afford to be complacent. Couldn’t we also make this day an opportunity to learn about women from other cultures and join the global discourse about female emancipation, entitlement and empowerment in the face of the obstacles and impediments thrown up by a society in which patriarchy and religion rule? When I suggested this to a woman friend, I was firmly told not to spoil the celebrations by asking “difficult questions.”

“Hey,” I answered, “If we women don’t ask them, who will?” We de-politicize this day at our peril. If we do, it will be our loss.

March 16, 2009 The Age of Innocence: the Mistreatment of an Elderly Woman in Saudi Arabia
Browse Our Archives
Related posts from Muslimah Media Watch 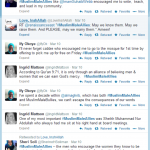 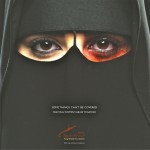 Muslim
Saudi Women at the Helm: Beneficiaries of the...
Muslimah Media Watch
TRENDING AT PATHEOS Muslim