I wanted to go back to one of the points I made in my first Ramadan post, namely that how we carry ourselves during Ramadan is in itself a form of dawah. Telling people about Islam isn’t just street preaching and teaching at the masjid; it is also the image of Islam we project to the world. That doesn’t mean we do Ramadan for other people – we do Ramadan to please God (at least, in theory) – but if we are miserable, niccing out and irritable, people are going to think that Ramadan is no fun. You never know who in your entourage is Muslim-curious; I just found out a dear friend of mine is thinking of converting, when I hadn’t been “asked about Islam” by this person in the past. But regardless of whether the people around you have any interest in becoming Muslim themselves, your behavior as a Muslim has an impact on what they think of Islam and how it is practiced. You owe it to yourself and the community to present your choice of religion in the best possible light.  This is more effective dawah than being a judgy fake nasihah (advice) giver who thinks s/he is “enjoining the good.”

For Ramadan, I try do this in a number of ways.  The best way is to be matter-of-fact. Yes, Ramadan is a test on your system, but it isn’t something that normal people under normal circumstances can’t handle, so there is no reason to fear the fast. From the incredulous who can’t believe we can’t even have water, to the non-Muslim Ramadan police (the ones at work who ask “I thought you couldn’t eat during the day until August 20th at sundown”), you will always have people watching what you eat and what you do this month. I try not to “celebrate” having my period this month, and if for whatever reason I have to break my fast, I explain why certain people aren’t forced to fast. But speaking of “normal circumstances,” the fasts are quite long this year and some people have had trouble tweaking their schedules, some otherwise healthy people can’t fast at all, and it is what it is, who are we to judge etc. etc. I’ve actually had a lot of questions about that privately – people asking why some of their Muslim friends are eating. I find it helpful to spell out that fasting is an act of worship between you and God, and that Islam isn’t a monolith: some Muslims fast, and some Muslims don’t fast, and often for reasons only known to them. Also, food is the great unifier, and when Eid comes, you better bring that baklava and cornes de gazelle to work.

Another example of Ramadan dawah comes up when some girl always tries to talk to me about Islam at this time of the year, but not for the reasons you might expect. Whether through a phone call or an email or a hit on my blog, I can honestly say the same situation has happened to me every year for the past ten. The women change but the stories stay the same: she’s dating a brother, and he “dumps” her for Ramadan, and she has nowhere to turn but the first Muslim female she knows. 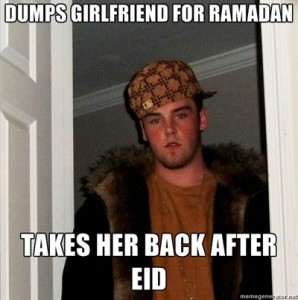 So in the light of her boyfriend’s “bad dawah,” I am put in a position of having to explain Islam to a girl who wonders why she never gets the 4am breakfast call or why nobody invites her to the masjid. To the brothers in question: I’m not going to judge you for having a girlfriend, but don’t you think there is a better way? Why do you want Islam for yourself but not for the girl you are sleeping with? Homie has a touch of the Ramadan Guilt and his girlfriend has to come ask some random girl on the internet what Ramadan is about? What makes doing something (dating) 11 months of the year ok but not ok now? How does that make us look when a guy says, “Sorry Honey, I can’t even call you during Ramadan, God said so, see you on the 20th, don’t forget the condoms”? If you are serious enough about Islam to do Ramadan, why can’t you include the person you currently spend your life with? Try to spend an iftar with her, have a honest chat about your religious practices, make her feel included.  And no, I don’t think talking to your non-Muslim sexual/life partner about Islam is making the haram halal; rather, it is getting past the hypocrisy about the spectrum of one’s life choices, and being honest about its inconsistencies.

Making Islam look good by not being a jackass extends to the private sphere when we are around Muslims too. In fact, a lot of us, Muslim and non-Muslim, forget that another important part of Ramadan is good behavior.

Iftar stories are the stuff of legend: the stampede at the buffet table, people trying to one-up each other with blood sugar stories, not doing dishes for the person who cooked three hours for you (while fasting) because you’re “digesting”…I can’t even play that game anymore. If we are supposed to be the best of the believers, why do we see the absolute worst in human behavior in the hours around Maghrib? Moroccans even have a word for it: “tramdine,” the syndrome of people who bug out. We are responsible for our own behavior.  That means we aren’t supposed to bug out during Ramadan, online or off, no matter if we think our anger is righteous, because anger still breaks the fast. That means having a protein bar in your purse if you are at the masjid or someone’s house and the food isn’t coming fast enough.  That means tapering down on your nicotine and caffeine before Ramadan so you aren’t going through withdrawal. Finally, it means going past the food and realizing that other people could be going through stuff you don’t even know about.

This is as much of a reminder for me as it is for everyone else; now more than two weeks in, I wish I could have done a lot of things this Ramadan in a different way. I was so caught up in being tired and organizing my situation that I forgot to be there for some friends having a tough time.  Life is a learning experience, and every Ramadan brings us new lessons.  Happy fasting! 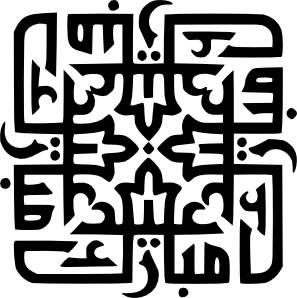 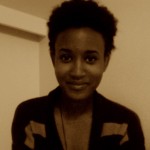 Considering Time: New Year Reflections
The movement into a new year naturally makes us reflect on the...
view all Muslim blogs
Copyright 2008-2017, Patheos. All rights reserved.