Now that Ramadan is over, I can get it out of my mind and scream hard on how women were portrayed in the Egyptian TV throughout the whole month.

Women are seen as sex objects: there’s no better way to put it than this cliché; it is as simple, as shallow, and as degrading as it has always been. One would think that the so-called Arab Spring would make some difference, after people had watched women side-by-side with men, playing their crucial role in all the battles since the first day of the revolution, but nope… not a chance.

Here are just some of the messages we saw:

Being a woman is offensive!
There is no way to understand the Birell non-alcoholic beer ad campaign for Ramadan other than this. In the whole campaign, they present men in tough situations asking them to fuel the “man inside” by drinking their product for not to be “soft and sissy”… i.e., a woman. In case you think I’m paranoid, here’s one ad, where they have a woman’s wig on the guy’s hair when he starts to be soft, and here’s another one where the man starts looking like a woman when he says “please.”
This is my favorite, the one where he is accused of being a woman when it shows on him that he had feelings for his girlfriend, what a wuss. For him to gain his glorious manly mustache, he shows his girlfriend’s picture to his friend, because of course he’ll only be worthy of being called a man when he objectifies women and act as if they mean nothing to him.

Women are trophies and check marks!
I tried for days to find a way to begin talking about the TV series “The Fourth Wife” without getting heartburn, but it was a lost cause.  As an Egypt Independent article explains,

“‘The Fourth Wife,’ starring Mostafa Shaaban, narrates the diaries of a young rich businessman who lives with his three wives in his villa and changes his fourth wife every now and then.

Shaaban, who wears a galabeya and holds prayer beads as a sign of piety, is the expert on women’s issues among his friends, from whom they all learn.

“It is a message to women to remember not to cross the lines … to remind them of what their role should be [after the developments of the past year],” argues Fatma Emam, a researcher at the Nazra Center for Feminist Studies.”

Female doctors are not cute, and a woman is just like a shoe!
In “The Needle’s Eye” series, the script was customised to be as dumb as it can get.
In one episode, two guys are hanging out in a disco and they spot a woman; through the whole conversation, which extends to more than three scenes, this woman is referred to as El-Farda, meaning a one of a pair of shoes… isn’t this just interesting!
In other entertaining episode, a guy hitting on a woman wonders why she is called a doctor when she is that cute… wow, as a woman, and a physician, I’m utterly flattered!!

Women only care about men … and marriage
And when it comes to “A Third Party” series, they chose to be more true to themselves about being part of a man-world, the main characters in the show are men, and the majority of the female characters so far both think and speak almost exclusively about men and marriage… After all, what other purpose does a woman have?!

Women just have no sense of humour
Last but not least, a TV “comedy” series called “My Wife in Trouble” dedicated their efforts to joining the whole “let’s degrade women” theme.  In one scene, the married loving husband laughs his ass off at his crying wife after making her believe he was cheating on her… how romantic!
Just try to imagine the opposite… It wouldn’t be funny, right?

I could try to rationalize having such shows – and these just are examples – for Ramadan but I would not be successful. See, the real problem is not just these shows; it is the people who are supposed to be the audience.

At the end of the day, even when women try to fight a whole system that makes such “entertainment” acceptable and fun, they don’t fight it on the right level. When women live as second-class humans in real daily life, why would they be portrayed better or even considered on television?

Whoever was responsible for the Birell ad, for example, decided that a woman is not in his target audience whatsoever and that she is not worth his consideration when he plans his marketing campaign, cause let’s be honest, women accept far worse in their lives than those ads on TV!

If we’re not respected and we live with being humiliated, degraded and harassed in daily life, how would media be any different?

August 23, 2012 When Laïcité Goes Wrong, or When Burqa Checks Start Getting Real
Browse Our Archives
get the latest from
Muslim
Sign up for our newsletter
POPULAR AT PATHEOS Muslim
1 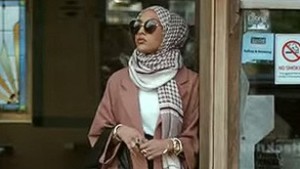 Muslim
When Invisibility is a Superpower: Farah Nazan in...
Muslimah Media Watch
TRENDING AT PATHEOS Muslim