Motherhood and Islam: The Revered, the Bad, and the Mystical

I can’t remember when I first learned that “Paradise is under the feet of mothers.” But I do remember the first time my parents quoted the story when the Prophet was asked who has greater right, the mother or the father, and replied ”Your mother, your mother, your mother, then your father.” This three-fold reiteration of the privileged status of the mother in Islam is central to those endless articles on “Women in Islam,” which tend to collapse the status of women with the reverence for mothers in Islam.

The use of Quranic and hadith sources to highlight the importance of motherhood, which is the subject of books such as Aliah Schleifer ’s Motherhood in Islam is, I believe, important, as are more context-specific studies that look at the nexus of Islam and motherhood in specific societies.

The problem I find is that often discussions about the representations of mothers in Islam get caught up in the familiar argument about whether this overwhelming reverence for the mother is potentially empowering or reductive essentialism. What about women who are not mothers? It’s a legitimate and important question. Another question that might be asked is what happens when this Islamic narrative of revered motherhood collides with the pervasive narrative of the Bad Mother?

A couple of months ago, I came across a story about a Muslim mother in Australia who had taken a photograph of her young child holding up a sign that said “Behead all those who insult the prophet.” The mother insisted that she did not know what the sign said, that she was “not a bad mother” as she had been labelled. There was a dissonance to this that went beyond the chasm between a recent immigrant, apologetic about her ignorance of English, and readers who saw this ignorance as a disingenuous performance to disguise her crime. At the root of the story was the trope of Muslim motherhood teaching children to hate, a “savage love” that is the ultimate unnatural perversion of the natural bond of love between mother and child. So ideologically, Muslim motherhood becomes the other of the cultural-religious symbolism of motherhood as love identified with Western discourse.

The dichotomy collapses easily, however, because the Bad Muslim Mother mimics the Bad Mother in Western discourse, once monstrous and unfathomable and savage, now depicted as tangled up in the anomie of modernity, in the guilt-trips of quality time and babysitting, with a plethora of self-help books on the subject from Confessions of a Bad Mother to The Bad Mother’s Revenge. The titles hint at the monstrosity that is being recuperated.

I’ve always felt that the Bad Mother is replaced in Islam with the Bad Child, as everything revolves around what the child owes the mother, and on the guilt burden of realizing that the child will always fall short of their duty. See for example, this “Sufi comic” on Motherhood, which illustrates the aforementioned hadith about the mother having the greatest right.

But this is changing, particularly when it comes to Muslims in the West, where there are guides for parenting and raising children to remain Muslim, as well as a shift for the second generation away from the notion of “Bad Child” to “Bad Mother” who is not so much monstrous as identified with traditional motherhood. For example, in this article a Muslim mother writes:

“My parenting style? Like my parents, a little confused. When I ask nicely, explain and let things go, my family calls me English mum. When I lose it and shout and issue orders, they call me Punjabi mum. I guess I am still learning, with my faith as a guide.”

While traditions of respect for mothers lead many to point out the scarcity of homes for the elderly in Muslim-majority societies, here the writer identifies the Good Mother with the English mum and the Bad Mother with the Punjabi mum, the focus not on the duty of the child but the responsibility of the parent, in a way which is here troublingly connected to familiar narratives of the backwardness of Muslim cultures.

So where is the universal in motherhood? Perhaps it is in what Kristeva calls “Motherhood’s impossible syllogism” of self and other. As Elizabeth Stone compares the decison of having a child to deciding “forever to have your heart go walking around outside your body,” in Khalil Gibran’s poem: “Your children are not your children…though they are with you, yet they belong not to you.” The simultaneous identification and separation translates the relationship to divinity in mystical traditions. So in a study of Motherhood and Spirituality, Delaney finds that “motherhood is not without its spiritual consolations,” giving the example of a Sufi woman who:

“when asked how she integrated her family life and her spiritual life gave a simple, thought-provoking reply: ‘When I looked at the faces of my children, I saw the face of my Beloved.’”

One of the most-used words for God is Al-Rahim, the merciful, an Arabic word which comes from the same root as the word for womb. Should we dismiss this as essentialist, as mumbo-jumbo? What about the work of  Hend Al-Mansour and Leili Tajadod-Pritschet, two artists who have worked on a project called “the Great Mothers of Islam,” where:

“Al-Mansour considers Fatimah, prophet Muhammed’s daughter. Tajadod focuses upon Aisha, the prophet’s wife. Fatimah represents the pure, resilient, and sacred mother who protects and blesses. Aisha represents the wise, warrior and confronting mother who fights back and argues. As part of the artists’ personal journey, Tajadod, an Iranian Shiite, celebrates Aisha, the Sunni wise mother, while Al-Mansour, a Sunni Muslim from Saudi Arabia, makes her art about Fatimah, the Shiite holy mother.”

All the warning signs and trappings of reductive essentialism are there: great mother, wise mother, holy mother. Woman as nature, woman as earth, woman as insufferable ever-lasting symbol. But this is not simply about reducing the woman to a reproductive mammal. Aisha was not a biological mother, and yet she and all the prophet’s wives are among the “mothers of the believers.” How should we position ourselves with respect to these stories?

Although some of those “status of women in Islam” articles are truly cringe-worthy I don’t think it’s a good idea to distance ourselves from the more spiritual notion of motherhood;, this is a part of Islamic heritage, a reminder that there is a mythology of motherhood in Islam, beyond the dry repetition of tidbits of hadith, to fill the inherited traditions of reverence with stories to make them come alive. 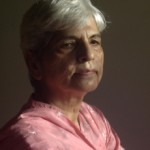