No Compulsion In Religion 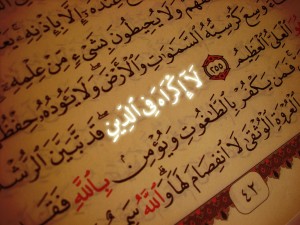 “There shall be no compulsion in religion: For Truth has become distinct from error, and whoever rejects falsehood and believes in God has grasped the most trustworthy handhold, which never breaks. And God is Hearing and Knowing.” (Quran 2:256)

The placement of this verse in the Quran remarkable. It immediately follows The Verse of the Thrown, which is the most read, most widely memorized, and most prolifically displayed verse in the Quran. The Verse of the Thrown is the John 3:16 of the Quran. So, this statement regarding compulsion is embedded within potent statements on creed. Obviously intended it to be well known, and therefore well understood. The only published explanations of this verse that I have found are concerned entirely with prohibiting forced conversion. This is a reaction formation to accusations that islam is spread by the sword. It is not an actionable interpretation by muslims for muslims. They do not discuss the implications of prohibiting compulsion in other matters. So, I’d like to decompress the issue as I see it.

The Quran is not careless with words. This sentence is only four words. La Ikrah fi deen. “No compulsion in religion.” Every scholar I’ve ever heard discuss the word deen says that “religion” is a poor translation, and that it means a complete and comprehensive way of life. Why would the Quran use a word that means a complete way of life to describe a principle that only applies to proselytizing? Could it not have said, “No compulsion in dawah” which literally means “invitation” and is used to describe proselytizing?

The verse is a logical argument. A premise followed by its supporting evidence. The Quran is often constructed in this format. Over and over the Quran tells us, “Will you not use reason?” and that God despises those who don’t. “The worst of creatures in the sight of God are the deaf and dumb who do not use their intellect to understand.” (Quran 8:22) So, let’s break down the argument. Given that Truth is distinct from error, therefore religion must be free from coercion.

Reason dictates that any instance where the evidence is true the conclusion must also be true, and the evidence presented is true in all instances, therefore the premise must be true in all instances. It cannot be true for conversion and false for other matters. How can the premise be abrogated when the supporting evidence remains? This is the principle of nonaggression. “Surely, God loves not the aggressors.” (Quran 2:190) i.e. The initiators of coercion.

The principle of nonaggression is a deep and fundamental Truth in human interaction. Actions which are coerced have no moral value. A confession under torture is no real confession. Giving money to the poor at gun point is not real charity. The aim of islam, and religion more broadly, is to place moral value in every action, so how can coercion be virtuous?

The simplicity and profundity of the nonaggression principle is, I believe, the keystone to solving the strife in muslim majority countries, and indeed the world. So, two fundamental questions exist concerning the meaning of this verse. What is compulsion, and what does it mean that Truth is clear from error? As far as I can tell, the Arabic word Ikrah is accurately translated as “compulsion” with very little loss of meaning, except that the root word in Arabic is the same root as “hatred” which does expand the implication. Perhaps “aggression” is a better translation. Compulsion is the use, or the threat of aggressive force to cause someone to act against their will. Generally, people consider this the use or threatened use of bodily harm, and some include in this definition threats made to a person’s wealth and property.

The Truth is not so clear that people cannot continue to deny and distort it, as they did at the time of this verse. But, it is so clear that those who study it and consider it with sincerity often come to believe it, even its most emboldened enemies. Here lies the fulcrum on which clarity and compulsion turn… sincerity. Compulsion obfuscates sincerity. Therefore sincerity and compulsion must be inversely correlated, and as one waxes the other must wane. Like oil and water, the two are incompatible.

Let me put it this way, if an Arab flies from Arabia to Malaysia and the moment he leaves Saudi air space he has a glass of wine, he doesn’t get moral credit for not drinking wine in Arabia, because in his heart of hearts he was abstaining in acquiescence to state aggression, not out of sincere obedience to God. In other words, if you are praying because there is a gun to your head, you are not worshiping God, you are obeying the gunman.

December 20, 2013 Free To Dance, And Not To Dance
Recent Comments
0 | Leave a Comment
Browse Our Archives
get the latest from
Muslim
Sign up for our newsletter
POPULAR AT PATHEOS Muslim
1