The first time it happened I was walking down the driveway on my way to work. I paced down the narrow driveway with my purse in one hand and lunch in the other. I took a quick glimpse at my watch. It was starting to get chilly and I was happy I wore a long sleeved shirt underneath my scrubs. I took note that I would be hot later in the day. It wasn’t quite summer anymore but it still wasn’t autumn. The seasons were flirting with each other. Like a lover not ready to say goodbye the summer sun still lingered high in the California sky. Sometimes she lingered behind a cloud. Her bashfulness wouldn’t last too long because by midday she would be beating down full force. The seasons teased each other by the weather switching between it being chilly some days and warm on others.

An oversized oak tree sat in the front yard. Her trunk thick and branches hovering over the house as though she were protecting it. On nice days I would sit on the steps and smoke a spliff underneath her. I never quite understood why people chopped trees down. Maybe people considered them overbearing and intimidating after they grew to a certain point. For some, trees served as a reminder that there were indeed things greater and more amazing than the creation of man himself. I’d puff and inhale deeply filling my lungs with smoke and exhale slowly allowing the smell to engulf and surround me. Lost in the smoke and deep in my thoughts I’d conclude with the thought that the ego of man was an awful thing.

As I approached the end of the narrow driveway I was abruptly greeted by my neighbor, Mrs. Jean. Mrs. Jean lived in the apartment beneath me. She always wore the same purple sweatshirt that zipped halfway up. Her stature was small and her moves slow and calculated. At eighty-six years old she was still very mobile. From a distance I noticed her sweatshirt was beginning to fade into a lilac.

Mrs. Jean looked up and smiled bright as I approached her. I paced towards her and smiled back. As I got closer my smile quickly faded as I realized she was elbow deep in the garbage can. Tuesday was garbage day. She had to stand on the tips of her toes to fully reach in the can. One gust of wind would probably throw her head in first. She was going through the whole buildings garbage separating the items that could be recycled and breaking down large items such as boxes and milk cartons. This involved her opening bags and literally going through items piece by piece. I noticed she began to reach for my bag and in a desperate attempt I closed the lid of the can. I missed her fingers nearly by an inch.

The force of the lid slamming down sent a rotten smell in my direction.

“Mmmm—Mrs. Jean, its ok. I can go through it myself.” I stammered while trying not to appear agitated. I took a quick glance at my watch. I was going to be late.

I really could not believe what I was witnessing. Never would I think I’d be in the position to stop someone from going through my garbage. I was almost to the point of begging. My disbelief was on the brink of anger. My privacy was being invaded and to be quite frank I didn’t like how that felt. I was convinced Mrs. Jean didn’t care about sustaining the environment. She was being nosy. She wanted to see what the building was up to.

Even if I was throwing it away it was still mine. All mine. This was my garbage.

“Honey, look you have work. You’re all dressed. I can do this. Just get on your way.” She gestured to me like a grandmother telling her grandchildren to get out the way. I slowly walked away and looked back. She waved and smiled.

I opened my car door and threw my lunch and purse onto the passenger side seat. As I drove away I looked in my rear view mirror until Mrs. Jean turned into a purple dot. She was still digging through the garbage. While I was at work all I could think of was what was in my garbage bag. I began to recollect what I had eaten throughout the week and all the personal waste I had accumulated. I had images of her going through candy bar wrappers, pantyliners and ripped up mail. The thought of it mortified me.

I sat at a desk charting on one of my patients. I took a deep breath in and realized I was ego tripping.

Then other thoughts began to creep in my mind. What would make a person decide to go through another persons trash? I mean, it was California but Mrs. Jean didn’t seem like that staunch of an environmentalist. I suspected something else. I had to investigate so the decision was made to pay her a visit later that week.

Later that week I woke up early. I pulled on a pair of old jeans and threw a t-shirt on. I slipped my feet into a pair of gym shoes and walked down the flight of stairs. I baked some banana bread the evening before and put a couple slices aside. I knocked on the door and stood there for a couple of seconds before I heard the shuffle of moving feet headed towards the door. Mrs. Jean opened the door wearing her infamous purple sweatshirt. I saw a look of surprise on her face and a smiled followed.

“I baked some extra cake last night and thought you’d like some.” I said while handing her the warm plate.

She gestured for me to come in. I took my shoes off at the door and walked into her living room. Her house was decorated with dark wood paneling and oversized sofas. I sat on the love seat and sank deep into it. She asked if I wanted a cup of tea. As she went to the kitchen I rested my head back and surveyed the room. Pictures of smiling people hung on the wall. Some photos looked relatively new while others were beginning to fade into hues of brown and yellow.

She shuffled back into the living room handing me a cup of hot tea. It smelled like chamomile. I took a couple sniffs of the tea before resting the cup on my lips. The pleasant taste of honey aroused my taste buds. I nestled into the sofa as Mrs. Jean began to talk.

This was the visit where I found out that Mrs. Jean was a lonely woman, a very lonely woman. She drifted in that dark apartment between memories of the past and a rapidly changing world that greeted her at the brink of her doorsteps. To make matters worse the West didn’t treat its elderly with kindness and patience. As a nurse I could think of countless times I had witnessed this working with older patients. There was no joy or celebration in becoming old rather it was always viewed with a sense of contempt and regret. The first appearance of fine wrinkles and gray hairs sent some women into botox frenzies. The idea of prolonging youth was often encouraged and anyone who embraced the idea of getting old was side eyed.

My visits became more frequent. I’d often sit through the same stories over and over again. Each time acting as though it was the first time I heard them. I knew it brought her a sense of comfort having someone to talk to even if that meant listening to her stories that I would repeat verbatim in my head.

People will do strange things in order to feel a sense of connection and purpose. Right now my purpose was clear and concise. It was very difficult to imagine myself being an old woman without anything to do. At thirty years old I was moving with life and the feeling of being stuck in time was foreign to me.

I slowly realized it was so much more than the garbage and I was indeed ego tripping. It had absolutely nothing to do with me and my feelings. This was about an old woman who had nothing else to do except go through the buildings garbage. We all have the possibility of becoming a “Mrs. Jean.”

Be kind and patient with the elderly.

November 24, 2016 Black+Muslim+Woman+Trump
Recent Comments
0 | Leave a Comment
Browse Our Archives
get the latest from
Muslim
Sign up for our newsletter
POPULAR AT PATHEOS Muslim
1 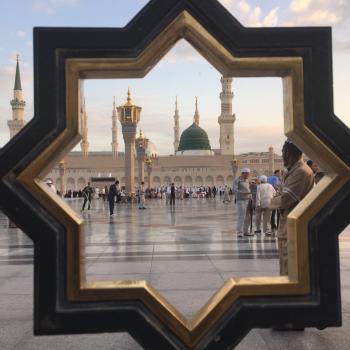 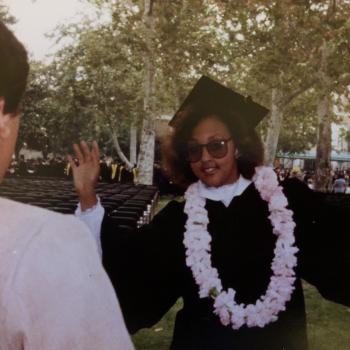