A Palm Sunday Sermon on Why We Don’t Go Straight From Hosanna! to He is Risen! 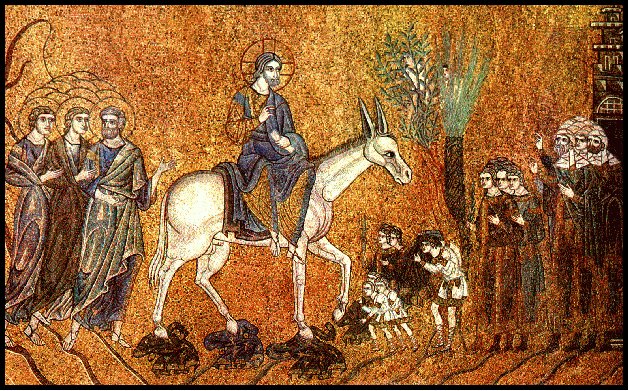 (On Palm Sunday I had the honor of preaching at Highland’s Church in denver.  Highlands is an open and affirming Evangelical church and I’m good friends with their incredible pastors)

Palm Sunday used to be just Palm Sunday in Lutheran churches.  But now it’s Palm slash Passion Sunday.  We felt we had to do that because people weren’t showing up for Maundy Thursday and Good Friday services.  It was kind of sneaky. They were going from the triumphant “Hosanna” of Palm Sunday to the glorious “He is Risen” of Easter Sunday without going through the horrifying “Crucify him!” of Good Friday.

So Lutheran churches started making today into Palm –slash– Passion Sunday so that we were sure people would hear the scriptures readings of the Passion of our Lord otherwise known as the betrayal, denial, insulting, spitting, beating, suffering death of Jesus of Nazareth.

And hey, I understand the impulse.  Who doesn’t want to go from glory to glory and just skip the messy embarrassing condemning stuff in the middle.

So if we can just go from the Palms of the parade to the lilies of Easter we can avoid feeling bad about ourselves, and avoid feeling more than a little embarrassed for Jesus.

That’s the problem with the cross it feels either senseless or condemning and sometimes both.

I know for myself that at the fundamentalist church I was raised in I was taught that the cross was about the fact that, because I was bad God had to send his little boy…and he only had one,  and God had to send him to suffer and die a horrible death because – well,  someone had to pay for the fact that I’m bad.  And therefore being a Christian meant feeling bad enough about all of this that you would then try much, much harder to be good.

So almost every Sunday growing up we’d hear readings about the crucifixion and my 12 year old self would be tortured by how the sins I’d committed that week were why God was angry enough to kill his own son. Sins which generally involved things like, you know: using swear words and eating the banana my sister was saving for her breakfast.

Either way, I don’t think that’s really who God really is.  But I do think that whole mess is what we get when we think the cross is about us and not about God.

No wonder people want to go from glory to glory and skip the cross.

But when we think the cross is about us, the only view we can have of God is of God standing in heaven with folded arms looking down at the cross in judgment. Judging us, and punishing Jesus.

But the thing is, God isn’t standing above the cross.  God is hanging from the cross.

The problem starts when we think we can know who God is by just looking at who we are and then projecting that up really big.  We’re vengeful so God is vengeful.  We are power-hungry so God is power hungry.  We want to smite our enemies so God wants to smite our enemies. That’s why it’s hard to imagine that God would willingly choose to be poured out for us on the cross because, well, we’d never do a thing like that.

But the good news is that there is a reliable way to legitimately know about the nature of God. And it’s never to look at ourselves.  And it’s always to look at Jesus.  Jesus is God’s self-revelation.  Jesus is like God saying This is how I want to be known. It’s like God is telling us: will you stop your projections already and just listen to Jesus, watch Jesus, follow Jesus so that you can really know who I am.  The way to know the Father is through the son, anything else ends us being about us and not about God. And what’s wild is that we most notably can see who God is in how God chose to reveal God’s self in a humble cradle and on a human cross.

Because on the cross we don’t see a legal transaction where Jesus pays our debt.  We see God. The Word made flesh hangs from the cross as though God is saying “I would rather die than be in your sin accounting business anymore”.

From his rough hewn throne of a cross Christ the King looks at the world and no one escapes his judgment…those who betray him, those who execute him, those who love him, and those who ignore him. He judges us all. From the cross the pronouncement is made and the judgment is ….forgiveness. Forgive them Father for they know not what they are doing is an eternally valid statement. From his cross Christ loves the betrayer, the violent, the God killer in all of us and despite our protests he will not even lift a finger to condemn those who put him up there.  Because it is finally only a God unlike us- a God who enters our human existence and suffers our insults with only love and forgiveness who can save us from ourselves.  It is only a self-emptying God walking among us as Christ Jesus, who, in the words of St Paul, though he was in the form of God, did not regard equality with God as something to be exploited, but emptied himself,  humbled himself to the point of death— even death on a cross – only this one can save us.

And, I would contend that it is only through the cross that we know that God isn’t standing smugly at a distance but that God’s abundant grace is hiding in, with, and under all this broken stuff in the world around us.

Because while the suffering and death of Jesus Christ on the cross is not about you.  It is certainly FOR you.

In fact, God is so for you that there is no place God will not go to be with you.  Nothing separates you from the love of God in Jesus….not insults, not betrayal, not suffering, and as we will see at Easter – not even death itself.

So don’t go from glory to glory and skip the cross, because as Christ’s broken and blessed body you move into this week with only one certainty:
that as you enter it, you do so in the company of a self-emptying God who pursues you and saves you with relentless, terrifying love and who ultimately will enter the grave and the very stench of death in order to say even here, even here I will not be without you. Hosanna in the highest indeed. Welcome to Holy Week.  Amen.

April 4, 2012 Mural of the Last Supper by House for All Sinners and Saints
Recent Comments
0 | Leave a Comment
"Grief and loss are really tough things to deal with. Sermons on this matter from ..."
Don Davies An All Saints Sermon on Grief ..."
"Ive read the bible. Its the #1 reason I am not Christian. The behavior of ..."
JD The Denver Statement
"To trust in God rather than try to analyze His motives (meaning, sit in judgment ..."
Eric Rachut The Denver Statement
"You tell me."
JD The Denver Statement
Browse Our Archives
Related posts from Nadia Bolz-Weber