House for All Sinners and Saints, the congregation I serve as Pastor, is a pretty progressive bunch of folks.  The culture of the congregation skews liberal – so when a thing like the SCOTUS ruling that the Affordable Care Act was indeed constitutional happens, my Facebook newsfeed lights up with one celebration after the other.  Based only on my Facebook newsfeed last Thursday one could easily surmise that all of America was elated about the decision. Except that’s not reality.  Reality is that the decision divided America once again and the sides divided turned on each other in vicious and sometimes alarming ways.

The first couple hours after the ruling people were posting links to the news story, perhaps with a little “woo-hoo” or “yes!”.  But soon there were things like this: 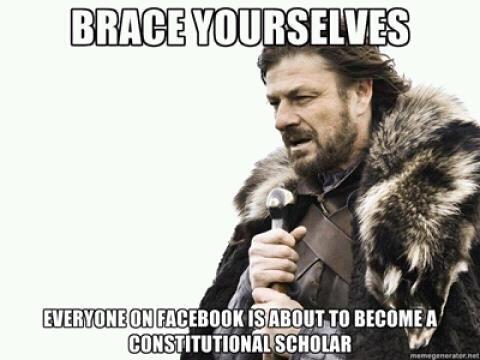 I laughed when I saw this.

Then my newsfeed filled with more derision. Like this: “This thread of folks “moving to Canada” because of “socialist Obamacare” makes me glad I paid attention in school.”

Again, I thought that was funny.  I thought it was absurd that people would want to move to another country just because now more low income people can afford health care.

Then my editor Nicci posted this:

“I know that many of you are opposed to Obama’s health care law, but for me, this is extremely good news. What this legislation will do for my family–for my husband with Type 1 diabetes and for my mother with blood cancer–is immeasurable.”

Her post was heartfelt and not at all insulting to those who disagree with her, yet still I replied thusly and with great snark:

“If they wanted quality health care they should have known better than to get those kinds of diseases without being wealthy. seriously.”

The day was looking to be one of celebration until I started to see posts in my newsfeed from a new couple at church.  They aren’t just new to church.  They are new to the Christian faith.  I baptized them both at the Easter vigil and when her mom died a couple weeks later our church prayed for them and brought them food. They drive over an hour each way every week to be part of our worshipping community. They were not celebrating on Thursday.  Their posts were about losing freedom and liberty.  There was at one point even a picture of Hitler posted with a list of what kind of measures Nazi Germany had to undergo to afford universal heath care, which made me squirm.

But later that night when I saw a post from her about how some people were deleting her because of political disagreements my heart sank.

1. I whole-heartedly support more access to affordable health care for all Americans and hope that the ACA will accomplish this.  But it is unfair to assume that people who disagree with the ACA do so because they want the opposite of what I want – that they oppose it because they want to keep poor people from having access to quality medical care.  It is unfair for those who oppose the ACA to assume that I support it because I hate freedom and liberty. The fact is that I have not read and clearly do not understand the 1000 pages of this legislation.Therefore, some of the complaints brought by the detractors may very well have some standing to them.

2. As the church, our political leanings should not be the thing that unites us otherwise we too easily fall into the “Isn’t Jesus so lucky to have us on his side?” heresy.   It has to be grace.  It has to be a table where all are welcome. It has to be Christ. When it’s anything else we aren’t really being the church we are being something else and people get hurt.

I think that on a personal level our faith should inform our politics.  But people of good faith disagree and we should respect this. Which is why there is no reason for congregations to be political mono-cultures.

July 17, 2012 Sermon on Salome, Herod, and the Beheading of John the Baptist
Recent Comments
0 | Leave a Comment
Browse Our Archives
Related posts from Nadia Bolz-Weber