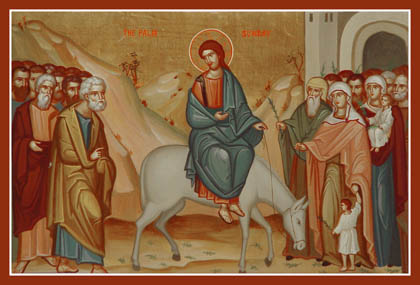 Here we go.  It’s Palm Sunday – the beginning of Holy Week. The day we remember Jesus’ so-called triumphal entry into Jerusalem. And once again, I am confronted with my own cynicism AND I’ve been thinking a lot about regret this week.  Which is a real winning combination.

In an act of morbid reflection, I’ve been thinking about some of the more stupid decisions in life.  Events and choices that when I look back on them I cringe. The perm my mother gave me when I was 10. That boyfriend who was mean to me who I kept around for way too long. That horrible tattoo some junkie gave me when I was laying in his apartment.  The thing I did that one time. The promise I never kept.  There are so many regrets to choose from.  Sometimes even my good intentions still ended in a broken relationship.  Sometimes I was just mean and selfish from the get-go. We all have regrets but while some of my mistakes are undeniably some real doozies,  unlike some of you. .. The one mistake I never ever made …was having big hair in the 80s. You know who you are.

But I wonder if the nature of regret, and the practice of morbid reflection itself,  is in some way rooted in the idea that we think we are different now. And were we in the same situation, knowing what we now know, we would never choose to steal that toy when we were 12, or drive drunk when we were 20 or ever ever have bad hair.

We like to think it’s true, that given the opportunity to go back and do things differently, we would.  We would, as improved, wiser people, make completely different choices. Because we are better versions of ourselves now.  And I kind of think that’s true and I kind of don’t.

I mention this because I realized this week how uncomfortable the Palm Sunday story always makes me.  It’s a feeling not unlike the regret I feel when thinking back on the stupid things I’ve done. And just like when I think about that home perm my mom gave me, The Palm Sunday story totally makes me cringe.

Every year, on this, the first day of Holy Week, as we read about the fickle crowds waving their palms and laying down their cloaks and shouting hosanna in the highest to the guy riding into Jerusalem on a donkey – or a colt, or whatever- an unimpressive animal, and I do, I cringe.  Like I’m just a little bit embarrassed for how sure they seem of themselves and how miserably they are about to fail when put to the test. I hear of the celebration that day and cringe knowing how quickly  the shouts of the fickle crowd go from hail him to nail him. And I think to myself “they are only hailing him as a king because they don’t get it.  They don’t know what’s about to go down, so really, it’s all just empty praise”

That day the multitude of the disciples – the same ones who will deny and abandon him were praising God joyfully with loud voices for the great deeds of power they had seen and they were shouting Hosanna…, and praising God is great but In his famous poem Murder in the Cathedral, TS Elliot said

Tis the greatest treason to do the right thing for the wrong reason.

Yeah, their triumphant celebration feels regretfully treasonous to those of us who know how this all is about to play out.

So, in a way, I find myself wishing I could travel back to that day outside Jerusalem, knowing what I know and try and stop it. Kinda like I want to travel back knowing what I know and try and stop my 20 year old self from making just about every decision she ever made. Or at the very least, were I one of his disciples I like to think I’d be more reasonable and not lose myself in ecstatic praise of the guy right before turning my back on the guy.

That’s what is so melancholy about Palm Sunday to me.  We know what’s about to happen.  The betrayal and denial and abandonment.  The monkey trial and the beating and the carrying of the cross.  The nails and the spear and the sour wine

So all that joyful shouting just feels embarrassing in the shadow of what’s to come.

We may be tempted to think that we are different from the faltering disciples. We may cringe at their so-called triumphal entry into Jerusalem because we are in the special position of  knowing what’s about to happen.

But the thing is, they did too.  At least they did if they were paying even the least amount of attention to Jesus.  He told them more than once that this was all going to happen.  He’d do something really cool, like heal someone or some other act of power and his followers would be like hell yeah! And then he’d take the opportunity to say that he is going to be betrayed into the hands of the authorities and then suffer and die.  We don’t know more than they did because he kept telling them this was about to happen.  And before we blame the disciples for not stopping it, we should remember that there was one guy who stepped in, one guy who did what my instinct would be which is to try and put a stop to such a pathetic and preventable death.  It was Peter.  Peter did what my impulse would be which is to say God forbid.  Don’t go into Jerusalem, Jesus. Because that’s where the prophets get themselves killed and you’re too good to lose.  Too peaceful.  Too loving for that kind of thing.  Surely we can do something about this.  But Holy Week was an unstoppable march of events and when Peter tried to talk Jesus out of it, Jesus didn’t pat him on the back and say You know you’re right.  Thanks friend.  Not even close.  Jesus said Get behind me Satan.

Because no amount of improved humanity could have stopped it.  No good intentions, no nobility, no sin avoidance, no piety.

Nothing could have stopped this Pascal mystery of God and humanity. No amount of super-good discipleship or wisdom or hindsight would make a lick of difference to God’s determination to draw all people to God’s self through Jesus lifted high and on a cross.

See, we are no different than the shouting crowds – those that do the right thing for the wrong reason or those who do the wrong thing for the right reason.  There is no better class of improved people.  There are just people.

Because it had to happen like this.   When the Pharisees told Jesus to stop his disciples from such an embarrassing display, he said that were they to stop even the stones would cry out. So there had to be crowds who shout praise  and friends who betrayed and followers who denied and women who wept and soldiers who mocked and thieves who believed. It would have happened like this even if the Jesus event were happening now instead of then.  Even if we knew everything in advance – were we the ones on the street we too would shout Hosanna and a few days later shout crucify him.  And that’s the good news when it comes down to it. Because these people of the Holy Week story are we people.  And we people are the likes of which God came to save.  God did not become human and dwell among us as Jesus to save only an improved, doesn’t make the wrong choices kind of people.  There is no improved version of humanity that could have done any differently. So go ahead. Don’t wait until you think your motivations are correct.  Don’t wait till you are sure you believe every single line of the Nicene creed (no one does).  Don’t worry about coming to church this week for the right reasons. Just wave branches. Shout praise for the wrong reason. Eat a meal. Have your feet washed. Grab at coins. Shout Crucify him. Walk away when the cock crows.  Because we, as we are and not as some improved version of ourselves…we are who God came to save. And nothing can stop what’s going to happen.

March 11, 2013
Sermon: The Parable of the Prodigal Father
Next Post

March 28, 2013 5 years ago on Maundy Thursday I preached my first sermon at HFASS. There were 8 of us. Here it is.
Recent Comments
0 | Leave a Comment
Browse Our Archives
get the latest from
Progressive Christian
Sign up for our newsletter
POPULAR AT PATHEOS Progressive Christian
1