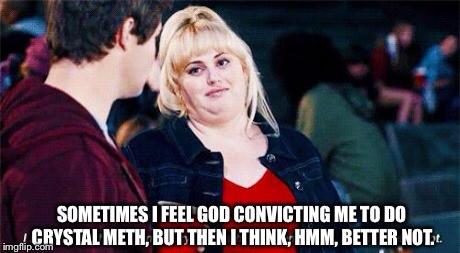 Bethany started a hilarious meme this week on Facebook.

One of you recently forwarded me an email from someone who you haven’t heard from in years, who suddenly came out of the woodwork to inform you that God “put it on her heart” to basically shame you for your sexual orientation. …You know, because obviously that’s how God spends most of God’s time these days.

But – as much as I wish I could pull it off, if I were to say that “God convicted me” to tell my friend Clayton to get rid of his hand-guns it would of course be another example of what in my previous sermon I called using Jesus to co-sign on my own hang-ups.

My very favorite retort of this kind of nonsense comes from the 12 Steps and 12 Traditions. In a book of the same title we are warned that people who are so certain of God’s direct desire “may have forgotten the possibility that [their] own wishful thinking and the human tendency to rationalize have likely distorted [their] so-called guidance. They force their own will into all sorts of situations with the comfortable assurance that they are acting under God’s specific direction”

I just don’t think I could ever be free enough from self-interest and grandiosity to reliably know that something in my heart or head is being authorized by God and not by me.

And often when people say that God is giving them specific instructions about something, it almost always happens to set up a situation where they get to then place themselves above others and not “speak into” their life, so much as speak down to them from above. Putting that person ipso facto in the position of God. It almost always seems that if God put something on your heart, it results in some kind of spiritual dominance over another person. “You” get to be over “them”.

And, man, are there a million ways of doing this.

But the thing to keep in mind here, the thing to remember when we use God to place ourselves above others is that this is exactly the opposite of what Jesus himself did. In our reading from Philippians we hear that Jesus himself, the one person in history who could legitimately pull that off, did not consider equality with God as something to be exploited but humbled himself to the point of death even death on a cross.

Now, hold that thought and we will come back to it in a moment.

Because first we have to look at our Gospel reading for today, which starts out with Jesus being asked by the religious leaders, “under what authority do you do these things?”. Now, the responsible thing to do when a reading starts like that is to figure out what “things” they are talking about. And it ends up that if you go and read this chapter from its beginning, you will discover, as I did, that it starts with Jesus entering Jerusalem.

OK, so the God who we think operates by dominating others, enters the Holy city of Jerusalem in a royal procession, not on a velvet covered litter carried by slaves, but on the back of an ass. He is followed, not by the aristocracy and religiously important people, but by the hoi polloi, the great unwashed masses, it was an absolute Parade of imbeciles. Not exactly the way a God who co-signs on us spiritually dominating others would act…but it gets worse from there.

He gathered to himself all who were unwelcomed at the center, all who had been dominated and kept out. Then he entered of all places, the temple with them; the very center itself, the place where broken people, and gender variant people, and the religiously “other” and the blind and lame were not allowed to enter. He went into the temple and he overturned the tables and chairs of the merchants and moneychangers as a sign that the exchange of money is not needed in order to have access to God. (Which – parenthetically, is a super inconvenient text to come up the night of our church stewardship meeting! So if you are considering not staying for that meeting please be assured that I HAD planned to preach that you have to give 10% of your income to the church in order for God to be pleased with you but then I read this text about Jesus overturning the tables of the temple and I thought, “dang it!” that’s not gonna work)

Anyhow, When Jesus upturns the tables and chairs, it’s like he is also single handedly changing the seating chart in the temple. Which is to say, the velvet ropes fell to the ground, the doormen were dismissed and all were welcomed. In came the lame and the lost, the lonely, the last and the least. Which was bad enough but then right after that came the children. Loud, filthy screaming toddlers.

And that’s where our Gospel text starts – the religious authorities were not amused by all of this. So they came to Jesus and said, “by what authority do you take down these barriers?”

I wonder if for so long these guys had been the ones who dominated the weak, they controlled the lame, and the blind and small children. That way they could keep out any painful reminder of the parts of themselves they wish did not exist. And then Jesus comes and invites in all the people they were trying to keep out. Just like Jesus does even today among us.

By what authority do you do this Jesus? and he responds by showing them that maybe they were looking for God’s authority in all the wrong places. Do not look for it in human power and purity codes and the lines in which you exclude that which you hate in yourself.

And we at House for All Sinners and Saints love this kind of thing, don’t we? We love an open door and an open table and as well we should.

But the thing that started gnawing on me this week was all the ways that, despite my own commitment to an open door and an open table, that I still get trapped into the us and them BS. Like how I consider those who embrace openness “us” and those who oppose it as “them” and how then all I’ve done is to create another division. I think of those who say “God just put it on my heart to stand over you and speak into your life” as “them”. I think of the NRA as “them” and those who don’t ordain women as “them” and people who listen to Nickleback as “them”.

But the Gospel is only good news if it is good news for everybody. And man, is that hard to swallow.

But strangely, it really is good news that there is no room to boast. Meaning, all our attempts to put ourselves in the place of God are thwarted because we get the place of God wrong. If we think that “the place” of God is one of domination and divisions, we’ve not been paying attention.

Which takes us back to Christ’s authority and the cross. Because Jesus himself, the one person in history who could legitimately pull off standing above everyone else, did so – but when he was above all of us, it was when he hung from the cross we prepared for him. He did not consider equality with God as something to be exploited but humbled himself to the point of death even death on a cross.

So the reason there is no “them” and there really is only “us” is not because of some lofty, self-congratulatory lived-into commitment to inclusivity and being nice. It’s because Christ has made it so. God has taken all the domination and the borders and boundaries and divisions among people and destroyed them by willingly taking all that sin into God’s own self in Jesus’ death on the cross and then defeating it all thought the glory of resurrection.

In a week when I was particularly filled with self-righteous indignation and feelings of “us” and “them” – when I was pridefully standing above and feeling spiritually superior to those who, unlike me, were clearly not taking the high road, this all sounded like really good news. Because keeping score, and knowing where I stand above or below others, and maintaining divisions is just so damned exhausting. So I am grateful to again come to this table of God’s grace where there are no doormen, there is no them, there is only us and know that it is Jesus and not me that has decided this.

Because what was true then is still true today. Jesus still calls the tax collectors and prostitutes and housewives and social workers and Pharisees into the very heart of God. So come and join me at his table, at this holy of holies, not because you have made it past the velvet ropes, but because the ground at the foot of the cross is level and there is room for all of us. Thanks be to God. Amen.

October 23, 2014 Sermon on Suicide, Caesar, and Beautiful Newborns
Recent Comments
39 Comments | Leave a Comment
"So this is why you're shrinking faster than the polar ice caps, right?"
Nixon is Lord Don’t Forget Our Job – A ..."
"How could you possible know?Why should anyone care?"
Nixon is Lord The Virgin Birth: Fact, Fiction, or ..."
""I have seen the Lord"ever since the Good News of the Resurrection was NOT announced ..."
Christiane Smith The Denver Statement
"p.s. I have not experienced this where I attend worship and doubt I ever will. ..."
Kristine Gabster Meaningless Church Jargon
Browse Our Archives
get the latest from
Progressive Christian
Sign up for our newsletter
POPULAR AT PATHEOS Progressive Christian
1

Evangelicals, you have some denouncing to...
Grace-Colored Glasses
Related posts from Nadia Bolz-Weber