“In The Beginning”: A Sermon on the Occasion Of Paula’s Baptism 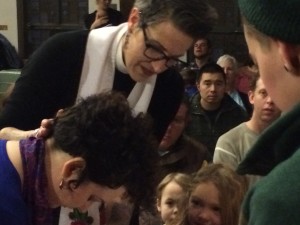 Some of us in this congregation were baptized as infants, some as children some as teenagers, some as adults and some of you – and I’m not naming names, but some of you were baptized more than once. As for me, I was 12 when I was baptized and I remember so much of it…I remember wearing white sandals, and how the little golf pencil felt in my hand as I sat up front at church, so many eyes on me as I filled out the little card that said “I desire to be baptized”. I remember the walk up the stairs to the little room where the women would change into baptismal robes. I remember the strong hands of the man who was baptizing me and how the water wasn’t as cold as I thought it would be.

It would be just 4 or 5 years later that I would break with the church of my upbringing – and forget about my baptism entirely, since it took place in a church I no longer felt comfortable in or even agreed with in any way.

My sojourn away from Christianity lasted 10 years until I discovered Lutheranism and this beautiful grace-based theology and our gorgeous liturgy and it felt like I was choosing to be a part of a Christian path that just felt right to me and with great excitement I told Pastor Ross Merkle at St Paul Lutheran in Oakland that I wanted to be baptized. I was crestfallen when he said that he couldn’t do that since I was already baptized. “Nadia” he said to me, “Baptism is always God’s action upon us, no matter the circumstances. Which means that baptism is for you, it’s just not about you so it doesn’t matter that yours happened in a church you ended up leaving. Baptism is about God”

So, dear Paula, I thought that in all fairness, maybe I should tell you a few things about this God who just acted upon you. And given our first reading for today, I thought, what better place to start than at the beginning. Since Baptism is a beginning and a state of being and an ending all at once.

In the beginning When God created the heavens and the earth, the earth was a formless void and darkness covered the face of the deep while the spirit of God swept over the face of the waters. And God said, the there be light” and there was light and God saw that the light was good.

In the beginning was a God who, like a divine artist, chose to create. And nothing existed yet, so God created out of God’s own self. God, in a great act of self-giving love, chose to take up less space so that there was room for light and water and cells and sinew and earth worms and sea monsters and babies.

In the beginning, God, who is the source and ground of all being created the heaven and earth and sea.

I’ve heard it said that all the water on the earth today is the same water that existed at the beginning of time. What evaporates returns to the clouds from which water in another form is then rained down again on earth. We drink the same water that the triceratops drank. And Paula, that means that the waters of your baptism that were just now poured on your head, are actually the waters of creation…the same waters that God spoke into existence at the very beginning.

In the beginning God created all the water that is. And then created humanity out of earth and the very breath of God.

Much like there is more than one Gospel account in the Bible, there is also more than one account of creation in the Bible. Later in chapter 2 of Genesis we get a completely different version, one that is a bit less orderly in which we are told that man, (or another way to translate the Hebrew is “earthling”) so we are told that the earthling was made when God breathed into dust.

In the beginning this artist God spoke the world into existence and there was light, and dark and water and earth and plants and animals and earthlings.

And, as we learned in school, this took awhile. Like, a really long time. But when it was done God proclaimed it good. Not perfect. But good.

In the beginning God created a good but imperfect world and populated this world with earthlings, made in God’s image – male and female. (as an aside – the text doesn’t say Male OR Female. God created them in God’s image male and female -formed from dust and the breath of God. So I doubt that a God who created a good, but imperfect world is one who expects perfection from us. As though we can somehow through our efforts or self awareness or idealism improve upon what God has created. I don’t understand why the Christian moto isn’t, if good, is good enough for God, then good is good enough for us.

In the Beginning, God created a good but imperfect creation filled with ambiguity and beauty. So, Creation is on-going. Creation takes a long time and our own creation takes our whole lives. And know that when you die and return to the source of your being, that death is simply what we Lutherans call “having completed our baptismal journey” for then you are no longer water – but return to dust and the very breath of God.

A third account of creation happens in the first chapter of John’s Gospel. It goes like this:

In the beginning was Christ who would walk the earth as Jesus of Nazareth, the Word Made Flesh. The Word of God was made flesh and born to the least likely young woman in the least impressive way. In the beginning was the Word of God made flesh who kept really impolite company. Rank truck drivers, proud hedge fund managers, anxiety ridden sex-workers, ambitious seminary professors, and people who loved their drink. In the beginning the Word was born and kept interesting company and said super confusing things that to this day we are still trying to figure out. The first shall be last, the last shall be first, those who seek to find their life must lose it, Blessed are the poor of spirit, love your enemy, pray for those who persecute you and of all things: your sins are forgiven. You are so completely freed and forgiven and you are not defined by your mistakes.

In the beginning was the Word made flesh, the Living Water, who kept interesting company and taught some counter-intuitive stuff and preached forgiveness of sins and also healed the sick and raised the dead and fed the hungry and that was more than we could bear and we betrayed and denied and accused and flogged and crucified him. And this Word of God made flesh, still spoke only forgiveness. And here’s the thing, death could not contain this holy and defiant and pure love of God and on the third day he defeated death and rose from the grave and then spent a little time really freaking out his friends and devouring a lot of snacks before ascending back to the Father.

So as it is, the best way to tell you about this artist God who acted upon you in these baptismal waters of creation, is to say that Jesus came and in his almost disturbingly physical existence showed us what God looks like, not in some ethereal alternate spiritual plane but right here in the midst of our physical, embodied earthling reality.  Jesus said here’s what being born of water and spirit looks like… it looks like not worrying about what we’re to eat or drink; it looks like loving the bodies of other people who, like us, will die; it looks like touching human flesh as if it’s holy instead of worrying that it’s unclean, and it looks like what we are about to do: it for sure looks like breaking bread and drinking wine with all the wrong people.

So what does this baptism mean? It means that your belongingness is to the God who created you and all that is. It means that you are baptized into the death of Jesus. You are baptized into the Word Made Flesh. Why? So that you might become Flesh made Word. So that you might become an agent of what you have received: God’s agent of grace, acceptance, forgiveness and mercy. Amen.

Post Script:  I began by talking about how I walked away from my Church of Christ upbringing, but the fact is, anyone who knows me well will say that there is part of me that will never walk away from it entirely, and so, I am ending this sermon with brace yourselves… an altar call as I am sometime wont to do. If you have never been baptized, these baptismal waters of creation are so completely for you. Come find me during open space we will totally do it right now. Amen. 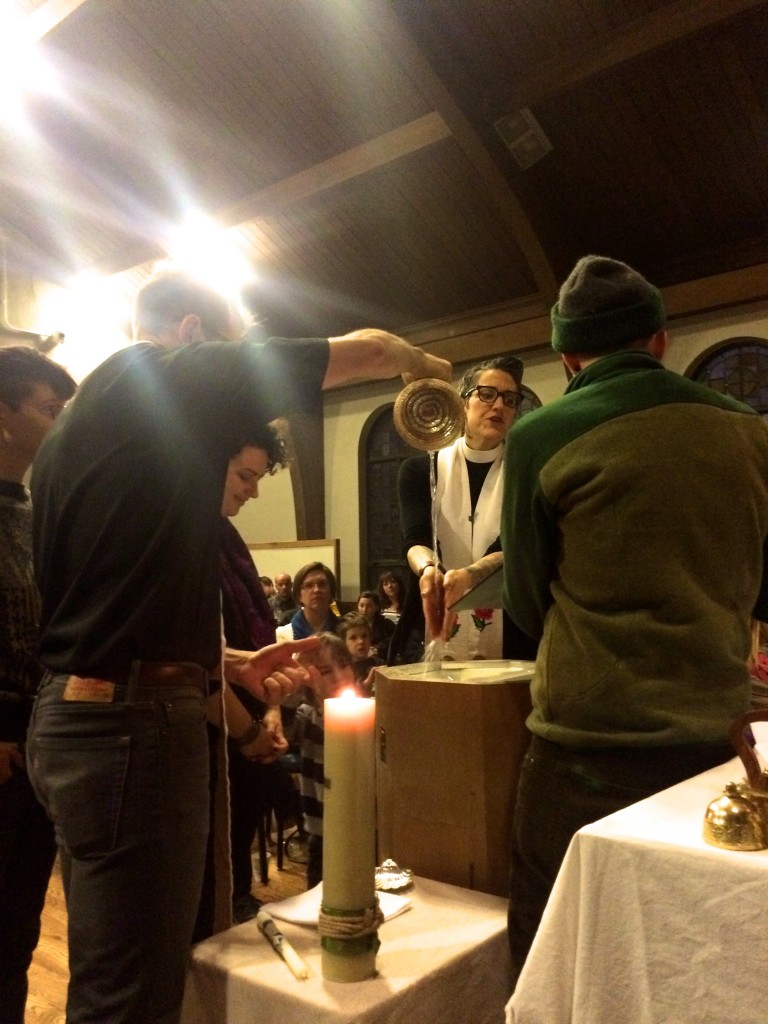 December 24, 2014
Some Questions for Mary; an Advent Sermon
Next Post