A Pentecost Sermon on The Great Unfinished Story

A Pentecost Sermon on The Great Unfinished Story May 28, 2015 Nadia Bolz Weber

(If you don’t see the embedded player, click here to listen)

We know that the whole creation has been groaning in labor pains until now; 23and not only the creation, but we ourselves, who have the first fruits of the Spirit, groan inwardly while we wait for adoption, the redemption of our bodies. 24For in hope we were saved. Now hope that is seen is not hope. For who hopes for what is seen? 25But if we hope for what we do not see, we wait for it with patience.  26Likewise the Spirit helps us in our weakness; for we do not know how to pray as we ought, but that very Spirit intercedes with sighs too deep for words -Romans 8

A couple months back, my seatmate on an airplane asked why I was traveling. I said that I was a speaker – “Oh”, he said, “Motivational?”

“Not particularly” I answered and went back to my magazine.

Here’s an example of why I answered that way: I thought that today, to celebrate Pentecost, I’d preach a little inspirational sermon titled: Your Life is Hopeless and Won’t Last Long. Now, before you judge me for being such a cynical GenXer – you should know that when I say your life is hopeless and won’t last long I am simply honoring a vow I made at my ordination: among the things the Bishop asks us as clergy to do and teach and uphold, is the promise that we will not offer our people illusory hope.

So here we go: your life is hopeless and wont last long: a sermon about birth and death. I love, I mean, I adore the passage we just heard from Paul’s letter to the church in Rome. Specifically I love that he speaks of the groaning of women in labor and of the spirit interceding in our weakness with sighs too deep for words. One reason I love the phrase so much is that I suspect that those sighs too deep for words are not unlike the sounds we hear sometimes in this room when our prayers are being read aloud. Like just last week when there was a prayer read that asked for God to be with a 15 year old girl who was having a baby this week. I audibly reacted to that prayer. I actually made a sound that felt involuntary. I thought of my own teenaged daughter and how hopeless it would feel were she to be a mother instead of a Sophomore right now.

My own projections about what the story of a pregnant 15 year old meant were instantaneous – so much so that I almost missed the other sentiment that accompanied the prayer. It was a request that God make the event of the birth of this child a glorious one full of unseen blessing. A request that God’s story unfold around this child having a child. This is where hope in what is unseen differs from simple optimism. To be optimistic is to be convinced that everything will be just fine with her and her child. To have hope is to know that even in the inevitable struggles and hardness of life, that the story of God and God’s people runs deeper than the current plot points we see in front of us.

Before the disciples met Jesus they all probably felt they knew how their story was going to unfold, based on what they saw, they were powerless to be anything but a fisherman as was the case with Peter, or a tax collector in the case of Matthew or a woman of both means and demons as was the case with Mary Magdalen. Then that story changed when Jesus walked by and said follow me. And then based on the new data, the current plot points in front of them maybe they again were convinced the story meant something specific – that Jesus would restore the kingdom of Israel. But when their beloved teacher was arrested they must have felt powerless once again. When he was flogged and hung to die and laid in a tomb they had to have thought that was the end. Because death seems to be a pretty definitive plot point in any story. But the story kept changing on them. No matter what data they had in front of them based on what their lives looked like in that moment, something stronger, deeper and more beautiful was moving among them, sweeping them up into God’s story. Don’t get me wrong, their grief was real…just not as real as resurrection.

It’s so easy to see the tragedies and endings and hardship and diagnosis all around us as the end of the story – but, not unlike those who mourned as Jesus was laid in his tomb, we are terrible story enders – putting – as some would say – a period where God places a comma. God is still writing, still sighing, still loving us and all that is into redemption.

Dave Lose mentioned this before…our sacred text starts with Genesis, the beginning – and ends with Revelation, the ending, and in the middle is the acts of the apostles which is unfinished – that is us – we are in the middle of this story that is still being written and that is where our hope lays. And to be clear, when I say that after Pentecost there was more, in all fairness you should know that doesn’t means a happily ever after ending. Happily ever after is optimism gone astray. So you should know, in the story of Acts, after they received The Spirit…things didn’t work out great for them. There were imprisonments and shipwrecks and persecution – I mean nothing that sounds like a charmed life – nothing that any sane person would HOPE for. And yet they had something– which ran deep. They had hope. These early disciples did not judge their lives and their relationship with God according to how awesome things looked in the moment. They knew that no matter what, the story wasn’t finished. That’s real faith and real hope.

And when it’s real it always looks a little bit crazy I learned a couple days ago of the impending death of Phyllis Tickle, a woman of deep faith, who taught so many to pray, who wrote so beautifully of the Christian faith and who, even as she faces death, does so with great hope, not optimism – Optimism would look like her thinking that radiation treatment will reverse stage 4 cancer. Hope, on the other hand, hope means she is someone who knows there is more. She knows that death does not mean her story is finished. No, my friend Phyllis is not afraid of death for she is already pulled way too deeply into the arms of her loving savior to bother with wishful thinking.

Perhaps it is in these moments, the moments facing a 15 year old girl and an 80 year old woman this week –these moments of birth and death are when we are closest to God’s story – in these moments when a first or last breath is taken, our smaller stories fall away- I mean, when our mom is dying the fact that we resent our brother because he owes us money doesn’t matter – when the groans of a laboring mother turn into the cries of newborn, doesn’t all the BS in our lives just seem to matter less? For so much that we experience as definitive is really temporary.

Our health, our relationships, our wealth – all of even the so-called good things in life don’t last … but nor does the sorrow or suffering. Those plot points in our smaller stories don’t last, but what remains is this thing that the Holy Spirit revealed to those in that room 2,000 years ago and continues to reveal to us today: our hope does not rest in the plot points of our lives, in the things we see, in the things that’s don’t last.

We hope in what is not seen: the eternal never ending love of the God from who we came and to whom we return. Ashes to ashes, dust to dust. First breath to last and beyond. That is anything but illusory hope. Amen. 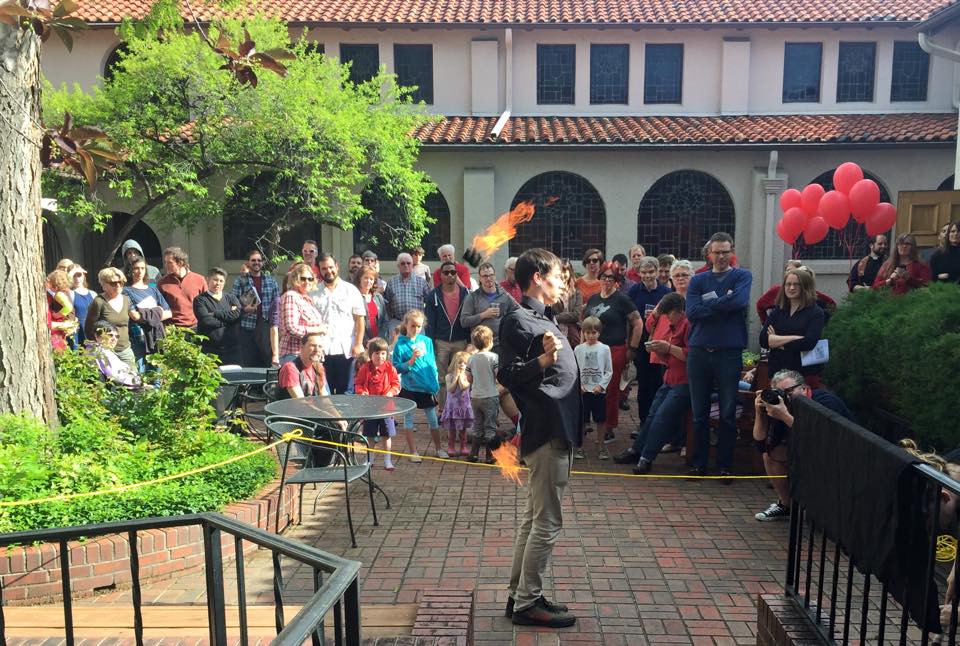