Fear vs Love: a Sermon about 2 Different Kinds of Men.

There was this Christmas tree topper ornament that for years made the rounds through my family as a gag gift. It was supposed to be a beautiful angel but what it really was was a terrifying abomination: a winged creature in a cheap lace dress that held a Christmas light in each of it’s hands and when you plugged it in, it’s arms and head moved slowly back and forth. Super creepy. The year after I received it, I re-wrapped it and gave it to my brand new sister in law as a welcome to the family gesture. She graciously pretended it was lovely when she opened it on Christmas morning but my mother Peggy quickly said “Elizabeth, you don’t have to pretend to like that thing, Nadia’s just being ugly”.

The next year Elizabeth gifted it to my daughter Harper and several years after that, after I was pretty sure everyone forgot about it, and Elizabeth and my brother had a daughter of their own, the same angel sat wrapped under the tree with my baby neice’s name on the tag.

Pretty ones bore me but I love terrifying angels to tell you the truth. Mainly because, as I’ve said before, if the first thing angels say when they appear to humans is “don’t be scared”. I’ve always assumed angels were more frightening creature and less Hallmark cherub. But this week as I looked at this text about Herod and the Slaughter of the Holy Innocents, or as I like to think of it, the story of Joseph the Protector, I wondered if when angels say “do not be afraid” that maybe it isn’t a command or a suggestion or like an instruction for self-improvement. Maybe it’s the angelic version of a spell, or like using the Force. Like it’s less advice for “living your best life now” and more these aren’t the droids you’re looking for. And poof those they speak to are not afraid.

I mean, I know it’s hard for us to get out of the mindset of everything in the Bible being an instruction for how to be good – how to be righteous. And I know it’s New Years Day when we collectively believe in the delusion that this year we will somehow have the resolve to make ourselves into better people. And maybe “be less afraid” is even on our list of resolutions, But does becoming less afraid really happen like that? Can we through a force of will remove our own fear like we remove gluten from our diets?

I just know that when fear fills my own heart and brain – then even if someone says, hey don’t be afraid I’m not like, oh wow thanks, I hadn’t thought about that possibility but now that you’ve said don’t be afraid I totally wont be scared anymore.

This is why I became obsessed in the last couple days with the idea that maybe there is a heavenly power, a power greater than ourselves, a divine spirit from God that does for us what we cant do for ourselves. John says that perfect love casts out fear. So I choose to believe that these angels who come from God with messages for us come in the form of love. Love that is so forceful it comes out at us like those cans of compressed air that blow the muffin crumbs and cat hair out of my computer keyboard so it can actually function the way it is supposed to.

And the thing is, if these angels have the power in love to change something in us, then why is fear the thing that needs changing? I mean why don’t they come and start off by saying “be not a jerk” or “be not an idiot”? Why “be not afraid”?

OK, so Here’s why I think this is maybe an important part of the story of The Slaughter of the Holy Innocents.

Because in some ways this is the story of 2 men.

Herod, who is a ruler on a throne of power,

and Joseph who is a peasant in an unconventional marriage.

One man is powerful and one man is not

And yet the text only describes one of these men as being afraid. And it wasn’t the peasant.

Matthew’s Gospel tells us that King Herod made the magi tell him where this baby was because he was frightened. Frightened of a baby. Threatened by a horoscope and a newborn. And this fear, this fear that his position in life is so tenuous that it must be fortified by sacrificing whoever it takes – which is not a theory by the way, this Herod guy literally killed two of his own sons because he felt threatened by them. His own sons. Fear that what he had could be taken away, or fear of not getting what he wanted turned him into a murderous monster. So much so that when he cant quite locate the right baby, the one that is so threatening to him, he just sends for all the children 2 and under in and around Bethlehem to be killed. Take that in. This is what fear does. Just as an aside I thought all week long – What is more threatening to the vulnerable than a world leader with a fragile ego and a lot of power?

This is what fear does. Fear disguises itself in so many ways: as greed, hate, isolation, addiction…the list is endless. But in the end fear is at the root of all of it. And while you and I might not be murderous tyrants, none of us are free from the effects of fear in our lives. It keeps us isolated and small and it steals away possibility.

But in Joseph we see a different kind of man than Herod. Joseph was not afraid.

An angel came from God and spoke love, was love, embodied love, sought to protect love – like a divine can of compressed air, and this cast out Joseph’s fear so that he could function the way he was intended to. And here’s one clue – one way that we can know that Joseph was not afraid: he didn’t bat an eye when the angel said that his baby and wife weren’t safe so he should take his family to Egypt.

The place his ancestors were enslaved. The place that God rescued his people from slavery.

Herod’s fear caused death and Joseph’s fearlessness protected life. Of course the irony is that Herod feared this baby for all the wrong reasons. The Christ child did not knock Herod off his pathetic little throne. History took care of that.

No. As this child grew he knew he had his own throne. Jesus of Nazareth did not overthrow Rome, he laughed at Rome. He saw Rome for what it was: temporary. Fleeting. Harsh and demanding and tyrannical, yes, but temporary.

And you know what?

There are angels hovering round us, good people of God. Perhaps sitting next to you, going up to communion right behind you, making noise on the children’s rug, passing the peace with you. There are messengers of love all around. And again, and forever, they say: do not be afraid. Do not be afraid. For in the heart of God there is enough love to cast out fear. It is from this heart we come and to this heart we return and it beats around us and is shown in the shimmering love that absolutely covers this world. There is enough love to cast out our fear. And it’s everywhere.

Herods of the world, take note. 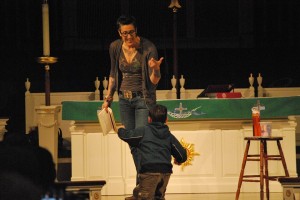 H+ 2: The Transhuman, the Posthuman, & the...
Should we Christians, Jews, and Muslims board the transhumanist train? Should we...
view all Progressive Christian blogs
Copyright 2008-2021, Patheos. All rights reserved.