McGowan is an advocate for exposing children to a variety of religions firsthand and told me that, over the years, he has schlepped his own three kids to a host of temples, mosques, churches and synagogues — all to help them understand what religion is and how it works. McGowan went to these services as an observer, not a believer, but he found the visits fascinating and worthwhile — and, he said, so did his kids. 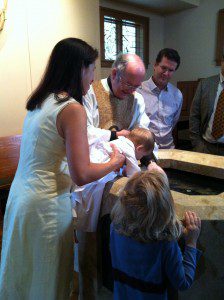 Naturally, I thought it serendipitous when, around the time of the McGowan interview, I received an invitation to attend the Catholic baptism of a good friend’s son. Such a great excuse, I thought, to show my own daughter the inside of a church.

When I explained to Maxine (then 5) what we’d be doing, she was thrilled — especially when I told her baby Alec would be sprinkled with water during this particular ceremony. In the weeks leading up to the big day, we chatted a bit about what it meant to be baptized. Maxine wanted to know, for instance, why she had not been baptized. I told her that baptisms were a way to symbolize a child’s membership into her parents’ church, and that her parents didn’t belong to any church. That seemed to satisfy.

On the day of the baptism, my sister and I, along with her son and my daughter, loaded into one car and headed to the church about an hour away. Halfway there, Maxine started to get antsy. “Are we there yet?” she asked a bunch of times, despite the fact that I kept telling her she was being so cliché.

Finally, the car came to a stop for the first time since we’d left home. Maxine was ecstatic. She rose up in her car seat, her face bright and smiling. She took in everything around her.

“Is this where Alec is going to be baptized?” she asked, hopefully.

“No, honey,” my sister replied, matter-of-factly. “This is a toll booth.”

By the time we got to the church, she was back to being fully charged. While other children squirmed in the pews, looking everywhere but forward, Maxine literally (and by literally, I mean literally) sat on the edge of her seat, riveted by the priest’s every word. She seemed to watch with the same level of obsessive interest she only ever afforded “Phineas and Ferb.”

When it was our time to rise and see Alec receive the sacrament, Maxine squeezed in for a front-row view. As you can see in the picture above, she was easily close enough to be baptized by proximity. It was hard not to wonder if I had given birth to a natural-born Christian.

After Alec and the other babies had been blessed, the priest lit some candles and read from the Bible. Then me made his closing remarks, and people began to collect their things. That’s when Maxine turned to me.

“But when are they going to start throwing water at each other?” she asked, clearly confused.

“They don’t throw water at each other,” I said.

Then, as the dark shadow of disappointment moved in, I watched my little girl’s face fall for the second time that day.

No wonder she’d been so riveted by church, I thought. She’d expected a water fight. 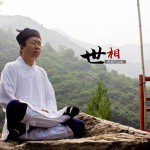 July 22, 2016
Taoist Priest Delivers Case Against Converting Kids to His Religion
Next Post

July 29, 2016 'Patriotic American Muslim' Delivers Speech for the Ages
Recent Comments
0 | Leave a Comment
"God is real and I had a near death experience through a total heart stop ..."
OurSaviorLives Death is the One Thing that ..."
"Of course, where else are they going to be taught how to say the Lord's ..."
a_b704 Do Kids Really Need an Atheist ..."
"Thanks for sharing.Keep it up Indian Festival Powder"
Florida Freedivers Quick! What the Hell is Holi?
"What statistics do you have that shows the rate is "low"? If we're just guessing ..."
Keith Colter Private: ‘My Classmate Told Me I’m ..."
Browse Our Archives
get the latest from
Nonreligious
Sign up for our newsletter
POPULAR AT PATHEOS Nonreligious
1