Is It Possible to Be ‘Neutral’ When Talking About Religion?

Is It Possible to Be ‘Neutral’ When Talking About Religion? October 24, 2014 Wendy Thomas Russell

Last week I suggested that the world would be better off if more people presented religion to children not from a standpoint of indoctrination, but from a standpoint of education — that is, in a relatively neutral way. The post prompted a skeptical commenter to question whether this was possible. He said:

How do you ensure that your representation of the different religions out there is “neutral”? Given your atheism, how do you make sure you’re representing other faiths accurately?

This is an important question, and I’m glad he asked it.

For 15 years, I was a reporter for various newspapers. Most of that time was spent covering criminal courts: arraignments, preliminary hearings, trials, sentencings, you name it. I covered hundreds of them. So many that by the end of my career, I was on a first-name basis with most of the prosecutors, public defenders and judges in my local courthouse. Did I have opinions about these individuals? Yes. Did I have opinions about their cases? Yes. Did I ALWAYS believe, by the end of each case, that I knew whether a defendant was guilty or innocent? Oh, yeah.

But did my own personal opinions prevent me from writing about each of these cases in a fair, balanced and accurate way? Absolutely not. Presenting a balanced story so that people can make up their own minds about the truth is what good reporters do, and, frankly, it’s not that hard.

When I suggest approaching religion from a relatively neutral standpoint, I am suggesting that you put your own opinions to the side and present religion in the most fair, balanced and accurate way you can. Here are some tips for how to do that.

2. When something is factually wrong, call it out. Being balanced does not mean presenting both sides as equally valid. Facts are facts, and it’s fine to present them as such. Taking the above example, you might say: “Some people believe the world began 6,000 years ago. Scientists now know for a fact that the world is billions of years old.” This is the truth. No need to beat around the bush about it.

3. Give both sides a chance to make their cases. Even if the other side’s case holds no water (in your opinion), be sure to share it to the best of your ability. Remember, if you have to force someone to draw a certain conclusion, or indoctrinate them into a certain belief system, then your conclusion probably isn’t all that valid. Let’s go back to our example: “Some people believe the world began 6,000 years ago. Scientists now know for a fact that the world is billions of years old. But the Bible says otherwise, and a great many people believe the Bible is 100 percent true.”

4. Don’t generalize or make assumptions. This is a biggie in reporting, and it’s a biggie here. You can generalize and make all the assumptions you want IN YOUR HEAD. But please don’t do it with kids. They are looking to you for answers, and will believe what you say. So when talking about people who disagree with you—whether they they atheist or fundamentalist— watch your language.

4. Acknowledge that you don’t know it all. Few of us are religious scholars. Even fewer are religious scholars who claim to know what all people believe and why. As humans, we are all limited to what we have been taught, or what we have observed or experienced firsthand. So let’s shoot for humility. Yes, it’s almost impossible to fathom how anyone could oppose scientific or social progress the way many religious people seem to do. It’s hard to feel compassion for individuals whose religious beliefs point the Earth in the direction of doom (not to mention any names, Sarah Palin). But when we admit that no one can walk in someone else’s shoes, and that no one has all the facts or all the answers, it helps us take a step back for long enough not to call Sarah Palin a fucking idiot in front of our young children. 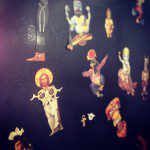 October 20, 2014
And the Religious Literacy Award Goes to... Design Your Own Deity Magnet Set!
Next Post

October 27, 2014 5 Reasons Not To Indoctrinate Kids Against Religion
Recent Comments
0 | Leave a Comment
"Hi Jackie, Similar experience here minus the kiddo. My parents literally cornered us on the ..."
Esther 7 Tips for Dealing with Religious ..."
"...Columbus was not a heroic discoverer, but an amoral criminal...Don't forget that he was a ..."
Eberhardt von Hessen In 1492, Columbus Did Things One ..."
"An obvious left wing slant on Catholicism by someone who obviously is not Catholic and ..."
jonny 12 Simple Differences Between Catholics and ..."
"Holi Festival is regarded as a spring festival of India that welcomes spring after seeing ..."
Sonampurohit Quick! What the Hell is Holi?
Browse Our Archives
get the latest from
Nonreligious
Sign up for our newsletter
POPULAR AT PATHEOS Nonreligious
1

Pastor left puzzled as to why...
The Freethinker
Related posts from Natural Wonderers