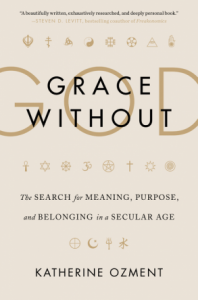 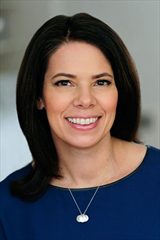 A few years ago, Boston Magazine writer Katherine Ozment wrote a piece called “Losing Our Religion,” a story about the effect that the rising population of Nones were having on the next generation.

It was a great piece, and well-read, and ended up laying the foundation for Ozment’s new book — Grace Without God: The Search for Meaning, Purpose and Belonging in a Secular Age — due out next week.

I’ve known Ozment for a while now, and can attest that she is as wonderful a person as she is a writer. She also was kind enough to be on the receiving end of a great Q&A we conducted recently via email. We discussed morality, the meaning of “grace,” her brother’s suicide, her (adorable) daughter’s developing identity, and how Lawrence Krauss helped her grapple with matters of the soul.

Q. Grace Without God is your first book. Why did you decide to write it?

A. There’s a saying that you should write the book you want to read, and that’s very true in this case. This is a book I wish I had long ago. Writing it forced me to wrestle with questions that had been lurking in my mind for ages but that I’d never really addressed directly. Once my kids started asking me the big questions about things like life’s meaning, God, death and religion, I realized I needed to formulate answers — not just for them but also for myself. So my kids’ questions, in particular the one my son asked that opens the book, were like the ignition for a project I think I spent much of my life preparing to write.

Q. I’m fascinated by the word “grace” — which is a word with both religious and secular connotations. What does “grace” mean to you?

A. I think of grace as an acute awareness of the incredible experience of simply being alive. To me it’s a welling up of awe and wonder and gratitude. Like a lot language used for profound human experiences, “grace” is often used in its religious connotation, as in “God’s grace.” One of my arguments in the book is that religion shouldn’t have dominion over such profound human experiences and that those of us who aren’t religious can incorporate these ideas and terms as well. To me the experience of grace isn’t connected to a belief in God, but I suspect it’s similar to the religious feeling of grace. If we peel back the labels, these are essential human experiences we all share.

Q. You interviewed many people all over the country for this book. Who made the biggest impression on you, and why?

A. That is a tough one. I loved talking with everyone I met. But if you are going to force me to pick just one, one highlight toward the end of my research was meeting with Lawrence Krauss, the renowned theoretical physicist and outspoken atheist. For many years after leaving religion, I had a hard time not thinking of myself as having a soul that would live on in an afterlife. Krauss told me that it’s really actually better that the soul doesn’t go on. He was very funny about it at first. He asked: “Do you really want to do anything forever? Wouldn’t you get tired?” But then he turned more serious and said that none of us should have ever existed in the first place. Science has shown that our existence is so rare and unlikely, the result of a perfect storm of events; and this, to him, gives life incredible meaning. That interview was toward the end of my research, and it was very important to me to ask someone who’d thought so deeply about it. Once I had that scene, I felt I had faced one of my deepest lifelong questions.

Q. I was really touched by the story about your older brother, who committed suicide as a result of his mental illness. You said you failed to grieve fully at the time, in part because you lacked any “death rituals” in your family. If something like that were to happen now, what would you encourage your children to do that you didn’t?

A. First, I would surround my children with our closest friends and family to ensure a cushion of social support.  I would ask those people to share stories and maybe even bind them into a keepsake book — anything to create a kind of ritual or structure around our grief and a lasting memorial. I’m sure I would seek wisdom from poets and thinkers to guide us. Lastly, I would want to talk openly about my beliefs about death and the fact that others have different beliefs, and it would be up to them to someday figure out what their own beliefs were.

Q. You talk about religion as a path to morality — that “we act better when we feel we are being watched, as if by God” — particularly in cultures that “need” religion. If that’s the case, how can secularism compete with the moral authority offered by religion?

A. I think what you might be referring to is the way groups in the past, especially as they were growing rapidly, used religion to cultivate certain practices and behavior. I wrote about a fascinating book called Big Gods by the psychology professor Ara Norenzayan, which explains how the watchful god of monotheism evolved to help keep people in line after societies grew too big for people to know their neighbors and keep tabs on them. Today, we have secular structures like governments, courts and police department that monitor behavior. So, in a secular age, many of our institutions take the place of those watchful gods. And recent research has shown that whether a child is religious or not is not a determinant of their morality; what does determine morality is the parents’ moral reasoning, which even babies tune into. Our kids really are watching us and imitating our values.

Q. Assuming our kids choose to be secular, what will life be like for them? Will religion play a role in their lives? Should it?

A. I’m married to a secular Jew and was raised Presbyterian, so we celebrate the main holidays of those two faiths, albeit in a pretty secular way. We attend the bar and bat mitzvahs of friends’ children, and our son sings in a choir at school that taps religious music from around the world. So I think these little seeds of religious heritage are being planted, though less in a religious than in a cultural or historical way. I think we can learn a lot from the past and certainly we can learn so much about the world from studying religion. I don’t think religious literacy, in terms of historic facts, will diminish — though I think the felt experience of religion is going to start to be less and less common. Certainly my children have no felt sense of religion, though they know the main facts and will continue to deepen their cultural knowledge of it. For example, the other day my daughter took my phone, and I heard her in the other room say, “Siri, What does ‘Amen’ mean?” She will never know what it feels like to stand in a crowded church and say that word in unison with a whole congregation. So, that aspect will be lost on her. But what’s great is she sees herself as, and I quote, “part Jewish, part Christian, and part gymnastics.” She’s piecing together her own meaning and identity, and it’s richer in its diversity. She will always ponder life’s big questions because my husband and I haven’t given her one set of answers. I think that’s kind of wonderful.

Q. What do you hope readers will take away from your book?

A. For those who’ve been disaffected by religion or fallen away from the faith they were raised in for whatever reason, my message is one of hope. Especially for anyone struggling to find community, rituals, and a feeling of meaning and purpose, there are more and more options for finding new paths to those important things religion once gave so many of us.

A. I hope to write another book, but I haven’t landed on the exact topic yet. In my family life, my husband and I promised our kids a dog now that the pressure to finish my book is off. So my next spiritual journey may include housebreaking a puppy.

Grace Without God is available June 21 in hardcover and ebook formats. You can pre-order a copy here. 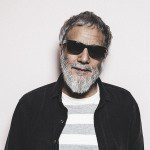 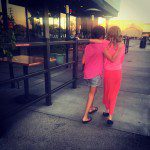 June 21, 2016 Science Stories Weigh in on Babies' Brains and Dickish Responses to Child Tragedies
Recent Comments
0 | Leave a Comment
"God is real and I had a near death experience through a total heart stop ..."
OurSaviorLives Death is the One Thing that ..."
"Of course, where else are they going to be taught how to say the Lord's ..."
a_b704 Do Kids Really Need an Atheist ..."
"Thanks for sharing.Keep it up Indian Festival Powder"
Florida Freedivers Quick! What the Hell is Holi?
"What statistics do you have that shows the rate is "low"? If we're just guessing ..."
Keith Colter Private: ‘My Classmate Told Me I’m ..."
Browse Our Archives
get the latest from
Nonreligious
Sign up for our newsletter
POPULAR AT PATHEOS Nonreligious
1