The Story of Purim 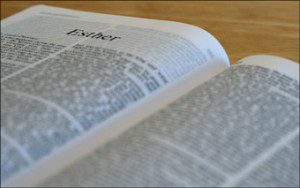 When the Old Testament’s Book of Esther begins, a Persian king named Ahasuerus  has just come up with a superbly mature idea: to throw a big drinking party for all the men in the palace. At this party, he instructs the men, to “do according to every man’s pleasure.” Kind of like one, big ol’ bachelor party. And, so that the women would not be left out, Ahasuerus allows his queen to throw a separate party for the palace gals. (What a guy.)

So here they are partying it up when the king decides he wants to show off his wife and asks her to come join his drunken brood. She refuses. He gets pissed. And, at the urging of his trusted advisor Haman (BOO!), the king immediately begins looking for another bride — a younger, virgin bride — to replace his rebellious queen.

Among the girls brought to the palace for the king’s perusal is a Jewish girl named Esther (YAY!), who had been brought up by her much-older cousin Mordecai. Mordecai has cautioned Esther to keep quiet about her faith to protect herself from anti-Semites, and she does. The king quickly falls for the kind, beautiful Esther and makes her his queen.

Meanwhile, as Mordecai is guarding the gates outside the palace, he overhears two men conspiring to kill the king. He catches them and has them arrested. The king is told nothing of the incident, but the men are nonetheless hanged for their crime.

The king is very happy with Esther — and is grateful to Haman for the part he played in this good turn-of-events. He promotes Haman and demands that citizens shower him with respect. But there’s a problem: Haman is a known hater of the Jews, and Mordecai, proud and stubborn, refuses to “bow down” to him — which infuriates the evil Haman.

Haman decides it’s time to get rid of the Jews once and for all. With the king’s blessing — symbolized in a gift of the king’s silver ring — the palace sends out letters to all 127 provinces in Persia, telling everyone that on the 14th day in the Hebrew month of Adar, all citizens are to to rise up and kill all the Jews, old and young, in their respective provinces. The attackers also are instructed to take the victims’ spoils. The date of the attack has been randomly selected — by casting lots. (“Lot” is translated as “pur,” hence the name Purim.)

Upon hearing the news, Mordecai is devastated — as are all Jews across Persia. After some back-and-forth between he and Esther via notes delivered by messenger, Esther asks Mordecai to tell all Jews to repent their sins and fast for three days. Meanwhile, she visits the king and asks that he and Haman join her for dinner that night.

When Haman arrives, Mordecai — planted outside the palace — again refuses to bow before him, which triggers the advisor’s anger anew. After dining with the royals — and being invited by Esther to dine again the following evening — Haman goes home and orders his family to build gallows on which he intends to hang Mordecai.

Later the same night, the king has trouble sleeping and asks a servant to read for him from the palace diary. One section recounts the night Mordecai saved the king’s life by capturing his would-be assassins.

“What honor and dignity hath been done to Mordecai for this?” the king asks.

“There is nothing done for him,” the servant replies.

Endowed with a terrible sense of timing, Haman is standing in the court at this very moment, waiting to talk with the king about hanging Mordecai. When Haman is invited to enter, the king surprises him by speaking first.

“What shall be done unto the man whom the king delighteth to honor?” the king asks.

Haman assumes the king is speaking of himself, so he answers by suggesting the king let this man wear royal clothes, ride the king’s horse, wear the king’s crown and be taken on horseback through the city.

The king agrees, saying: “Make haste, and take the apparel and the horse, as thou has said, and do even so to Mordecai the Jew.”

As you can imagine, Haman is incensed at this point. But he does as the king says and the next day returns to dine, as scheduled, with the king and his young queen. At dinner, Esther lays it all out. She tells the king that she is Jewish and that Haman is an enemy who wishes to kill her and all her people.

Loyal to the queen, the king orders Haman be killed on the very gallows he had built for Mordecai. (How’s that for a climax!)

At Esther’s suggestion, the king sends out another set of letters around the provinces, reversing the previous order to kill the Jews and telling the Jews to band together and protect themselves against Haman loyalists. When the 14th comes around, the Jews are ready and armed. They fight and kill thousands and thousands of men all over Persia — but touch none of their victims’ spoils.

Mordecai is promoted to something akin to prime minister and given the king’s silver ring that once had belonged to Haman. By royal order, the date of the 14th is named “Purim” and is set aside in remembrance of this Jewish victory.