‘Tolerance is on the Ballot’ — and Children Stand to Lose Big

‘Tolerance is on the Ballot’ — and Children Stand to Lose Big September 21, 2016 Wendy Thomas Russell 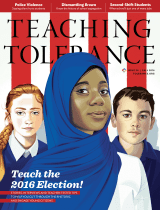 As some of you no doubt heard, President Barack Obama (boy, do I like still writing that) gave a stirring speech Sunday in which he pleaded with every African-American citizen to, GODDAMMIT, FOR THE LOVE OF GOD, GET OUT AND VOTE.

Okay, he didn’t put it that way, but he may as well have, as emphatic as he was.

And only one candidate will advance those things. Let you guess which one.

“I will consider it a personal insult — an insult to my legacy — if this community lets down its guard and fails to activate itself in this election,” Obama said. “You want too give me a good sendoff? Go vote!”

Obama’s remarks about tolerance echoed what the good folks at tolerance.org have been saying for months. The Summer 2016 issue of the group’s quarterly magazine, Teaching Tolerance, ran a story about the so-called  “Trump Effect” — that is, the increasing tendency of children to pick up on Trump’s rhetoric and use it to spread bigotry, prejudice and hate among their peers.

The just-released Fall 2016 issue of Teaching Tolerance goes even further, dedicating most of its pages to the presidential election — which, as the magazine points out, is wreaking havoc in classrooms and on playgrounds throughout the United States.

Not only are teachers having to explain the nasty mudslinging and incredible prejudice coming out in this particular election, but Muslim and Latino children are being taunted by their peers on a regular basis.

“You should get thrown back to Mexico,” said a first-grader to another first-grader in Berkeley, California, otherwise known as a bastion of liberality. “You’re gonna get deported.”

Berkeley being Berkeley, the school where this happened immediately mobilized a district-wide effort to face the bigotry head-on. Headed by teacher Tracey Iglehart, the schools began a campaign to spread one, simple message: “We All Belong in Berkely.” The slogan was printed on posters in English, Spanish and Arabic.

Then schools staged a Teach In, where children in every grade level were taught about immigration and about how every American child — with the exception of Native Americans — had an immigration story to share. Children were encouraged to study their own family’s stories, and teachers talked about refugees and about enslaved people who were forced to leave their homelands. The Teach In had an immediate effect, according to the magazine.

Berkley is such a great model for what I hope schools throughout the country will do if and when they notice Trump’s brand of intolerance being spewed on playgrounds.

“The Teach In did more than unite the children of Berkeley around a common belief,” the magazine said. “It changed the way their teachers view anti-bias education.”

And then past that, we all just need to get out there and vote. Our kids don’t deserve four years of this tool.

To learn more about how to resist derisive rhetoric and encourage your school community to do the same, visit: tolerance.org/civility.

September 30, 2016 Natural Wonderers On Hiatus
Recent Comments
0 | Leave a Comment
"God is real and I had a near death experience through a total heart stop ..."
OurSaviorLives Death is the One Thing that ..."
"Of course, where else are they going to be taught how to say the Lord's ..."
a_b704 Do Kids Really Need an Atheist ..."
"Thanks for sharing.Keep it up Indian Festival Powder"
Florida Freedivers Quick! What the Hell is Holi?
"What statistics do you have that shows the rate is "low"? If we're just guessing ..."
Keith Colter Private: ‘My Classmate Told Me I’m ..."
Browse Our Archives
get the latest from
Nonreligious
Sign up for our newsletter
POPULAR AT PATHEOS Nonreligious
1