Video of the Week: Irish Kids Talking About Religion 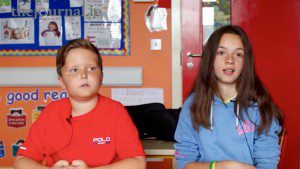 An Irish news site posted a short video yesterday featuring four children talking about what it’s like to learn about religion in school — and there is ample evidence to suggest that it wins the week in videos.

Exhibit A: There are few things more adorable than 11-year-old children speaking in Irish accents. I don’t mean that to be condescending; it’s just fact.

Exhibit B: Two of the kids, classmates from a school in Dublin, are interviewed together and speak like a married couple, finishing each other’s sentences without even looking at each other.

Exhibit C: The video features one non-believer, who is wearing a “Welcome to Miami” T-shirt. And most of you will enjoy his description of what the Catholics and Jews believe — and the little laugh he gives midway through. (Because, bless his heart, he can’t help himself.)

Exhibit D: Donald Trump is neither shown nor mentioned even one time.

The interviews are part of an excellent three-day series by TheJournal.ie, which examines religion’s changing role in Irish schools. As it stands, some 96% of Irish primary schools are run by religious institutions, and enrollment policies are under fire.

August 10, 2016 Science Camp Teaches About God, and It Reminds Me of Insane Clown Posse
Recent Comments
0 | Leave a Comment
"...Columbus was not a heroic discoverer, but an amoral criminal...Don't forget that he was a ..."
Eberhardt von Hessen In 1492, Columbus Did Things One ..."
"An obvious left wing slant on Catholicism by someone who obviously is not Catholic and ..."
jonny 12 Simple Differences Between Catholics and ..."
"Holi Festival is regarded as a spring festival of India that welcomes spring after seeing ..."
Sonampurohit Quick! What the Hell is Holi?
"Good list! I may be slightly biased but you need to add Willow the Wonderer ..."
Reeta Dhar In Lieu of the Bible: 50 ..."
Browse Our Archives
get the latest from
Nonreligious
Sign up for our newsletter
POPULAR AT PATHEOS Nonreligious
1