Honoring a S/hero, Human Decency, and Being the Ones

Honoring a S/hero, Human Decency, and Being the Ones September 21, 2020 J.K. Hildebrand

On Friday evening, a dear brother who is black and gay texted me to let me know Justice Ruth Bader Ginsburg had died. My son and husband were home and I blurted the message out to them. We were all in shock, though clear it really had been only a matter of time.

I have on my altar above my desk a bobblehead style statue of Justice Ginsburg and a pair of socks my son gifted me with over the past couple of years with an image of her on them. She is a s/hero that we both share. We did not hold that what she stood for was liberal or conservative. How we held her ideals was as a principled. A person who stood for human kind, a person of great integrity, a moral compass for the heart of what it is to be an American. Her place on the altar along side of Mother Earth, Buddha, and a medal earned all symbolize these ideals for me.

It is not often I write a regular blog post about my feelings and thoughts. Usually I write about organizational business or fluffier thoughts. For me as a UU Pagan, she was the walking, talking, breathing human form of the tarot card of Justice.

Over the course of the evening, each of us went off to our own spaces to process what was present to sit with, take in and digest about the news. For me, I felt more fear than I probably have for the first time in a couple of years. I realized I had started to become numb from the day to day bombardment of news from our current administration. I cannot listen to the negativity, lies, and craziness all of to time. My own CPTSD and such is better managed not watching or listening to much news.

This news was different though. The hair on the back of my neck stood up. Justice Ginsburg stood for something that was part of my own story. As a woman she fought for equal pay, for our rights. Things I had put up with in the workplace as a woman. She was someone who affirmed that women were their own persons entitled to care for our own bodies, minds and souls. No one owned us.

I also knew she stood for my siblings in the LGBTQTIA+ and BLPOC communities, for religious freedom, and, for our planet. These are not liberal values to me…they are human rights. Simple values and principles that I learned as a young girl in a Presbyterian upbringing in a rural community. These principles did not belong to a particular religious, cultural, or lifestyle tradition. They were just what one stood for so people could live the promise of the pursuit of happiness. I thought our country was moving slowly and profoundly forward in honoring all human beings, not just some.

My father and mother (now deceased) were from the same generation as Ginsburg. They were both proud Republicans back then who only occasionally would vote outside of the party lines. My dad was happy to see her appointment to the Supreme Court. He had finally loosened up on where a woman’s place was. Good thing since he had three daughters!

As things changed in the world and aging occurred some of dad’s and mom’s old ways of thinking changed. Sure they had their own bigotries and prejudices, but through the years they shifted and changed as the world opened to seeing each human being’s value and worth. Ultimately, they believed in what was American…to be open, to look deeper at what democracy meant, and strive to build a better world.

So many thoughts running through my head. I closed my eyes to breath and meditate. Listened to Spirit’s guidance.

Honoring the Dead & What They Stood For

One thing I learned from my folks was to give people the honor and dignity they deserved when they died whether you liked them or not. You granted final dying wishes. Even that simple act is not being given in this case for Justice Ginsburg. It feels disrespectful to her legacy whether you agreed with her actions or not. I find that this really angers me. What has happened to human decency? Imagine someone not honoring your own wishes. Would you feel respected?

I look at this moment in time and I see everything about what I learned from my parents and Justice Ginsburg on the edge of becoming something that is not American. It does not even feel human at times.  I see our civil rights and liberties as individuals—like freedom of speech, the right to gather, freedom of the press, and religion ready to go up in flames. The very framework I learned feels like it is on the brink of extinction. That scares me.

I come from a line of men and women that fought against fascism, communism, and oppressive systems that harmed people. They flew planes over Nazi Germany, they landed in Normandy, fought in Korea, Vietnam, Iraq, and more. They stood for this country’s values during the Civil War against slavery. I am left to wonder, what will happen to our country if another civil war comes to be. Once again fighting an oppressive system that has been under our own noses for decades, the systemic systems of patriarchy, misogyny, and racism. We got numb to it. We put up with it.

WE are the Ones

I know this all may sound alarmist but when one person has held the line on so many ideals and principles for so long, I now see where WE as a people must stand up and uphold what we counted on that one person for. We counted on Justice Ginsburg to be the one to hold that line. WE who will be impacted by the harshness of what is possibly the loss of our rights must stand up and hold the line. Our biggest tool is to vote right now. Standing for democracy is no longer for one person to do. It never should have been. Never should be. Now it is up to all of us.

On average it takes 70 days to confirm a new Justice of the Supreme Court. There are 43 days until our election. They say we are the ones we have been waiting for and frankly we are. Our survival now depends on it, and for me it really does! This is why I chose to write.

Our country, faith communities, and more have already lost so much has lost much to the Covid-19 pandemic, fires in the forests, floods on the Gulf Coast, and other natural disasters. We can no longer depend on our “government” to protect us. So it comes down to the one important thing we must stand by the Preamble of our Constitution:

“WE THE PEOPLE of the United States, in Order to form a more perfect Union, establish Justice, insure domestic Tranquility, provide for the common defence, promote the general Welfare, and secure the Blessings of Liberty to ourselves and our Posterity, do ordain and establish this Constitution for the United States of America.”

– Preamble to the United States Constitution

I hear folks talk about grieving right now. Grieving is not only about sitting around crying and emoting. Grieving right now is a fuel for us to be keepers of the scales and sword of Justice. If they drop to the ground are we going to pick them up and move forward or let them sit to rot and rust?

Justice Ginsburg knew she would die. She did not sit around waiting for death to knock at her door. She fought and worked to stay in the fight. Her calling was much bigger than death and she was the embodiment of that calling.

Her passing on the holy day of Rosh Hashanah makes her a person of great righteousness. For me as a Pagan, I would say she went immediately from her human form to a light form of great power. I can almost picture in a super hero archetype her spirit leaving her body and swirling around as it left like a huge rocket of light that got bigger and bigger as it went into the Universe again. Her super hero power of truth and justice for all shining and sprinkling like stardust over all who stand there too across the country. That stardust igniting a resolve to stand for our country in every one willing to wake up and act.

Moving Between Fall Equinox and Samhain

Now in the world of the Ancestors, her story holds a greater power to inspire others. Historians will write about her and keep her story alive. As we move into the time between the Fall Equinox and Samhain, I am always present to death in a more profound way. Even more so as I age. My statue on the altar will soon be surrounded by pictures of those in my life who taught me my values. Photos of my parents, teachers, friends, colleagues and others who have given me inspiration over the years. I will add an image of Justice Ginsburg in her “Dissent” collar.

This will be to the time to take stock of my own life and to look further at what I need to wake up to, and where have I been asleep. What do I need to let go of that is not helpful in this journey of mine at this time in history? I invite you to do the same.

How will you be inspired during this time? Who are you waiting for? Are you willing to be the one?

We are the ones we have been waiting for. It is clear and simple.

September 16, 2020
Ritual: Perfection, We All Strive For It, But Should We?
Next Post

September 22, 2020 We Are Warriors for Mother Earth
Recent Comments
0 | Leave a Comment
Browse Our Archives
get the latest from
Nature's Sacred Journey
Sign up for our newsletter
POPULAR AT PATHEOS Pagan
1 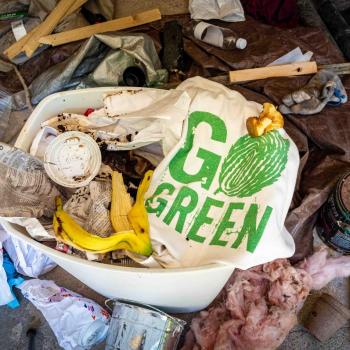