My fellow Patheos blogger Peter Mosley has a post up purporting to show evidence that firebrand atheism works. He writes:

People may be vocal about rude, negative arguments, but the fact is that, like it or not, they can be quite effective in several situations.

Mosley’s primary source of evidence for this claim comes from the results of studies on political campaign ads. Throughout his post, Mosley concedes that drawing a clear conclusion from this comparison is complicated—but I think it’s more complicated than he realizes, and much too complicated to have any confidence in the conclusion that negative, rude attacks on religion are effective. Before I cite some counter-evidence to Mosley’s claim, let me talk a little about the comparison of political campaign ads to attacks on religion itself.

More questions that needs answering are:

How invested are potential voters in the race? How well do they know the issues? Do political attack ads work on those voters who are invested and very knowledgeable about both the candidate and the issues involved?

Do voters change their core commitments based on those ads? In other words, does a conservative become a liberal? Isn’t it more likely that a liberal politician who attacks another liberal will have more sway over a liberal voter than a conservative who attacks a liberal? In other words, is there evidence that a self-described conservative voter voted for Obama over McCain in 2008 based on attacks on McCain from Obama or other Democrats? Isn’t it more likely that a self-described conservative would change their vote from someone like Romney to someone like McCain, based on attacks ads from the McCain camp?

Political scientist Dana Mutz had this to say in 2012:

There’s very little evidence that ads make much of a difference in a presidential campaign. Most people are shocked when they learn about what the likely effects are relative to the huge amount of campaign resources that gets poured into advertising…It’s shockingly small bang for the buck when it comes down to it.

Though Mutz doesn’t cite her sources, we can look to a comprehensive literature analysis published in 2007 in the Journal of Politics:

The conventional wisdom about negative political campaigning holds that it works, i.e., it has the consequences its practitioners intend. Many observers also fear that negative campaigning has unintended but detrimental effects on the political system itself. An earlier meta-analytic assessment of the relevant literature found no reliable evidence for these claims, but since then the research literature has more than doubled in size and has greatly improved in quality. We reexamine this literature and find that the major conclusions from the earlier meta-analysis still hold. All told, the research literature does not bear out the idea that negative campaigning is an effective means of winning votes, even though it tends to be more memorable and stimulate knowledge about the campaign. Nor is there any reliable evidence that negative campaigning depresses voter turnout, though it does slightly lower feelings of political efficacy, trust in government, and possibly overall public mood.

Given the lack of conclusiveness on whether or not political attack ads even work, as well as the tenuous comparison between indirect attacks on political candidates in the heat of an election cycle and more direct attacks on people’s religious beliefs, I think it’s much too soon to draw the conclusion that “negative, rude attacks” on religion are effective.

But there’s one more thing in Mosley’s post that I’d like to address—his claim that being perceived as “dominant” is a good thing for atheists to be. Here are the relevant references from Mosley’s post:

…if you want to be perceived as dominant, it helps (with, as we will see, several caveats) to NOT conform to social norms…if you know the norms and confidently violate them, you can be seen as a more dominant individual…being seen as dominant will create you enemies even as it will emanate influence, and some people, of course, do not want enemies or to deal with the headache in general…being rude in the preceding way can make people perceive you as dominant, but it can also make you hated, which can diminish your influence…

I’m not sure in what way Mosley is using the word “dominant.” If by “dominant” he means “numerous,” then I don’t think it’s problematic—he means to say he wishes there were more atheists as opposed to religious believers. But if he means “commanding, controlling, or prevailing over all others,” then I see that quest as being counterproductive to his stated goals.

Mosley citation from a study that says “norm violations only inspire power affordance when they benefit rather than harm other people” seems to indicate he means the latter, which relates to dominance hierarchies in social animals like us humans. I think it’s uncontroversial to say that humans, and maybe especially Americans, chafe at those who assert their dominance over us. We atheists chafe at the dominance of Christianity in America—we don’t want to be dominated by the religious pronouncements of our politicians, judges, pop stars or athletes, much less having God in our pledge and on all of our money. And we know by the reaction of religious conservatives that they don’t want to be “dominated” by an atheist or secular society.

Mosley brings up the point that humans are OK with affording some others dominance over the rest of us if they use their power for benefit rather than harm. Mosley attempts to claim that atheists are in fact working for the benefit of society in their quest for this type of dominance. Mosley writes:

If you are rude regarding religion and at the same time seen as trying to make things better for people, as being unselfish, you are likely to make much more progress.  And you see this in the “new atheists” frequently, which is why they are often seen as being so effective (Hitchens seemed to sanctify his sense of morality more than his life, Dawkins seems dedicated to protecting science education, and Sam Harris — although he has come under fire — also seems fairly externally focused).

I’m not sure how Hitchens sanctifying “his sense of morality more than his life” creates the perception that he’s making things better for others. But even by referencing Dawkins and Harris, I think he’s not doing himself any favors. Even if religious believers value science as much as Mosley seems to think, I guarantee you they reject everything else about Dawkins’s—maybe especially his delivery. Dawkins is a hot potato best dropped. And Harris is equally problematic, especially with his stoking of Islamophobia and his adamant refusal to consider the possibility that atheism is subject to the same dangers as other types of tribalism.

I think the type of benefit that is meant by the study Mosley references is closer what Jonathan Haidt cites in his book The Righteous Mind:

Even among chimpanzees, where dominance hierarchies are indeed about raw power and the ability to inflict violence, the alpha male performs some socially beneficial functions…resolving some disputes and suppress[ing] much fo the violent conflict that erupts when there is not clear alpha male.

I would submit that if atheists are seen as working for social justice in a pluralistic society, as we’re trying to do, then that will be seen as more of an egalitarian benefit than atheists working for the eradication of religious belief. I don’t think it’s a stretch to say that religious believers don’t view anti-theists as benefiting society.

In sum, not only do I think that “negative, rude attacks” on religion are counterproductive, I don’t think Mosley can conclude that they do work by appealing to the effects of negative political ads—the evidence for which is inconclusive at best.

March 25, 2015
A Response to Peter Mosley's Critique of My Salon Article
Next Post 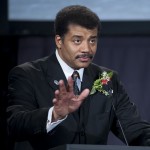 April 5, 2015 What Neil deGrasse Tyson's Defense of Religion Gets Wrong
Recent Comments
0 | Leave a Comment
Browse Our Archives
Follow Us!