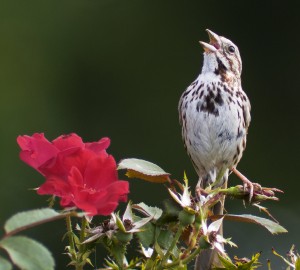 When I was little I would spend hours watching birds in fields and forests, near ponds and lakes, or down the shore. When I wasn’t outside observing them, I was inside drawing and painting them, or caught up in some reverie about them. Throughout my childhood, I had my share of parakeets, one Senegal parrot, and a dozen racing pigeons. One time I even tried to temporarily trap some songbirds in my parent’s garage, using parakeet feed as a lure, just to get a closer look at them. When I was quarantined one spring with mononucleosis, my parents bought me a recording of bird songs and I spent my lonely, boring days memorizing their calls. When I was finally allowed outside again, I found I appreciated birds in a deeper way.

I’m 43 years old now, and it occurred to me recently that I have been failing to appreciate the songbird symphony going on all around me, every day. The main instruments in this orchestra are the Northern Cardinal, the Gray Catbird, the American Robin, the Eastern Bluebird, the American Goldfinch, the House Finch, and assorted sparrows — Song, White-throated, and Chipping being the most numerous. But last night I was given a stark reminder of the Maestro of them all — the Northern Mockingbird. At 2:38 A.M., he woke me up with an impromptu recital. This morning I remembered a poem by my favorite poet Denise Levertov where she referred to the mockingbird as a

lord of a thousand songs,

He may indeed be all those things, but last night I woke up in a foul mood, fantasizing about a BB gun fitted with a night-vision scope. Though I didn’t get out of bed, I’m sure he was sounding off from his daytime rostrum — the telephone pole just outside my house. His repertoire was insistent and piercing, since there were no other sounds at that hour except the occasional pathetic whimpering of my dreaming German Shepherd dog at the foot of my bed.

I realized that the exact same thing happened last year at this time. Before that, I had never heard birdsong in the middle of the night. They’re all supposed to be roosting, aren’t they? Sure, I would hear an occasional Great-horned owl if I already happened to be awake, but never a songbird. Is he that much of a narcissist that he has to wait until everyone is asleep so he can have the stage all to himself? Or is it that he’s so dissatisfied with the rest of the orchestra that he has to show ‘em how it’s really done? Is he just being a jerk, then? In that regard, he reminds me of the conductor Terence Fletcher (masterfully played by J.K. Simmons) in the movie Whiplash.

There’s a scene in that movie where the protagonist is trying out to be the lead drummer in the jazz orchestra, and Fletcher keeps rudely interrupting him and telling him that his timing is too fast, then too slow, then too fast, and so on, until finally Fletcher is so fed up with his alleged drumming prodigy that he hurls his chair at him. My neighborhood Mockingbird doesn’t resort to such violence, fortunately. He didn’t pick any fights or single out any one instrument for derision. He went through his whole repertory — an equal opportunity rebuker and one-upper.

But perhaps I’m being too hard on my passerine friend. Maybe now that I’m middle-aged I’m letting my middle-of-the-night groggy grumpiness turn me into just another curmudgeon who can’t enjoy life. I genuinely admire the mockingbird’s talent and panache, as well as his fearlessness in fending off the local Red-tailed and Cooper’s hawks, both of which are much bigger than he, and have more formidable weapons at their disposal. But this stage of life really does seem to present the stereotypical dilemma of the mid-life crisis. Now that my life is half over, what should I do with the rest of it? Am I doing everything I can to live life to the fullest before my time is up?

It also happens that for exactly a year now I’ve been self-employed as a freelance writer. I had spent the previous 11 years as a guide dog mobility instructor for The Seeing Eye, training dogs and teaching visually-impaired humans how to use and care for them. It was a tremendously satisfying career. I’ve also had a twenty-year love affair with writing, and during my last few years of employment with The Seeing Eye, the desire to be a writer became more pressing — I could hear the clock of mortality ticking for the first time. Fortunately, a convergence of events last year allowed me to pursue my new career. I was able to take the leap, determined to make my mark. I comforted myself with the thought that even if I didn’t succeed as much as I was planning to, at least I would be able to say I followed my passion.

It hasn’t been easy. In addition to the frequent bouts of self-doubt any writer has, there are the many practical challenges of making sense of the writer’s guidelines for diverse publications, learning the tastes and communication preferences of editors, remembering to send invoices and, of course, following up with accounting departments to make sure I get paid in a timely manner. Most significantly, for the first time in my adult life everything truly depends on my own efforts. If I wake up one morning and don’t feel like writing, or feel uninspired, I don’t get paid. There are no co-workers to pick up the slack. I frequently find myself repeating the refrain from a song by one of my favorite Hip-Hop artists from the 90s, The Pharcyde: gotta hustle, y’all, gotta hustle. (Lyrics are definitely NSFW, by the way.)

I’ve learned that for a self-employed writer, time really is money, so I’m actually working more than I ever did. I am always working now. I made sure to keep a regular daily routine like the structured work-day I had at The Seeing Eye — I still work for about 3.5 hours straight in the morning at my “office” (I.e., Starbucks), break for lunch at home, and then go back to my “office” for the rest of the afternoon. But ever since time became money for me, I’ve been slacking in the exercise department. In my previous job, I was walking an average of 12 miles a day, five days a week. I used to joke that I was paid to exercise. For awhile now I’ve felt that taking the time to workout would be a waste of time, time that could be spent on revising a draft or devising a hot take on a new topic.

Even when I’m relaxing by binge-watching something on Netflix, I’m always on my iPhone, either using my Google Drive app to make some quick edits to a piece-in-progress, or emailing myself links of useful research to use for the next piece. But I eventually managed to convince myself that I needed to do something for my health, especially after being diagnosed with high blood pressure last year — so I decided to spend 30 minutes each day walking.

Meanwhile, amidst the endless hustle of making ends meet, the songbird symphony continues, and it was the renditions of my nocturnal singer that woke me up to it again. Rereading Levertov’s poem this morning reminded me of her essay where she quotes the famous philologist Walter Friedrich Otto: “Wherever a creature emits even the simplest sequence of musical tones, it evinces a state of mind different from that which occurs in the uncontrolled outcry.” Birdsong is just that, a melodious song — whereas the squeals and screeches that the members of my neighborhood orchestra vocalize when a sparrowhawk is on the hunt are jarring, evoking a sense of urgency, of terror. The word “scrambling” comes to mind. I know how that feels.

“It is often unmistakable,” continues Otto, “that the song, even of animals, is sufficient unto itself, that it is not intended to serve any purpose or produce any sort of effect.” Maybe my midnight Maestro wasn’t being a pompous jerk, maybe he was just exulting in his own vitality, expressing his own being.  And maybe instead of an inconvenient nuisance, I can consider him to be a new kind of alarm clock for me. Even with the sense of urgency that the awareness of mortality and an empty bank account brings, constant scrambling can be the death of you. And if you’re not actually dead, then you’re dead to the treasures the world has to offer, which is almost as bad.

My daily walk now serves two purposes. It’s an exercise regimen that’s easy on my aging body, and it’s also a restorative that gives me a renewed gratitude for the songbird symphony, which has also expanded. Now that I walk by less populated areas, I get to hear some of the more unusual instruments — the Red-winged Blackbird, the Brown-headed Cowbird, the Baltimore Oriole, and even the elusive Wood Thrush. I can now kill two birds with one stone, so to speak. Of course, I would never kill a bird, not even my impertinent, nighttime mocking friend. 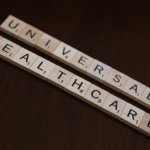 April 28, 2015
Why Religious Conservatives Should Support Universal Healthcare
Next Post 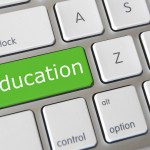 May 14, 2015 Philosophy for Children And Public Education
Recent Comments
0 | Leave a Comment
Browse Our Archives
Follow Us! 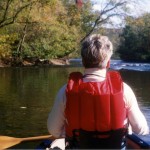 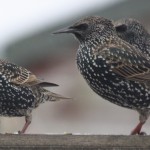 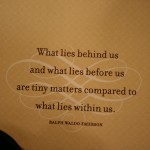