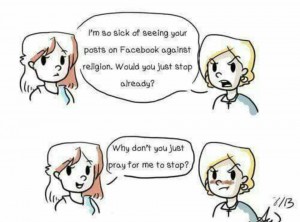 By now, there likely isn’t anyone who isn’t familiar with the new and entirely fictional notion of #prayershaming (of course there is a hashtag). As many good writers here at the Patheos Atheist Channel have already pointed out, this is yet another example of the privileged majority appropriating certain words, turns of phrase, and situations to bolster their own delusions of victimhood.

For those new to the controversy, some Christians have complained that persons who rightfully point out that prayers are not actions are engaging in “prayershaming”. The original context of the commentary was to criticize those politicians who offer “thoughts and prayers” rather than any meaningful actions to prevent horrors such as those that occurred in San Bernardino, CA. The commentary was generally not directed at ordinary individuals who pray. However, facts don’t mean anything when there is a chance to spin this into their personal (and false) Christian victim narrative.

Other examples include but are not limited to the following:

The War on Christmas. This is the annual holiday season event in which Christians assert that any attempt to treat public property as if it belongs to the public, not exclusively to them, it an anti-Christian attack. Closely related to this phenomena is the concept that removing Christian symbols from public property is an attempt “to remove Christianity” from public view because Christians don’t believe their millions of acres of church and private property on which to display these things is enough.

Gay marriage. According to Christians, allowing gay Americans the same civil legal privileges afforded to straight Americans, even though such unions don’t directly affect any individual Christian in any way whatsoever, is an attack on Christianity and Christians.

Equal opportunity laws. Attempts to hold Christian owned business to the legal standard of ensuring they deliver their product or service without discrimination, which is the same standard every other business is held to, is an attack in Christianity and Christians.

Birth control. Family planning allows women to have sex for pleasure (gasp!) and must be stopped because women going about private sexual activities without the risk of pregnancy is an attack on Christianity and Christians.

Abortion. A private medical decision between a woman and her doctor is an attack on Christianity and Christians. I can’t help but to notice that Christians don’t seem to care about the lives and health of women and children who are already born, though.

The bottom line is that Christians invented #prayershaming as a way to silence critics while reinforcing their fake victim narrative. For that they SHOULD be ashamed. 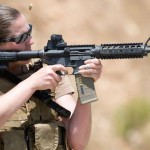 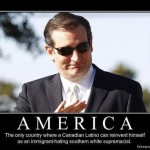 December 8, 2015 Senator Cruz and the Lying Liars Club
Recent Comments
0 | Leave a Comment
"recently ol' Luke tried the "indentured servitude & not at all like the slavery of ..."
al kimeea “Is the Atheist My Neighbor?”: A ..."
"he's still at it"
al kimeea “Is the Atheist My Neighbor?”: A ..."
"As a general requirement? As a specific requirement?Nobody should be able to get a degree ..."
HematitePersuasion The Psychology of Religious Nonsense
"I am a long time scientist with an extreme IQ. I asked a question in ..."
GoodScienceFYou Religion and the Constitution: The Official ..."
Browse Our Archives
get the latest from
Nonreligious
Sign up for our newsletter
POPULAR AT PATHEOS Nonreligious
1