Religion and the Constitution: The Official Record (Part 1) 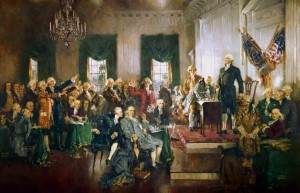 You’ve probably seen it. Anyone who has spent time perusing the comment sections of online articles has seen the verbal sparring matches between secularists and theocrats. Typically, the theocrat is left battered and bruised by the weight of history and facts, and yet, the theocrat still somehow leaves unconvinced…
…and claiming victory. (smh)

If one takes the time to engage a theocrat with a concerted campaign of refutation, eventually, they will get into ambiguous territory like what was the “Real” intent of the founders. It was after a series of such discussions that I decided to do some research of my own into the official record.
WARNING: The following is low on opinion and high on the official record…
with links galore…

Most Americans (I hope) know that there are three religious clauses in the Constitution, the ‘no religious test’ clause, and the ‘establishment’ and ‘free exercise’ clauses that comprise the First Amendment. Before we dive right in to investigate the ‘no religious test’ clause born of the Constitutional Convention, enjoy this exchange between Thomas Jefferson and John Adams (two founders absent from the convention due to their ministerial duties abroad):

“Do you know that there exists in MS. the ablest work of this kind ever yet executed, of the debates of the Constitutional Convention of Philadelphia in 1788? The whole of everything said and done there was taken down by Mr. Madison, with a labor and exactness beyond comprehension.”
Thomas Jefferson, letter to John Adams, 10 August 1815

“Mr. Madison’s Notes of the Convention of 1787 or 1788 are consistent with his indefatigable Character. I shall never see them: but I hope Posterity will.”
John Adams, letter to Thomas Jefferson, 24 August 1815

James Madison’s notes, first published in 1840, are the most comprehensive record that we have of the Constitutional Convention.

August 6, 1787, after two months of debate, the report from the Committee of Detail delivers to the convention the first draft of the Constitution containing 23 articles, one of which is Article XX and it reads:

“The members of the Legislatures, and the Executive and Judicial officers of the United States, and of the several States, shall be bound by oath to support this Constitution.”

August 20, Mr. Charles Pinckney submits 12 proposals to the convention, included is the ‘no religious test’ clause, the proposals are referred to the Committee of Detail and doesn’t come back around until the 30th.

August 30, Article XX was then taken up. The words “or affirmation,” were added, after “oath.” The following is directly from the text:

Mr. Pinckney moved to add to the article: “but no religious test shall ever be required as a qualification to any office or public trust under the authority of the United States.”

Mr. Sherman thought it unnecessary, the prevailing liberality being a sufficient security against such tests.

Mr. Gouverneur Morris and General Pinckney approved the motion.
The motion was agreed to, nem:con:, and then the whole article,
N.C. only no-& Md. divided

(nem:con: = Nemine contradicente, with no one dissenting; unanimously)

That’s it! Seriously! That was the extent of the discussion regarding the ‘no religious test’ clause, and not even a single delegate voted against it.
(“…the prevailing liberality…” )

Next up Part 2: The Bill of Rights in the House.

Steve is an American veteran who views those that support the usurpation of our secular nation in order to pervert it into their preferred theocracy as “domestic enemies” that must be vanquished, nonviolently, through the use of history, facts, and reason. 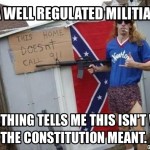 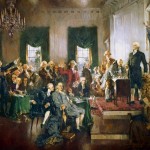 Come Meet the Growing Ranks of...
Roll to Disbelieve
Related posts from NoGodBlog