Believing Versus Knowing Jesus (And Both Are Wrong)

Speaking FRANK-ly About Jesus: Critique of alleged evidence of the historicity of  Jesus of Nazareth.

(Ed. Note: This is the 15th post in Frank Zindler’s Speaking Frankly About Jesus blog which is dedicated to the thesis that Jesus of Nazareth never existed. This is part G of a mini series debunking “The Myth of the Mythical Jesus“.)

Philip Jenkins tells us that “The writings of Paul can reliably be dated to the year [sic], say, between 48 and 64 AD,” and then he goes on to tell us:

“If we take the letters most credibly attributed to Paul (Romans, 1 and 2 Corinthians, Galatians, 1 and 2 Thessalonians), they include around 130 uses of the term “Jesus Christ” or “Christ Jesus.” [No curiosity leading Jenkins to understand the puzzling reversal in sequence of the titles—a very important mystery indeed, as it will turn out] If we take other letters like Colossians and Ephesians, the number rises sizably. As that usage makes it obvious that the term “Christ” refers to the same person, then we should add the many examples of that word used without the “Jesus.” We can argue about Paul’s understanding of the importance of the human Jesus, as opposed to the resurrected Christ, but he clearly believed in the physical existence of that Jesus. That does not take us to Jesus’s lifetime, but to very shortly afterwards.”

Whoa, Nellie! Jenkins is telling us that from the beginning “Christ” and “Jesus” are equivalent—synonyms—so that whatever “Paul” is telling us of Christ, he also is telling us about Jesus. (He clearly is assuming that “Jesus” is a personal name, not a title.) This is, of course, a core—indeed, fundamental—dogma of Christian belief. This has to be true if Orthodox Christianity is to survive. But believing isn’t knowing; and Jenkins must realize he has to try to prove this article of faith.

To start with, even if it could be shown that in the Pauline letters Christ = Jesus, it would only attest to the fact that that was true of the particular evolutionary stage primitive Christianity had reached at the time of writing. Indeed, if it were true, it would argue for a later dating of the epistles. (It appears that both “Christ” and “Jesus” were originally titles, titles that later came to be thought of as personal names—leading to Mary and Joseph coming to be unconsciously thought of as Mr. and Mrs. Christ, as the joke tellingly suggests.)

Before going further in this discussion, I must digress to tell about my own research project as it relates to the Christ/Jesus equivalence. Since 2008, when I was a member of the Jesus Project (a successor to the Jesus Seminar in which I earlier had been involved), I have explored the thesis that Christianity began not with a founding figure specifically locatable in space and time, but rather it began in the way the ancient Egyptian, Greek and Roman religions, or Hinduism had “begun.” The history of Christianity, then, is not to be diagrammed as a tree with its taproot in a single, original tradition that then branched into conflicting and competing branches and sub-branches. Rather, it evolved as a braid made of threads of traditions—some threads tracing arbitrarily back into the mists of prehistory, some threads being spun up and incorporated into the braid at known periods, some threads splitting or leaving the braid at various times, some changing their “color” as time went by, and so forth.

As soon as we have records relating to Christianity, we have evidence not of a pristine, unified church as is fantasized in Acts of the Apostles, but rather we find a variety of different Christianities—“Lost Christianities” as Bart Ehrman so aptly has termed them.

Many Mythicists argue that a major early component of the braid that would become Christianity was a Heavenly Christ cult. (In Bart Ehrman and the Quest of the Historical Jesus of Nazareth, in my chapter “Bart Ehrman and the Crucified Messiah” I presented research to show that the Greek word for Christ (Christos) originally was spelled Chreistos or Chrēstos and was not the equivalent of the Hebrew Meshiach and did not mean “anointed.” The early Christ Cult, then, would have had no obvious relation to Israelite religions “in the beginning.” Later, after the great Greek vowel shift known as itacism or iotacism had taken place, Chreistos had become Christos (anointed) and could carry messianic meaning. At that time, the Christ tradition could become intertwined with Jewish messianic threads of tradition. (The voluminous data supporting these claims can be found in the above-cited “Bart Book,” which is still available on Amazon.)

It is likely that “Jesus” (Iēsous in Greek) derives from Jewish sources. It is usually given an Aramaic or Hebrew etymology and signifies “savior.” It originally was a title, not a personal name. The name is often incorrectly (in my opinion) etymologized to the Hebrew name Joshua. The name Iēsous was a “name of power” and was widely employed by both Christian and pagan magicians, as is attested by many ancient magical papyri. Proof that “Christ” and “Jesus” were not linked together from the beginning can be found in the so-called “Kenosis Hymn” in the deutero-Pauline text Philippians 2:5-11:

“Phil 2:5. Have this mind in you, which was also in Christ Jesus: 6 who, existing in the form of God, counted not the being on an equality with God a thing to be grasped, 7 but emptied himself, taking the form of a servant, being made in the likeness of men; 8 and being found in fashion as a man, he humbled himself, becoming obedient even unto death, yea, the death of the cross. 9 Wherefore also God highly exalted him, and gave unto him the name which is above every name; 10 that in the name of Jesus every knee should bow, of things in heaven, and things on earth and things under the earth, 11 and that every tongue should confess that Jesus Christ is Lord, to the glory of God the Father.” [1901 ASV translation]

It is interesting that although the author of the letter begins the hymn with the sequence Christ-Jesus, he ends with Jesus-Christ. Is this a slipup of someone trying to imitate primitive usage and then slipping into a more modern use of Jesus Christ as a personal first and second name, rather than a sequence of two titles? I’m looking into that.

We note also in this hymn, that “Christ” receives the name “Jesus” after his “death of the cross.” Very curious! We note also that Jesus is a name of power—something suitable for use in all magical procedures, including petitionary prayers ending with “In Jesus’ name, we pray. Amen.”

From time to time for several years now, I have been compiling an exhaustive database of the use of the divine names Christ, Jesus, Lord, Lamb, Savior, etc. in all the canonical books, the Apostolic Fathers, the early Ante-Nicene Fathers, and the most important New Testament Apocrypha. From this I hope to be able to reveal the various threads of tradition that came together to form the various ancient forms of Christianity. I hope to discover the chronology of such amalgamations and to trace the religious trajectories that formed the “orthodox” and “heretical” forms of ancient Christianity.

To return to Jenkins: The Pauline epistles are very complex in their compositional history, and it is likely that they began as proto-Gnostic documents but then were “Catholicized” in various degrees. The Greek text—which often is ridiculously awkward to translate due to repeated interpolations and other forms of textual corruption—is notable for the number of ordinary Greek words that also are technical terms in Gnosticism. Jenkins, however, retrojects the modern Christian equivalence of Christ, Jesus, Lord, Savior, etc. into formative Christianities. That clearly is not justified by the facts of higher criticism.

Finally, when Jenkins claims that Paul “clearly believed in the physical existence of that Jesus,” he is making a claim for which he has given no evidence. The Pauline Christ Jesus is insubstantial—“being made in the likeness of men [Phil 2:7] and being found in the fashion as a man [Phil 2:8]. A Gnostic or other Docetic heretic couldn’t have said it more plainly. That Paul’s Jesus was insubstantial should not surprise us. After all, the story goes that he only “met” Jesus once—in the form of a phantom being.

Next time we shall examine Jenkins’ claim that “The gospels were not of course written during Jesus’s lifetime, but they use traditions that clearly do provide a direct linkage to a historical individual. 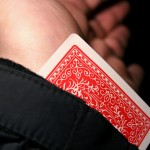 August 5, 2016 Gospel Fiction and Magical Nonsense
Recent Comments
0 | Leave a Comment
"recently ol' Luke tried the "indentured servitude & not at all like the slavery of ..."
al kimeea “Is the Atheist My Neighbor?”: A ..."
"he's still at it"
al kimeea “Is the Atheist My Neighbor?”: A ..."
"As a general requirement? As a specific requirement?Nobody should be able to get a degree ..."
HematitePersuasion The Psychology of Religious Nonsense
"This is odd... an atheist speaking about Princess Leia, as if she was real or ..."
roberto quintas Disrespecting Princess Leia
Browse Our Archives
Follow Us!