The Castrating Knife of Christian Censorship

(Ed. Note: This is the 19th post in Frank Zindler’s Speaking Frankly About Jesus blog which is dedicated to the thesis that Jesus of Nazareth never existed. This is part K of a mini series debunking “The Myth of the Mythical Jesus“.)

Following up on Philip Jenkins’ blog “The Myth of the Mythical Jesus,” we move from a discussion of his treatment of the philosophical problem of what information might have been contained in a newspaper that never existed to a much more rewarding line of investigation: “Just why,” Jenkins writes, “would anyone refer to Jesus in writing at this time?” I fear that most speculation on this question would most likely involve the ignotum per ignotius fallacy, and so I am taking the liberty of reprinting the Enlightenment historian Edward Gibbon’s treatment of this problem. Edward Gibbon, at the end of the notorious Chapter XV of Vol. I of his Decline and Fall of the Roman Empire (one of the two chapters chopped out in all the standard Christian abridgments of that six-volume work) gave an ironic answer to Jenkins’ rhetorical question, an answer that never shall be equaled—certainly not by anyone without far greater talents than mine.

“But how,” Gibbon wrote, “shall we excuse the supine inattention of the Pagan and philosophic world to those evidences which were presented by the hand of Omnipotence, not to their reason, but to their senses?”

In his peroration, we can almost hear him lamenting sardonically to Mr. Jenkins:

“During the age of Christ, of his apostles, and of their first disciples, the doctrine which they preached was confirmed by innumerable prodigies. The lame walked, the blind saw, the sick were healed, the dead were raised, daemons were expelled, and the laws of Nature were frequently suspended for the benefit of the church. But the sages of Greece and Rome turned aside from the awful spectacle, and, pursuing the ordinary occupations of life and study, appeared unconscious of any alterations in the moral or physical government of the world. Under the reign of Tiberius, the whole earth, or at least a celebrated province of the Roman empire, was involved in a preternatural darkness of three hours. Even this miraculous event, which ought to have excited the wonder, the curiosity, and the devotion of mankind, passed without notice in an age of science and history. It happened during the lifetime of Seneca [Because of the similarity between some Pauline ideas and those of the Stoic philosopher, the forged “Correspondence of Paul with Seneca” was an early Christian attempt to show that Paul had taught Seneca his philosophy!] and the elder Pliny, who must have experienced the immediate effects, or received the earliest intelligence, of the prodigy. Each of these philosophers, in a laborious work, has recorded all the great phenomena of Nature, earthquakes, meteors, comets, and eclipses, which his indefatigable curiosity could collect. Both the one and the other have omitted to mention the greatest phenomenon to which the mortal eye has been witness since the creation of the globe. A distinct chapter of Pliny is designed for eclipses of an extraordinary nature and unusual duration; but he contents himself with describing the singular defect of light which followed the murder of Caesar, when, during the greatest part of a year, the orb of the sun appeared pale and without splendor. This season of obscurity, which cannot surely be compared with the preternatural darkness of the Passion, had been already celebrated by most of the poets and historians of that memorable age.”

Not wishing to risk having too much of my own prose be compared too immediately with that of the illustrious Mr. Gibbon, I shall let this be the shortest of my replies to the second-order Mythicist Mr. Jenkins. I shall only recall for my readers the fact that Madalyn Murray O’Hair, the founder of American Atheists, Inc.—the woman LIFE magazine dubbed “The Most Hated Woman In America” after her 1963 Supreme Court victory over forced prayer and bible reading in the public schools—loved Gibbon’s writing and impeccable scholarship. She could often quote from memory whole paragraphs from the verboten chapters XV and XVI of Decline and Fall. Thanks to her, I learned that the version of Gibbon I had read in high school had been horribly mutilated by the castrating knife of Christian censorship. Thanks to Madalyn, I have been able to let Gibbon work for me in this posting.

Next time: I shall make good on my previous promise to examine Jenkins’ treatment of the “fatuous objection” that Philo of Alexandria does not refer to Jesus even though his life completely would have overlapped that of Jesus had he existed. 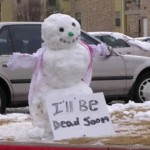 August 29, 2016 Jesus Versus Mithra
Recent Comments
0 | Leave a Comment
"recently ol' Luke tried the "indentured servitude & not at all like the slavery of ..."
al kimeea “Is the Atheist My Neighbor?”: A ..."
"he's still at it"
al kimeea “Is the Atheist My Neighbor?”: A ..."
"As a general requirement? As a specific requirement?Nobody should be able to get a degree ..."
HematitePersuasion The Psychology of Religious Nonsense
"This is odd... an atheist speaking about Princess Leia, as if she was real or ..."
roberto quintas Disrespecting Princess Leia
Browse Our Archives
get the latest from
Nonreligious
Sign up for our newsletter
POPULAR AT PATHEOS Nonreligious
1