The Killing of Democracy 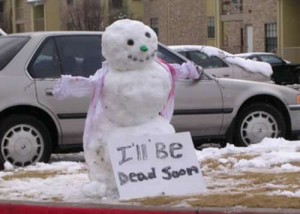 (Editor’s comments:  The views expressed in this or any other post are those of the author and not of any particular organization.)

How to kill a Country’s Democracy without the Country knowing it has died.

The greatest crimes are the ones committed without anyone ever realizing a crime has been committed. Examples of this are the thief who can embezzle money without being caught because he can cook the books to make the numbers look as if they came out even. Or, the murderer who can make the scene look as if it was an accident or a suicide.

Similarly, the best way to kill a democracy is to do it without the country ever realizing its democracy has died. What follows are the general guidelines for how to do this.

History has warned that democracy is usually its own worst enemy.

The death of democracy is not likely to be an assassination from ambush. It will be a slow extinction from apathy, indifference, and undernourishment.

Democracy never lasts long. It soon wastes, exhausts, and murders itself. There is never a democracy that did not commit suicide.

As a nation of free men we will live forever or die by suicide.

It is crucial that history’s warnings are hidden from the people.

The second tactic is to convince the country that in order to defeat the threats to its democracy the people must temporarily sacrifice a little bit of liberty to protect the rest of the democracy. If need be, raise the threat level above what it truly garners in order to scare the people into willingly giving up a small portion of freedom. Wars and economic depressions, or the threat of a war or depression, are good times to do this.

Then, once the people have given up that small amount of freedom, you have to change “temporary” to “permanent.” You have to convince the country that if that little bit of freedom that was taken away was given back the crisis would come back.

Do this with every threat the nation faces. Eventually, over the course of decades and centuries, those inches of democracy that are sacrificed will add up to a mile of democracy. Few, if any, will notice an inch at a time.

Again, history has unfortunately given warnings against principle two.

It is a universal truth that the loss of liberty at home is to be charged to the provisions against danger, real or pretended from abroad.

No government ever voluntarily reduces itself in size. Government programs, once launched, never disappear. Actually, a government bureau is the nearest thing to eternal life we’ll ever see on this earth.

As always, it is vital that you hide history’s warnings from the people.

In order to kill a country’s democracy without that country realizing it has died you must continuously weaken the standard of what it means to be an “informed citizen.”

When a country first becomes a democracy it is okay to encourage citizens to have a comprehensive understanding of policy issues. But, as the government becomes more complex, it is necessary to convince the people that there are far too many issues for them to take the time to have an in-depth understanding of them all. Instead, the standard you have to meet to be considered an “informed citizen” is to read summaries on issues.

Next, subtly convince the majority of people that reading summaries on every issue would take too long. Then, convince the people that relying only on sound bites about each issue and the candidates will qualify a person as an “informed citizen.” The next phase would be to foster a culture in which having an opinion is all that is necessary to be considered “informed.” In all things, continue making citizens think they are informed while informing them less and less.

It is okay if some people believe that freedom means “free to be dumb.” But you don’t want too many people to believe that it is okay to be ignorant about political issues because the ultimate goal is for people to be unaware of their ignorance. Benjamin Franklin wrote, “The doorstep to the temple of wisdom is a knowledge of our own ignorance.” You must keep the majority of a democracy’s people from ever approaching that doorstep. They must remain ignorant of their ignorance. This will also cause the citizenry to become more apathetic, which is just as good as ignorance as far as killing a democracy.

Even if the country ranks low in subjects like math, science and government you want the country to still rank at the top in confidence in its knowledge. The Irish playwright, George Bernard Shaw wrote, “Where there is no knowledge, ignorance calls itself knowledge.” That is the goal. In order to kill a country’s democracy without that country realizing it you need the majority of people to mistake their ignorance for competence.

If people become aware of their ignorance, then they might become more open-minded. Open-mindedness might cause them to educate themselves instead of dogmatically standing by whatever a particular political party says.

When the electorate is ignorant then the politicians grow more lax in their knowledge of issues because they realize the people are not informed enough to hold them accountable. This causes the people and the politicians to grow more ignorant together, creating a culture that is ripe for killing a democracy without the country knowing.

Unfortunately, history has again given many warnings concerning how dangerous ignorance is to a democracy.

If a nation expects to be ignorant and free…they want what never was and never will be.

Democracy cannot succeed unless those who express their choice are prepared to choose wisely.

Only a well instructed people can remain permanently a free people.

Again, as always, you must keep the people from becoming aware of history’s warnings.

By doing this, in the future (decades from now or centuries) the country will still think its government is a democracy even though, according to current standards, it would not be. But, at the same time, that government will be a democracy because it will meet that generation’s definition of democracy.

If you use tactic four the right way then you could eventually phase out even the vote and future generations will still call their government a democracy.

If someone becomes aware of the definition of democracy changing and raises objections then you should use the argument that each country should have a democracy that is unique to their culture. And, if the culture changes, then democracy must be slightly altered as well. Unlike the other principles, with this one it is good to use a warning from history.

If you do not change the constitution every thirty years you enslave the next generation.

Misinterpreting this warning should help convince people of the need to continuously “evolve” the government as the culture evolves.

Principle five is that the death of democracy should be slow. You might grow impatient and be tempted to kill a large portion of democracy all at once in order to speed the process, but you must resist. You cannot cut an arm or leg off and expect it to go unnoticed. You must pluck one hair at a time.

Democracy must subtly die inch by inch at the fringes, decade after decade. Then, after a couple of centuries, all those little deaths at the fringes will have eventually worked to the core of democracy, finally killing it.

Democracy must die subtly so that it is not talked about in the media because the little deaths do not register as news, always flying under the radar.

I believe there are more instances of the abridgement of freedom of the people by gradual and silent encroachments by those in power than by violent and sudden usurpations.

Again, the warnings of history should be kept from the people.

If you are a real go-getter in your pursuit of killing a country’s democracy without the country realizing its democracy has died then principle six is going to be the most difficult for you to follow even though it is the easiest.

Principle six is simple: do nothing.

You do not need to be proactive about carrying out any of the other tactics because they will naturally happen on their own without any person or group taking the initiative to start the process.

The natural course of things is for liberty to yield and government to gain ground.

In other words, all on its own a country’s democracy will subtly kill itself. No help needed.

If you become proactive about killing a democracy then you might make a mistake that arouses the people’s awareness, the very thing you don’t want. The invisible hand does not need nor want your help. All you need to do is sit back, relax, watch the democracy gradually die, and keep your mouth shut. If you are alive when the last piece of democracy dies, then do not have a funeral for it. Instead, pretend as if democracy is still alive. The best thing for you to do when democracy finally dies would be for you to convince yourself that democracy is still alive.

In case you were wondering, the invisible hand is (I think) human nature. Human nature is a paradox because humans want to be free, but we fear the freedom because we fear responsibility. Therefore, from time to time, we are usually willing to give up a little freedom if it also means giving up a little responsibility.

Those are the main principles for how to kill a country’s democracy without that country ever realizing it.

To Governors, Senators, members of Congress, state legislators, mayors and everyone else in public service who might read this, as you walk the halls of Congress, the state house, or town hall I hope you can sense the force of the invisible hand that subtly kills democracy without anybody knowing. It is always there, trying to subconsciously guide you into taking gradual steps to kill a little piece of democracy. For the sake of liberty now and centuries from now, I hope you are someone who is not only intuitive enough to sense the invisible hand, but strong enough to resist it.

Dustin Lawson is a veteran and a former minister.

August 12, 2016
The Circular Reasoning of Jesus Belief
Next Post

August 22, 2016 The Castrating Knife of Christian Censorship
Recent Comments
0 | Leave a Comment
Browse Our Archives
get the latest from
Nonreligious
Sign up for our newsletter
POPULAR AT PATHEOS Nonreligious
1