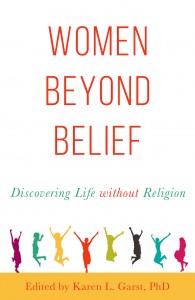 The following is an excerpt from Women Beyond Belief: Discovering Life without Religion:

I met my American husband and moved to the United States at the age of twenty-five. My husband was also an atheist, and while back then it never occurred to me to ask him if he was atheist, in retrospect I understand how important this really was to me. I knew nothing about life in America, and when I moved to Arizona, I had the expectation that life would continue as usual. My goal was to raise a family and make friends. I joined a MOMS Club, organized events, and soon felt at home. I tried to ignore the constant talk about god in politics. None of this made sense to me. I had never heard German politicians say, “God bless Germany.” Yet American presidential elections appeared to always involve pride in the candidate’s Christian belief. To me it seemed quite evident that no atheist would ever be elected president of the United States. I discussed this issue with a friend once and she accepted this fact as normal and even desirable. She said she was never going to give her vote to an atheist. Once again, I was flabbergasted. She smiled at me and said it was okay. She told me that eventually I would find god. I just hadn’t tried hard enough yet. She casually invited me to her church and insisted that if only I gave it a try, I would certainly find faith there. It was different and more relaxed than other churches, she said. She couldn’t wrap her mind around the fact that there were people out there who were not trying to find god. Everyone was, according to her.

Over the next few years I had many such conversations with friends. While they appeared to like me, they also felt inclined to at least try to convert me to their faith. Each of them was convinced that their church was different, that their faith was better, that all I needed to do was try. (Ute Mitchell)

Ute was raised secular in Germany. She is one of 22 authors who wrote an essay about her experience when encountering religion in the United States.

Karen L. Garst has compiled these essays into a book entitled Women Beyond Belief: Discovering Life without Religion,  Dr. Garst became incensed when the U. S. Supreme Court issued its decision in Burwell v. Hobby Lobby in 2014. This decision said that because of its religious views, Hobby Lobby, a craft store, would not be obligated to follow the dictates of the Affordable Care Act and provide certain forms of birth control to its employees. “Will we never end the fight for women’s reproductive rights?” Garst stated. Once again, religion has influenced the laws of our land. Politicians cite their religion in supporting restrictions on abortion, banning funding for Planned Parenthood, and a host of other issues that are against women.

Dr. Garst wants to add a focus on women and the role this mythology has played in the culture of many countries to denigrate and subordinate women. She states that “Religion is the last cultural barrier to gender equality.” And she is right. More and more women atheists are speaking out. And as we all know, if women leave the churches, they will collapse.

I encourage you to check out Dr. Garst’s blog at www.faithlessfeminist.com and to order this excellent book.