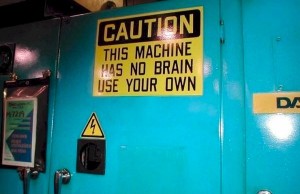 (Editor’s comment: Today’s guest poster says our society is brainwashing our kids and proposes that atheism (in the form of antitheism) is the only reasonable position to hold to make the brainwashing stop. He further states that agnosticism is tacit support for religion. Do you agree or disagree? We would love to hear from you in the comments!).

When a human mind is convinced of the truth of an issue, rational discourse is an ineffective weapon.

The human understanding when it has once adopted an opinion draws all things else to support and agree with it. And though there be a greater number and weight of instances to be found on the other side, these it… sets aside and rejects, in order that by this great and pernicious predetermination the authority of its former conclusions may remain inviolate.

When a change of mind would also involve admitting that one was previously deceived or conned, rational discourse becomes entirely impotent.

It’s easier to fool people than to convince them that they have been fooled.

Admitting that you have been conned into believing something irrational, something utterly without merit and probably harmful to yourself and others, involves telling yourself that you are/were really, really stupid. Very few people have the moral and intellectual fortitude to be capable of doing that.

And so irrational dogmatism flourishes. Those brainwashed as children will mostly remain that way for their entire lives. The war of words between religion and atheism rages on and will continue to rage for a long time to come. There is almost never a winner or loser, by which I mean convincing the other party they’re wrong and gaining a convert, regardless of the forum.

Nevertheless it is a battle which must continue to be fought. If atheists retreat it will leave only the extremists of the biggest religions to fight it out. From such a war there is no possibility of a decent outcome for humanity. (See history for numerous examples.)

In the battle for the minds of humanity, there are basically three positions, atheist, agnostic and theist.

Because serious believers first have to face up to the fact that they have been conned, they’re impossible to reason with. So potential converts really exist only in the middle – agnostics and moderates.

The agnostic category includes all children, at least before they have been brainwashed. Children are by far the easiest people to con. Religions know this well and have been turning young agnostics into believers since religion was invented. They know that if children were left open-minded their congregations would dwindle and die. Few unsullied adult minds would buy into such obvious nonsense.

For atheism to have any chance of winning, the brainwashing of children must be stopped. Trump (not an endorsement) may be intellectually challenged but he does know how to sell an idea. Find a simple slogan, repeat until everybody’s sick of it, and then keep on repeating it. A slogan for caps, bumperstickers, t-shirts. A slogan that is said and repeated every time the topic of education of children is evenclose to being raised.

So that Stop Brainwashing Children becomes a thing.

I don’t know if Stop Brainwashing Children is the right slogan. Please suggest better ones. And then let’s settle on one. And start repeating it over and over and over again.

Which leaves adult agnostics (including lapsed or moderate but not serious believers) who need to be shown that they are a huge problem. Many adult agnostics tick the Christian box on a census form even though they’ve been nowhere near a church or a prayer for decades.

Adult agnostics often say they can’t really be bothered thinking about it. They need to be shown that as G. W. Bush said (also not an endorsement), you’re either with us, or you’re with the terrorists. Every adult that doesn’t oppose organised religion, unwittingly supports it. Saying nothing is taken as meaning you’re happy that the Catholic Church, the world’s largest pedophile organisation, has tax exempt status. Saying nothing is always taken as a vote for the status quo.

A few decades ago in New Zealand a group of Maori radicals began a campaign of vandalism and intimidation which they were hoping would turn into a full scale resistance organisation. Their aim was Maori sovereignty, and they were prepared to use force in order to succeed. But the overwhelming majority of Maori people did not get behind the movement. They were not cowed into sheltering the extremists. And so it never became a terrorist organisation. And the great damage it would have done to race relations had it succeeded was averted.

Extremists can only survive in a climate where there is a groundswell of support, even if it is not vocalised by most supporters. The IRA were strong because they knew they could find shelter wherever they turned. A recent Pew poll in Britain showed that two thirds of all British Muslims would not report a fellow Muslim who they knew to be planning a terrorist attack. Without the support of “moderate” Muslims, the extremists would have nowhere to hide and would ultimately be defeated.

Moderates and agnostics are the enablers of extremists.

This is very important. So it’s worth repeating –

Moderates and agnostics are the enablers of extremists.

So long as agnostic adults tacitly approve of organized religions by not separating themselves from them, organized religions will continue to get away with brainwashing children and running large tax exempt organizations which are of dubious (actually negative) benefit to the population at large. Although it’s fun to battle with religious nutters, we’re more likely to make a difference by targeting the low hanging fruit. The undecideds. And convince them of the importance of taking sides.

At this moment in history, Islamic extremists in Europe and the Middle East are gaining momentum to continue their centuries long religious war of conquest that was (temporarily?) halted and reversed at the gates of Vienna in 1683. On another front Christian extremists are mounting a major assault on all parts of the US government, most worryingly with regard to women’s health and education.

This is no time to be agnostic. Religions have been waging wars on innocent people for their own benefit for way too long. Only a secular atheist majority can defeat bigotry and violent extremism.

If your neighbour is moderate or agnostic, it’s your job to convince them that it’s time to get off the fence. And get them to join the struggle against theistic extremists.

We must educate agnostics into understanding that religion is the world’s biggest problem in that it creates divisions in the world and in communities of all sizes. And that segregating and brainwashing children inevitably leads to division. And bigotry. And hatred. And war.

And that there is no chance of achieving peace on earth unless we Stop Brainwashing Children.

Neel Ingman is the author of the satirical blog Neelingman.com.

February 20, 2017
When Absence of Evidence is Evidence of Absence
Next Post

March 10, 2017 Trump's Kremlin Crew
Recent Comments
0 | Leave a Comment
"recently ol' Luke tried the "indentured servitude & not at all like the slavery of ..."
al kimeea “Is the Atheist My Neighbor?”: A ..."
"he's still at it"
al kimeea “Is the Atheist My Neighbor?”: A ..."
"As a general requirement? As a specific requirement?Nobody should be able to get a degree ..."
HematitePersuasion The Psychology of Religious Nonsense
"I am a long time scientist with an extreme IQ. I asked a question in ..."
GoodScienceFYou Religion and the Constitution: The Official ..."
Browse Our Archives
get the latest from
Nonreligious
Sign up for our newsletter
POPULAR AT PATHEOS Nonreligious
1