Blame the Victim: A Review of ‘The Most Hated Woman in America’

Blame the Victim: A Review of ‘The Most Hated Woman in America’ May 4, 2017 Guest Contributor 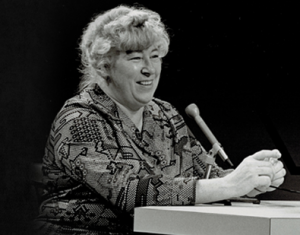 (Editor’s comment:  This is a very passionate account by a man who knew Madalyn Murray O’Hair as a dear friend and partner in activism.  Mr. Zindler is not speaking for American Atheists but he is speaking from the heart and is expressing the tremendous amount of grief the recent Netflix film about Madalyn caused him).

I looked in vain for the label “based on a true story.” After an excruciatingly painful hour and 46 minutes of watching the film, I checked the Web-site for the film and discovered the claim that it was “A true story of the much debated rise and demise of a woman, named Madalyn Murray O’Hair, who was known as the head atheist activist of America. She founded the organization, American Atheist,…” A true story? Not THE true story? One of many possible true stories? Just when did she found an organization named “American Atheist” [singular]? Her first organization was named “Other Americans,” then “Society of Separationists,” and much later, when I was already on the board of directors, did her organization’s name legally become “American Atheists, Inc.” [plural]. As William J. Murray, Jr., has noted in the media, no significant research went into the writing of this film.

As one who lived through the anxiety, worry, fear, attempts to discover what had happened to Madalyn Murray O’Hair, Jon Garth Murray, and Robin Murray-O’Hair—and then the grief and sorrow when the case was solved five years later—I am hard pressed to determine how to deal with the cloud of misrepresentation, fiction, conflation of actual events and persons, distortions, anachronisms and subtext animus that will surely be defended as “artistic license.” In fact, that would be a hopeless task. Let me try to set the record straight as to the most crucial parts of the story.

For several years before the Murray-O’Hair disappearance in September of 1995, several freethought organizations and a number of free-lance enemies of Madalyn O’Hair had spread the vicious—ultimately fatal—rumor that Madalyn was the leader of a cult and that she had fleeced her sheep out of millions of dollars and had stashed it in numerous off-shore accounts to avoid IRS discovery. (During the first Bush administration, American Atheists was the subject of nearly continuous, hostile auditing by the IRS at the bidding of the president himself, who had declared that “atheists should not be considered patriots or citizens: this is one nation under God.”) Clearly, David Waters had heard these rumors before he came to Austin seeking employment as a factotum, not “Office Manager.” A brilliant and talented man, Waters had forged a resume that did not immediately set of any alarms in Madalyn’s mind. She needed help urgently at the time, and did not do her usual due-diligence to discover Waters’ prison record, served for a murder committed when he was sixteen years old.

Waters was able to do virtually anything needed at the American Atheists Center, from working on/with the printing press, the computers, general office functions, and even cleaning toilets. Madalyn quickly came to depend upon him. Then, when Madalyn, Jon, Robin, and those of us who were on the board of directors at the time had to go to San Diego to take part in what was expected to be a long trial in Federal Court, Madalyn appointed Waters temporary Office Manager to run the show in our absence. Normally, Don Sanders would have done that, but he had AIDS and was in crisis at that moment. (Don was Vice President of American Atheists, and President of American Gay Atheists. I had just conducted a memorial service for his partner Mark Francescini some months previously in Houston.)

While we all were away in San Diego, Waters set about destruction of American Atheists. First, he laid off the staff “until further notice.” He pilfered the most valuable books from the Charles E. Stephens American Atheist Library & Archives, took the newly installed library catalog computer and threw it in Lake Austin so no inventories could be done to discover what had been stolen. Most importantly, he cracked the safe and stole hundreds of thousands of dollars’ worth of bonds and then got into the computer accounting system. He robbed all the local bank accounts, but there was one account he couldn’t touch: the American Atheists Trust Fund that we had recently reinvested in a New Zealand bank, for financial reasons I no longer can recall. Wow! There was a million dollars in that account! Confirmation of the rumors of swindling and off-shore accounts!

What Waters did not know, however, was that the million dollars in the trust fund were the result of five years’ worth of highly publicized fund-raising drives. Every month, the American Atheists Insider’s Newsletter had a thermometer graph showing how close to the million-mark we had come. The goal had been reached about a year before Waters came on the scene. Not knowing about the trust fund, Waters logically supposed there must be lots more such accounts, perhaps in a second set of books he had not found. (The film actually has Madalyn showing this imaginary set of books to Waters!) Since the New Zealand account required the signature of an officer of American Atheists, kidnapping and extortion would be the only way Waters could get the money.

The San Diego trial ended early, and we all returned home—“The Unholy Family” to Austin and I to Ohio. When Madalyn got back, the office was closed and empty of staff. She called “Spike” Tyson (along with Don Sanders, apparently part of the composite character “Roy Collier” in the film) to find out what had happened. He informed her that Waters had laid everyone off. Quickly, the extent of the robberies became apparent, and Madalyn found damning evidence implicating Waters, including his signature on legal documents and finger prints on beer cans. (The film depicts Madalyn as an alcoholic, despite the fact that the only time I ever witnessed her drink alcohol was her consumption of a glass of champagne at a special celebration. With her diabetes, consumption of large amounts of alcohol would have been deadly.) Madalyn went to the police to seek the arrest of Waters.

The police were not about to take the word of an Atheist against someone they supposed was a good Christian man. They refused to arrest Waters. Madalyn called me and other members of the board to ask us to send FAXes to the chief of police, the county sheriff, the city attorney, and even a judge. I and everyone else did that—to no avail. No one would lift a finger to address the damages done to an Atheist organization. (In those days, no property insurance could be purchased for the Atheist Center due to the discriminatory policies of insurance companies and the controversial reputation of Madalyn O’Hair.)

Weeks passed and then, for reasons of which I am unaware, Waters walked into the police station and confessed to the robberies. The police told him he really ought to pay back the Atheists, and he promised to do so. Then, with a kiss on the wrist, they sent him on his way. The police had declared open season on Atheists.

Madalyn published a scathing account in The Insider’s Newsletter of the robberies, Waters’ criminal history, and the nonfeasance of the police. Although Waters almost certainly was already assembling his gang by that time, Madalyn’s article almost surely stoked his fury to the ignition point.

As the title of this review indicates, the film sets up a false scenario where viewers might think that Madalyn (and Jon and Robin?) got her just deserts, given all her imagined swindling and embezzlement—in addition to the film’s ugly caricature of her character. The film not only blames the main victim for her death, it implicitly blames the deaths of Jon and Robin on Madalyn. This is shameful. This is unutterably shameful.

(For full disclosure, I must indicate that I am not without bias. Madalyn was like a second mother to me and my wife Ann, and my daughter Catherine and Robin were friends. The Murray-O’Hairs were welcome guests in our home, and we never experienced anything less than warm and stimulating hospitality at their home on Greystone Avenue in Austin. I shall ever mourn their loss.)

May 27, 2017 THE TROUBLING OF MY SLEEP
Recent Comments
0 | Leave a Comment
Browse Our Archives
get the latest from
Nonreligious
Sign up for our newsletter
POPULAR AT PATHEOS Nonreligious
1