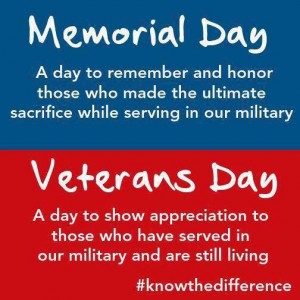 Memorial Day is a day of remembrance and reflection upon those who have sacrificed their lives while serving their country in the nation’s uniformed services. Among those dead, who represent all religions and ethnicities, there are atheists and other nonbelievers who lived and died beside their religious counterparts, demonstrating that there are indeed “atheists in foxholes” and some of those atheists have died there. Atheists serve for many reasons but they don’t serve for “God and Country”, they serve their country and their brothers and sisters in service.

Every year, there are governments and organizations who hold services to honor those who died but a visit to any of these services quickly shows they are not commemorating and honoring the dead, they are commemorating and honoring the Christian dead. These services are organized by Christians, are filled with Christian prayers, themes, and imagery, and through their construction and imagery, specifically exclude those who are not Christians, including atheists.

This Memorial Day, we must remember those who have given everything they had to give, including atheists and other who are not of the Christian faith.  Christians do not hold a monopoly on service and sacrifice and while I honor all our lost ones, I am saddened that the sacrifices made by atheists and other non-Christians are marginalized and forgotten.

To those who are memorializing a loss today, as I am, I extend my condolences for your loss and I deeply thank your loved one for his or her service.

June 14, 2017 Let's Pray Those Guns Away
Recent Comments
0 | Leave a Comment
"The empirical scientist has his toolbox and methods of logic and analysts that work in ..."
Ame Paradigm Shift: There Is No Jesus ..."
"recently ol' Luke tried the "indentured servitude & not at all like the slavery of ..."
al kimeea “Is the Atheist My Neighbor?”: A ..."
"he's still at it"
al kimeea “Is the Atheist My Neighbor?”: A ..."
"As a general requirement? As a specific requirement?Nobody should be able to get a degree ..."
HematitePersuasion The Psychology of Religious Nonsense
Browse Our Archives
get the latest from
Nonreligious
Sign up for our newsletter
POPULAR AT PATHEOS Nonreligious
1