It's about STRONG WOMEN 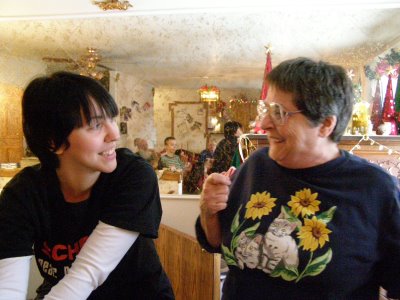 My oldest daughter, Angel and my mom, Lou Ann.

So many of the visitors who are reading the stories on this blog have left a comment to the affect that, “You & Laura are amazingly strong women.”

I’ve actually done some thinking about that ~ and wanted to share a bit of it here.

We have been “strong,” yes ~ but is that such a good thing? For myself, I finally realized that being so strong enabled me to live a life that was not healthy for me or my children ~ or for my ex-husband for that matter. As long as I could “handle it” ~ I did.

Allow me to boast for just a minute about how “strong” I was.

I was so “strong” that I bore seven children ~ six of them in eleven years ~ five of those were by c-section. I was so “strong” that after three cesareans and an attempted home birth which ended disastrously in a fourth surgical delivery, I had the “courage” to try again ~ my fifth child was born at home with the assistance of a midwife. Through all my years of childbearing, I was so “strong” that I also ran a (fairly) successful home business ~ a local family newspaper which I started from scratch even though I had no training or education in either business or journalism. Although I was physically exhausted, still I had the “strength” to act as a buffer for the children ~ doing what I could to shield them from their energetic and extremely intense father’s endless micro-managing and tyranny. I was “strong” enough to literally spend HOURS *every day* ~ year after year, dealing with Warren’s insecurities and trying to help him overcome what I perceived to be his “poor communication skills.” There was more ~ but I think that’s enough to make my point.

It was only when I was so worn down physically that I simply could not go on that I peeked my head up over the box (of the fundamentalist “biblical worldview”) and started asking myself not, “Can I do this?” but the much more sensible question: “SHOULD I be doing this?”

I remember when Angel first began “acting out” (she was about 9 years old) ~ inflicting injuries on herself and similar behavior which I mistakenly interpreted as some sort of bizarre need for sympathetic attention. At that time, it did occur to me that the frustrating and crazy-making treatment she was subjected to by Warren on a daily basis could be causing the trouble she was experiencing ~ BUT, the thought that kept me from really making the connection was this: At least he’s not as bad as some of my creepy step-dads had been. At least he’s not an alcoholic, he doesn’t gamble away the grocery money, he doesn’t beat the children ~ really, he could be a whole lot worse as far as fathers go.

By comparing my ex-husband to my step-fathers (and my first husband), I was able to actually be GRATEFUL for him ~ because really, I had been so familiar with a whole lot of truly horrible abuse ~ and somehow that made it easier for me to rationalize and excuse away Warren’s unceasing emotional and mental torment. I was one tough cookie ~ I could take it.

Angel couldn’t. And I realized years later that, not having my background of “serious abuse” (as I thought of it) ~ my daughter just couldn’t handle being treated as though her thoughts, feelings, needs, desires and ambitions were of no consequence. Does that mean that I don’t believe Angel is a strong woman? Not at all ~ only the strength she possessed was in having the sensitivity to react when her personhood was being threatened, crushed, and denied. She had a healthy self-protective instinct which in my own life had been all but vanquished due to years of never having my own worth affirmed and protected.

Even after becoming a Christian, I was taught that my worth was only “in Christ.” The bible made it clear that what I DESERVED was eternal Hell ~ and there was nothing in me that merits God’s grace. Through faith, I could receive His forgiveness ~ yes ~ but even that faith was a gift from Him ~ so there was no room for boasting. I was taught that my very best was like “filthy rags” to God. Whatever I accomplished, whatever good I did, whenever I excelled in any way ~ I’d better not take ANY credit ~ but must always give all glory to God.

Not really changing the subject ~ I received a remarkable letter a few days ago ~ an email from my mother. She’s been following this blog and ~ as I discovered ~ has been processing the pain in her own life as she’s been reading the stories and thinking back to the days of my childhood. In her letter, Mom told of many horrible abuses which she had suffered as a child ~ she wrote about how her own alcoholic mother belittled, humiliated and beat her, her stepfather nearly molested her, her first husband believed that he “owned” her and proved it by raping her repeatedly on a daily basis …

The extremely defensive tone of Mom’s letter made me uncomfortable ~ so I called her up and asked, “What’s this all about?”

Well ~ it turns out that, ever since reading the comment in the Salon article about my “mother’s series of live-in boyfriends who molested [my] sister” ~ Mom has been feeling ashamed of her past and wishing everyone could know that she’s not like that anymore. After listening to her on the phone, I said, “Mom ~ we have to talk.” We spent a couple of hours together at my home that afternoon ~ amazingly, we were actually able to talk without interruption (anyone with kids knows what a miracle that was).

I told my mother that since leaving fundamentalist Christianity, I’m discovering that there are plenty of people ~ the majority of people, in fact ~ who are actually quite understanding and non-judgmental. People (outside the small circle of fundamentalist friends whom we have surrounded ourselves with over the years) are really very tolerant and they understand that we are all born into situations that we did not choose and have very little control over. “People don’t expect you to be perfect. They understand that you are human and humans make poor choices sometimes. Nobody is condemning you, Mom,” I said ~ “nobody except you.”

And I can completely understand why my mother would be so hard on herself ~ I was the same way when I was a Christian. I never would have admitted it before, but as a Christian, I was loaded with guilt and shame. It’s something that my uncle pointed out when we were writing ~ and I was mortified when he wrote in a letter that I seemed to carry a lot of guilt. No ~ I told him ~ I have been forgiven, I am a New Creature ~ Jesus paid the debt for my sin and now I have peace with myself and with God. I believed that ~ it didn’t stop me from feeling guilty ~ but it did prevent me from recognizing that I felt guilty.

My mother has been pretty tough in her lifetime too. She has her own “Amazing Bosch Universal Mixer” stories that would leave all of us horrified and shedding tears of compassion. But above all, Mom’s a survivor ~ she’s made it through all of it and she’s still plugging away ~ still has her fire and a sense of humor. She is strong ~ she is amazing ~ and I’m so proud and honored that she is my mom.