Raising My Daughter to be a Keeper at Home: Maybe, maybe not! 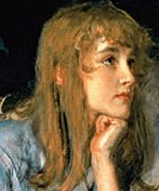 Recently in blog land there has been a good deal of discussion over whether daughters should be sent to college and prepared for careers or if they should be trained to be keepers at home and remain in their parents’ home until marriage. A lot of prayer and thought has gone into these posts.

The Scriptural Authority for daughters remaining at home seems to be found here:

3 “When a woman makes a vow to God and binds herself by a pledge as a young girl still living in her father’s house, 4 and her father hears of her vow or pledge but says nothing to her, then she has to make good on all her vows and pledges. 5 But if her father holds her back when he hears of what she has done, none of her vows and pledges are valid. God will release her since her father held her back. 6 “If she marries after she makes a vow or has made some rash promise or pledge. (Numbers 30:3-6, The Message)

I must be just plain stupid, but I don’t see how this really relates to keeping a young woman from a life of her own. As I have said in the comments I’ve posted in response to some of these posts, I fully, 100% respect their right to pray for such a life for their daughters, to desire such a life for their daughters and even to plan for such a life. HOWEVER, unlike many of the parents out there who have been strongly influenced by Bill Gothard and ATI/IBLP or Vision Forum or similar organizations, I do not presume to know what course my wonderful daughter’s life will take. God, on the other hand does know:

For I know the plans I have for you,” declares the LORD, “plans to prosper you and not to harm you, plans to give you hope and a future.Jeremiah 29:10-12(The Message)

I try to imagine the vanity and pride that lead parents to boast so knowingly of what God has in store for their daughters! (Especially when their daughters are not even teenagers!!) Show me where the Bible says “sit home and do your folk’s housework and let the world pass you by.” I understand that I am exaggerating this for effect! Yes, I know that those young ladies are “free” to do Christian works, needlework, run a business from home [apparently after her father has approved it.] Good grief! In Proverbs 31 We are told of a very industrious, business-minded woman—not a timid wife who waits for a man to hand her a “to-do list” for the day!

I laughed when I saw how Discovery had “repackaged” the Duggars to make them seem more “mainstream.” Each of the big girls has a stated “career” goal. Except the joke is on Discovery—the girls each named one of the very few “occupations” open to them via ATI/IBLP and Bill Gothard. I’m all for girls being nurses or midwives or hair stylists—if that’s their choice. Not if it’s the lesser of the evils available to them.

The notion that a young woman today can grow up so totally sheltered that college could jar her out of her well-honed beliefs is scary. Yes, Scary. If we as parents have done our job in “training up our children” then there reaches a point where they must try LIFE. Go out and live “in the world” but not become “of the world.” I totally applaud recent efforts to encourage modesty, abstinence and general good manners. It’s about time on all of that. But saying that a young woman could be harmed by a “godless boss” tells me her parents didn’t bring her up with enough “street smarts.” Or that she needs to run home and ask Daddy before she makes a decision–what kind of helpless ninny do you want her to be?! Parents like this haven’t let their daughter have the kind of formative experiences that let her test God’s love, protection and guidance. No one sees a Godless boss or College as necessarily harming to a young man—as long as he is in college to learn to support a family!

The whole issue of “oversheltering” Christian kids is part of what gives us as a group a bad reputation among the unchurched. Along with discussions that appear idiotic from the outside [such as “Trick or Treating is just fun” or is it “Devil Worshp?”) the whole idea of cocooning our kids at home with only their siblings [ala the Duggars] looks to the rest of the world like a Freak Show. It puts off seekers, too, who fear they will never be “Perfect Enough” for any Church—let alone for Eternal Life.

Today I came across an excellent discussion of this problem of oversheltering our kids here:

How can a young woman carry out the Great Commission if she is to go no further afield than the house she grew up in? How will she be a defender of her faith if she never meets anyone outsideof that faith?? Sorry, folks, but I want more than this for my daughter!!! I know our lives on Earth are but a blip on the eternal radar and cannot come close to the joy we will all find in Heaven, but I want more for her!!!!

God has blessed my daughter not only with deceptive charm and fleeting beauty, but also with an excellent BRAIN! I would sincerely hope she would rebel with all her might if I tried to foist such a life on her!! How many daughters raised to be purely “Keepers at Home “ will rebel—in harmful ways??? I’d be interested in how many MySpace and Facebook profiles are made by kids who have chucked Mom and Dad’s beliefs for what they see as “Freedom?” How many single Moms out there are raising kids alone because their parents tossed them out for having sex [and embarrassing them]? How many will enter gay unions to spite their parents? How many girls will unnecessarily suffer depression and withdraw from life from having boundaries meant for a toddler imposed on them when they are young adults? How many will become stereotyped as “old maiden aunties” from not circulating widely enough among their own age group to find a suitable husband? How many will not marry because of the exalted standards imposed by the most high-minded of “courtship only” parents? How many will cut their hair and flee and ditch their Biblical names for something more worldly that lets them hide? Even the Amish acknowledge rebellion is often necessary to becoming fully accepting of God’s dominion over all.

What I fear most in all these homes is an undercurrent trying to move us as Christians to a Theocracy—a “Christian State.” “What’s wrong with that?” A LOT. We in America are freer to express ourselves than anywhere else on Earth. We SHOULD praise God for that freedom. I don’t want to go back to a mythical place in time in which supposedly women happily submitted in all things to her husband, gave him all her earnings or property and her vote, to spend her life having child after child whether she wanted them or not. Should a woman truly choose this then FINE!!! But, don’t raise girls thinking this is all they can have!!!

I also have a problem with legalistic dress codes. I don’t “get” that either!! I know we are not to dress as men and vise-versa. Still, why are skirts to your ankles and big blouses the only acceptable garments? Swimming in a jumper and blouse?? Give me a break!!! And how come men can’t just keep their own thoughts under control—why is it the fault of the woman????? Why not just wear Burkhas and have our 11 year old sons drive us like in Saudi Arabia? Why not unite with Saudi Arabia and keep women away from all men not in their own families!! I lived in a country where the dictator ordered women only to wear long skirts. Guess what—you can do most things just fine in a skirt. Except flee an attacker. Surely modesty and decency are possible in other forms of attire as well. We don’t all dress like hookers even if we don’t wear a long skirt.

So, uber-legalistic parents, I don’t believe you when you say you “know” what your daughters lives will be!! I do know that right now, at age 11, my daughter has excellent plans:

To be a Bearcat Cheerleader!!
To be a hair stylist and nail lady
To work at this while going to college (and part-time afterwards)
To be an art teacher and artist
To drive a VW Bug convertfble or a PT Cruiser convertible
To write Christian Music
To get married and adopt children!

She’d like to teach in a Christian School and does not plan to move out on her own—she knows Christian Schools pay poorly so she plans to teach and live with me! I’m 100% behind this plan because

Obviously, she will have a tough time getting married though with no father to approve her choice! [Don’t get me going again!!!]

I expect some of the flames I get for this to be the temperate or the recent wildfires. Mind you, these are my own opinions. In America you are still free to have your own as well. Let’s keep it that way!

November 5, 2009
Not Created to Be His Doormat But Rather For So Much More
Next Post

November 5, 2009 Shutting Off My Brain ~ Part 3
Browse Our Archives
Follow Us!

Nonreligious
Open Thread Covid 19 - Trump's Base Does...
No Longer Quivering

Fishing
Eleanor has the most supportive friends.
view all Nonreligious blogs
Copyright 2008-2020, Patheos. All rights reserved.