Daughter of the Patriarchy: Scooby Doo and the Angel

Daughter of the Patriarchy: Scooby Doo and the Angel January 12, 2010 Guest Contributor 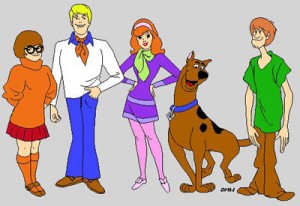 By my eighth birthday, Anna’s church had become our own. My father attended sporadically, but my mother and I adopted a weekly ritual of driving forty minutes through the woods, to the highway, passing numerous small churches on our way to the secret annex of the YMCA. No one would have guessed there was a church there, unless they happened by as we all bustled in with our flowing skirts and dresses and exited under the mid-afternoon sun. My mother was enthralled, talking excitedly to Anna and her new friend Sheila every day. A frequent topic of conversation was her journal, in which she recorded her thoughts and prayers as well as verses from the Bible that seemed to answer every concern in intimate detail.

During this year my mother decided that we would stop cutting our hair. I was relieved; I was afraid of the stylist with her cold, sharp implements of destruction. Excitedly I watched as my hair crept toward my shoulders and my bangs began to blend in, leaving my forehead free. I was on my way to long, luxurious, elegant hair like the pastor’s daughter, Sara had. I didn’t mind, either, that the supply of pants in my wardrobe had dwindled. I had hated leggings, especially the ones with those annoying stirrups that awkwardly bunched beneath my heels. I began to perfect the art of climbing trees without exposing my underwear. It was a skill at which I would become adept.

In Anna’s family, my mother seemed to have found us the perfect family friends. We passed a Christmas meandering through Peddler’s Village, sipping hot cider and marvelling at the gingerbread houses entered in the competition. Dazzled by the lights, the music and cheer, I gaped at windows filled with colourful toys and implored my parents to buy me absolutely everything.

But a better gift was to come: as we passed a set of holly bushes on the way to the parking lot, I heard a faint mewing. Trembling with excitement, I crept toward one of the bushes and found a pair of golden eyes peeping at me with timid hope. My family and Anna’s gathered around; I eyed Sven with distrust, fearful that he would scare the kitten away, but he kept a polite distance. My parents inquired with the owner of the shop beside the bushes, but no one had seen the little tiger-striped kitten before. Within minutes she was resting in my mother’s lap as we drove home, carpooling with Anna’s family. “Can I hold the kitten?” I asked periodically. “Not in the car,” she responded.

As I waited anxiously in the back seat of the van beside Sven, I decided to tell him about the angel I’d seen only a few weeks earlier. “I was watching Scooby Doo,” I whispered. My mother was convinced that the show was evil as it featured ghosts and crime. But I had a small antenna-bearing television set in my room and would frequently set the volume low to watch after my parents had gone to bed. The television dated from the early 1980s and was controlled by crank knobs on the front of the set.

“It was past my bedtime. Suddenly an angel appeared.” I frowned. I had been convinced that it was Jesus I’d seen, with a white robe, a blue sash and flowing hair, just as he was depicted in the coloring books. But my mother told me that no one had ever seen Jesus since the New Testament, and therefore it must have been an angel. Angels were asexual beings, according to Anna’s church, but they looked male. The common depiction of angels as feminine was just another aspect of female-worship in our perverted society, Pastor Jacob had explained. It thus made perfect sense to everyone but me that what I had seen had been an angel. I stubbornly continued to believe that it was Jesus for several weeks, but was eventually won over by their logic.

I continued to explain the story to Sven. “He didn’t say anything, so I hid under the covers.” I hadn’t felt afraid, exactly – even if I had, I knew the bedspread would not protect me. Hiding under the covers felt like a scripted action, something I did because I didn’t know what else to do. “When I came out, he was gone and my TV was broken.” I had got up from the bed and turned the knob. No response. I unplugged it, plugged it back in and tried the knob again. Still nothing. Then I ran into my parents’ room, breathlessly relaying the events of the night. My mother was unimpressed. “What were you doing up this late with the TV?” she asked.

Not to be outdone by my story, Sven responded that he had seen several angels in the sky over his backyard. I was crestfallen – my lone angel wasn’t so special, after all. “And once when I was reading the Bible, my hands started to go like this.” He lifted his arms slowly as if to raise the book above his head. “It wasn’t me.”

I named her Mandy for the little striped ‘M’ above her eyes. She would become an outdoor cat, as my mother was convinced that all animals belonged outside. Still sporting her wiry kitten fur, Mandy had no idea that she was to become the matriarch of a lineage of cats, whose genealogy I dutifully recorded through the years.

As I scratched Mandy’s little head behind the ears, I thought about the angel. He would become an anchor in my young life: I clung to him stubbornly, insistent that God would not have bothered to send an angel to someone who was bound for hell. He had appeared in the midst of my television program to save me from disobedience to my mother: perhaps he would be there to warn me whenever I strayed from the straight and narrow.

Or maybe he had come to let me know that God’s patience was wearing thin: next time, I would be on my own. I bit my lip. Whosoever hateth his brother is a murderer, 1 John 3:15 had said, and ye know that no murderer hath eternal life abiding in him. I had hated my brother before he even had the chance to be born: surely salvation was already beyond my grasp.

January 13, 2010 New NLQ Series: The God Card ~ Thoughts on Patriarchal Teachings, by Journey
Browse Our Archives
get the latest from
Nonreligious
Sign up for our newsletter
POPULAR AT PATHEOS Nonreligious
1