Daughter of the Patriarchy: Hairspray 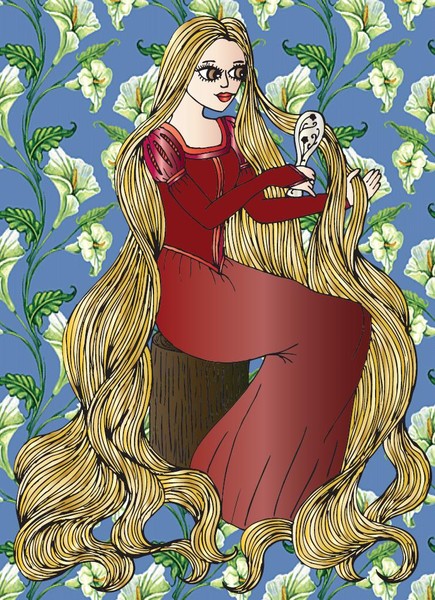 I awoke with my lungs filled with something pungent and sticky. I sat up groggily in the upper bunk, fumbling around for a watch or cell phone to tell me why it was still dark when so many beds were vacated. A light shone dimly across the long dorm room through a hazy moisture hanging in the air. My hand closed around someone’s small alarm clock, and I squinted at it. 5:30am.

It was hairspray, I discovered as I staggered toward the bathroom. Lithe, elegantly dressed young women gathered cheerfully around the bathroom mirrors as they unrolled golden-flecked curls that fell gently to their thighs. Each strip of hair, carefully unbound from a foam roller, was sprayed within an inch of its life until it hardened into rigid perfection.

I washed my face, trying not to look in the mirror. My own hair fell only to my waist, though it hadn’t been cut since I was seven years old. Ten years. Surely that would have been long enough to reach its terminal length. I felt distinctly out of place, even suspect. Maybe people thought I trimmed it. Why else would only my hair end before it reached my hips? Worse yet, perhaps it was an outward sign of my inward rebellion. God would not bless my hair and let it grow until I’d fully surrendered to His will for me as a submissive homemaker.

As I looked at the other girls at the camp, it occurred to me with painful clarity what I’d observed from the very beginning: a double standard.

Women in my church were to be modest in spirit and in dress. Never would a godly woman wear a sleeveless dress, much less a spaghetti strap tank top. Never a pair of pants, nor a piercing: even earlobes had to be virgins. Hair was not to be cut, even trimmed, under any circumstances. Indeed, our pastors liked to tell of a story of missionaries who were assaulted with scissors, yet their hair supernaturally resisted the blades as a testimony to the purity of their hearts. The same set of shears, allegedly, was applied to the hair of worldly women with visible success. I wondered what kind of lunatic got up close to all these women with a pair of scissors.

In addition to not cutting our hair, we were not to touch makeup. Max Factor and all its sister companies, our pastor had said, were inspired by Satan to tempt men with false, worldly beauty and to bewitch them with lust. And yet I noticed, with a mixture of amusement and pain, that the popular girls of my generation were the same girls who would have been picked for the cheerleading team if we had attended public school in mainstream America.

The girls who felt the most favour from godly young men seeking wives in courtship were the ones whose hair fell in light golden ringlets, whose modest clothing betrayed no unwanted lumps and whose skin bore no blemishes. Girls who moved and spoke gracefully, who looked like they’d come to the Message after million-dollar careers as swimsuit models. How ironic, I thought as a teen, that the women often considered the most spiritually mature were those with the loveliest faces, and the ones whose voices rang clearest when they sang their Sunday specials.

We were no less expected to be beautiful than worldly women. Indeed, many of the same characteristics were prized: thin but curvy figures, symmetrical faces with unspeckled skin, lustrous hair, usually blonde but always shiny. But we were robbed of all the means by which worldly women could hope to attain some of these expectations: all makeup, including foundation, was banned. As I struggled through a tumultuous adolescence of zits and weight gain, I began secretly (and with a guilty heart) to apply mineral foundation to cover the hated spots. My mother pretended not to notice. I jealously guarded my secret against everyone else, so successfully that women at my church began to comment on my flawless skin and how I certainly didn’t need makeup like those worldly tramps outside.

Though it preached modesty, fundamentalism did not release women from the burdens of perfection thrust at them by the worldly media. We were simply rendered powerless against them: if we weren’t, as it were, “born with it,” we had simply to live with the consciousness of our own inferiority. No bitterness or envy were we permitted when we had to wash the feet of our gorgeous sister, knowing that she had always looked that perfect. And when she inevitably brought the news of her engagement to the handsomest boy in our congregation, we had to share her happiness with purity of mind. No cynicism could be allowed to poison our thoughts and harden our hearts. Surely God had brought them together. True Believers wouldn’t be swayed by ephemeral physical beauty! After all, we were modest…

Hairspray seemed to be the one implement allowed in the beauty arsenal of Louisiana’s youth camp for Message of the Hour believers. I stared with bewilderment at the lineup of girls, hair swaying like the boughs of so many weeping willows, perfectly curled and manicured. I looked at my own bedraggled locks and snorted, then crawled back into bed. Church wasn’t for another two hours yet. The refuge of the ugly was, ironically, extra beauty sleep.

April 16, 2010
More Catholic Than The Pope: I could be good for him if he would love me and care for me
Next Post

April 21, 2010 Michelle Duggar to Accept "Mother of the Year" Award at Vision Forum's "Triumph of Life" Baby Conference
Browse Our Archives
get the latest from
Nonreligious
Sign up for our newsletter
POPULAR AT PATHEOS Nonreligious
1