Daughter of the Barren 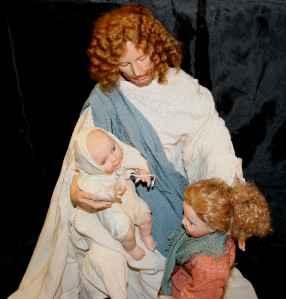 The first time I saw my mother cry, she was hunched over the dresser in her bedroom, silent, her shoulders shaking. I had almost walked into the room, but when I noticed her posture I paused and silently backed away, then ran, on tiptoe, to escape the jarring sight. I had not yet turned ten, but I knew what her tears meant.

She was crying for my brother, the one lost in miscarriage just before she’d begun taking me to our new church. Every Christmas, a Precious Moments ornament, a little blue angel sitting on a cloud, was delicately unwrapped and hung, either on the tree (if we had one), or on the mantel. My mother insisted that this baby was part of our family, and that we would meet him one day in heaven. Once, she had a dream so real that she was convinced that God had truly allowed her to talk to him. She remembered his striking blue eyes like my father’s, his tall, healthful twenty-year-old frame, and his curly hair. Sometimes on the street she’d pause, looking at some young man, sure that she had seen a vision of her son. She found some measure of peace in knowing that he was no longer in the cold, palm-sized body she’d had to give away in the night. My brother’s name was Samuel – the name she had planned to give me when the doctors mistakenly told her that she was carrying a boy. I’d surprised everyone by being a girl, maybe even myself.

When the Ashton Drake company created a porcelain doll of Jesus with two little children, a boy and a girl, she bought it right away. My brother had been the size of the little baby boy, tucked neatly in the palm of her hand, when she lost him. I looked at the dolls with interest: there were two children, after all. The girl, I asked – was that me? No, she answered. The little girl had blonde, curly hair, unlike mine. She stood for my mother when she was a little girl. I was not one of the little children Jesus had asked to come to him.

My mother kept a diary that became an increasing fixture in her life. It was through her journaling, she said, that she first found God. In her daily scripture reading, she found that the verses she read matched up with the prayers she’d recorded. Her journal was a transcript of her conversations with God. She also kept a book of letters to my brother: some in verse, some in prose. I was allowed to read it. One of the letters, addressed to him in conversation, talked of the gaping hole left in her dreams when she’d lost him. She talked about how he, as a boy, would have made our family complete. How he would have allowed her to experience mothering a son. How I would have learned to be a big sister to him, and my father would have had someone to follow in his footsteps. She would have finally been the one to give birth to the only child in all of our extended family who could carry on the family name. Without him, our lineage was dying – cursed, perhaps, by God for my forefathers’ sins.

In the church, my mother found comfort from other women who understood the pain of miscarriage. Most of them had more than one child. Indeed, our pastor’s wife was about to have her seventh. All of them eschewed birth control and talked of leaving the size of their families to the Lord. As a child just learning the facts of life, I became convinced that sex was something a couple did once, on their wedding night, after which the woman could spontaneously get pregnant for the rest of her life. I became terrified that somehow, somewhere (in the pool?) I could come in contact with sperm and forever be subject to random childbearing.

The Lord blessed his faithful with many children, my mother learned. She had always wanted a large family. I knew that my parents were actively trying to conceive. The fact that it had taken seven years after me even to get pregnant in the first place did not bode well, but perhaps the Lord would bless her now that she had come into the Message of the Hour and was feeding on the Word. Now that she was obeying his will, she would be blessed with a quiver full of children, right?

My mother became convinced that the Lord had promised her a son. When we saw garage sales full of baby items, she took them as a sign that pregnancy was coming. She would have her son. The Lord has simply tested her with the miscarriage. Perhaps the miscarriage had been the cost of sins in her youth – now that the price was paid, she was free again to bear children for God. She began to collect some of those baby toys, car seats, strollers and stow them away. She kept my high chair in the corner of the basement, waiting for another diapered bottom to sit in it.

Isaiah 54:1 became my mother’s mantra. Sing! O barren, thou that didst not bear…

It grew harder for her as children were born in the church and she was left behind. Her friend Rachel, newly brought into the Message, had borne a son mere days from my brother’s due date. My mother had a special tenderness for this child, who would have been her son’s playmate. She fought the bitterness of loss by showing some kindness to this other son, and spoke hopefully, faithfully about the promised son she’d receive. She talked about naming him Isaac as a witness to God’s promise not to leave her destitute. She talked about how he would redeem our family name from dying out, and how she would be vindicated before everyone as a blessed woman of God when she gave birth, at last, to a son.

I tried to participate in my mother’s excitement. I pointed to baby carriages on the side of the road, watching her eyes light up as she sang the praises of God for not forgetting her or leaving her desolate. But when she brought up Isaiah 54:1, I protested, hurt.

“But you’re not barren. You have me.”

She ignored me. God had given her that verse. I could not take it away.

I began to suspect that it didn’t matter, in my church, if you had a daughter. Daughters didn’t count. Daughters couldn’t take over the family business or carry on the family name. God didn’t think as highly of daughters. The Bible spoke of women who were blessed with many sons, not daughters.

My mother had no son. She was barren. Yet I was there to witness her barrenness.

Somehow along the way, I had ceased to feel like a child. I had become that wicked one, whose hatred had killed my brother. I’d screamed at God in my sullenness that I wished she wouldn’t be pregnant – then suddenly, tragically, she wasn’t. Now I watched as my mother tried to rebuild the loss of her son with the paraphernalia of infancy, and I realized that I had destroyed her life and dreams. I’d been doing so since birth, when I turned out not to be a boy.

As she confided in me her longing for a baby, I tried to swallow the guilty, defiant cries that rose in my throat. Why don’t you care that you have me? Don’t you realize I’m your daughter? I wanted to yell, but it didn’t matter. I wasn’t her son.

June 11, 2010 Testing the Spirit of Quiverfull: Hierarchy & Control
Browse Our Archives
Follow Us!

Door in the Dragon's Throat: The Lecturing Westerner
What to make of Gozan? Gozan, from the beginning, has been described...
view all Nonreligious blogs
Copyright 2008-2020, Patheos. All rights reserved.