"Husbands love your wives …" ~ the Peanut Butter in the Patriarchy trap!

My daughter, Berea, has mice in her new apartment ~ and this morning she asked on her Facebook status: WHAT DO MICE WANT? 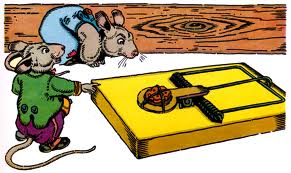 I’ve lost track of how many times I have been told that the only reason wifely submission did not work out in my marriage was because I was married to a jerk.

Recently, “Karebear” commented: I hope that you two understand that the groups/husbands that you were with were not practicing a Godly lifestyle. The bible does call women to be submissive to their husbands but it also calls men to love their wives …. And, the bible defines love as, not self-seeking, protective, kind ext….

Husbands are commanded to love their wives and this love of a husband is only of value if it is sacrificial, Christ is the example of sacrificial love (Servant King–NOT TYRANT).

Submission of a wife is only a beautiful gift if the context is respect as opposed to fear.

The impression I get (forgive me for speaking out of ignorance) is that your marriage was codependant and that your husband had a weakness for malignant narcissism/Narcissistic Personality Disorder.

So in other words ~ the failure was not in the teachings of Patriarchy ~ but in our practice of it ~ we were doing it wrong.  These defenders of Patriarchy assume that I was submitting out of fear and they’re also convinced that Warren never sacrificed for me and the kids.

Let me state plainly that throughout our 18 year marriage ~ I never doubted for a minute that Warren loved me and the children more than himself and that he always put our welfare ahead of his own concerns.

Here’s the thing: Over the years, as we got more and more into the patriarchal mindset ~ our definition of what it means for a husband to “love” and to “sacrifice” morphed into some pretty twisted ideas!

The teachings we learned from leaders such as Jonathan Lindvall, Doug Phillips, etc. led us to believe that the husband loves and serves the Lord as “protector, provider, and priest” or sometimes stated, “prophet, priest, and king” of his family ~ all important aspects of his role as “head of the household.”

In every sermon, book, magazine article, radio interview, etc. which taught about a wife’s submission ~ there was *always* included the admonition to husbands that they “love their wives as Christ loved the Church and gave Himself up for her.”  WE UNDERSTOOD THAT PART OF THE PLAN!!!

Truthfully~ “Husband’s love your wives” is the part that makes the whole Patriarchy deal seem so bloody attractive!  What woman doesn’t want a husband and father for her children who willingly lays down his life and serves, protects, provides ~ a man who fulfills his leadership role with gentleness and competence?

That’s exactly what we all wanted.

But get into those teachings a little farther, and you’ll discover that “protector” means CONTROL ~ it means that a man, who is ultimately responsible for his family’s spiritual well-being and who must one day stand before his Maker and give an account ~ such a man believes he is entitled to know every detail of his wife’s and each child’s every move, every desire, every thought …  How else will he be able to protect them from the Enemy who seeks to lead them astray and destroy them?

Kristen Rosser, aka “KR Wordgazer,” writes the FAQs for No Longer Quivering which address Quiverfull/Patriarchal teachings from a biblical standpoint.  In “Does Patriarchy Glorify God?” Kristen makes the excellent point that the teachings and practice of Patriarchy actually belittle and diminsh both God and men ~ by putting God in a box and men in shoes which are much too big as they are expected to fulfill roles for which God alone is sufficient.

I am especially looking forward to KR’s upcoming FAQ: “The Bible and Male Headship.”

It’s been explained at NLQ before ~ in the comment section and also on the forum ~ but I think it needs to stated over and over again: If a husband is truly loving his wife self-sacrificially ~ then the issue of Patriarchy ~ of headship and submission ~ is a moot point.  A husband who loves his wife has a relationship of mutuality which has nothing to do with the teachings we are addressing here at No Longer Quivering.  Warren and I had that sort of love *before* we were introduced to the teachings of Patriarchy.

… but of course, he did have some quirky ways ~ he was insecure and had a tendency to micro-manage things…

What we’re talking about here ~ and what the QF/P teachers are telling married couples is that when husbands behave badly ~ their wives’ loving submission is the key to transforming the slackers and the abusers into bold men of God who will step up to the plate and lead their families to the glory of the Kingdom!

With sermon titles such as, “How a Wife Can Use Reverence to Build or Save Her Marriage” or “The 7-Fold Power of a Wife’s Submission” ~ these bible teachers are setting a trap ~ and “Husbands love your wives …” is the peanut butter they use ‘cuz they know that’s what women want ~ it gets us every time!!!

Sadly, the way it works out in this practice of Patriarchy ~ it is the wife who ends up doing all the Jesus-like self-sacrificing … to the point of self-abnegation and burn-out.  And it is the children who end up (in extreme cases such as with my oldest daughter) in the psych ward ~ or else spending years playing catch-up in the process of discovering who they are, what they are like, what they desire, what they believe …

As for the men?

I think Coldplay says it best in their song ~ Viva La Vida:

I used to rule the world
Seas would rise when I gave the word
Now in the morning I sleep alone
Sweep the streets I used to own
…
It was the wicked and wild wind
Blew down the doors to let me in
Shattered windows and the sound of drums
People could not believe what I’d become
Revolutionaries wait
For my head on a silver plate
Just a puppet on a lonely string
Oh who would ever want to be King?

August 23, 2010 Time Heals All Wounds ~ Part 9: Draw Near to God
Recent Comments
20 Comments | Leave a Comment
"This is late, partly bc of my preoccupation and partly bc I'd been slowly reading ..."
Jennifer Serena’s Serenity – Luxury Hotel, Birthing ..."
"Thank you for your commitment to truth and love, Suzanne. Best wishes to you and ..."
Meredith Anne Not a Goodbye, More of a ..."
"For your sake, I am so glad you will no longer be editing and managing ..."
Lana Not a Goodbye, More of a ..."
"For what it's worth, I've learned a lot from you about a Very Creepy movement ..."
Griff Pryce Not a Goodbye, More of a ..."
Browse Our Archives
get the latest from
Nonreligious
Sign up for our newsletter
POPULAR AT PATHEOS Nonreligious
1