What if God hates Quiverfull? How would Jim Bob & Michelle know? 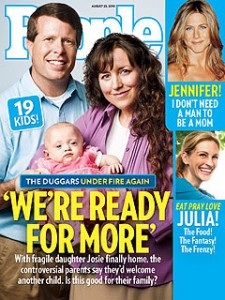 In the latest issue of People magazine, Jim Bob & Michelle Duggar say they are ready to consider a 20th child.

The only thing that surprises me about this statement is the fact that Michelle is not already pregnant ~ I was predicting that she’d make an announcement when she received that “Mother of the Year” award at Vision Forum’s Baby Conference last month.

Since writing the latest NLQ FAQ: Which of Your Kids Would You Rather Had Never Been Born?, I have been thinking more about confirmation bias and Quiverfull.

Specifically, I wonder, “What if God hates Quiverfull ~ what could He do to communicate His disapproval of prolific and indiscriminate reproduction to the Duggars, who claim to be “following [their] convictions”?

Let me explain what I mean.

When I first began to hear about the Quiverfull conviction of trusting the Lord with my family planning ~ leaving my reproductive life completely in His capable hands ~ I convinced my (ex)husband, Warren to have a vasectomy reversal.  The surgery was successful and I immediately got pregnant ~ confirmation that Quiverfull was indeed God’s will for our family.

Everything that could possibly go wrong during that pregnancy did: gestational diabetes, preeclampsia, polyhydramnios, emergency c-section ~ that’s just the short list ~ the full story was an absolute nightmare.

Afterward, friends and family came to visit me in the hospital and all of them asked, Are you really sure this is what God called you to do?

In trying to explain to myself how that pregnancy ~ in which I had fully trusted in God ~ could go so wrong, I imagined the following scene in Heaven:

God to Satan: Have you considered my servant, Vyckie? She is completely faithful to me ~ even risking her life to be obedient to My calling.

Satan: Well, of course Vyckie serves You and loves You ~ look at all You have done for her ~ You’ve blessed her beyond measure.  Take away Your protection and blessing ~ and watch her curse You to Your face!

God to Satan:  No ~ Vyckie would never deny Me ~ “Though He slay me” is her life verse.  Go ahead ~ check it out ~ do your worst ~ only don’t kill her ~ and see how she continues to love Me.

So it was a test ~ and God obviously was so pleased with my sincere and wholehearted devotion to Him ~ He had me in the same category as Righteous Job, in whom He had full confidence.  This to me was confirmation that Quiverfull was indeed God’s will for our family.

Baby number five was born at home ~ an almost unheard of HBA4C (home birth after 4 cesareans ~ Google that and see how many stories come up besides mine ~ none that I know of) ~ obviously, I had proven myself faithful in being willing to conceive again even after coming so close to death with my previous pregnancy that I actually felt my spirit being sucked down that long black tunnel that you hear about.  And now, God was blessing me with my first vaginal delivery ~ a victorious home birth!  Wow ~ of course, this was confirmation that Quiverfull was indeed God’s will for our family.

Many good things happened in our family life during our Quiverfull years.  We started a “pro-life, pro-family” newspaper which grew into a profitable business/ministry which supported our growing family quite comfortably.  The governor of Nebraska presented us with the 2003 “Family of the Year” award at the Nebraska Family Council’s Salt & Light banquet.  We were able to have our home remodeled ~ completing our full basement and adding an extra bathroom and two more bedrooms.  All these blessings were confirmation that Quiverfull was indeed God’s will for our family.

When my seventh pregnancy ended in an emergency c-section due to partial uterine rupture ~ the doctor recommended that I never get pregnant again.  However ~ he did not perform a hysterectomy ~ so I still had my uterus ~ how could I know what the Lord wanted me to do with it?  “Seems to me that God’s made it very clear what He wants,” the doctor told me.  But to me, it wasn’t clear at all.  If God wanted me to stop having babies ~ He could have arranged it so that I did not have any choice about it.  Obviously, He wanted me to continue to trust Him.

About that time, things were getting more and more overwhelming and intense at home ~ Warren’s personality disintegrated to the point that he was driving us all crazy ~ I could not keep up with the homeschooling or the home business ~ my oldest daughter was struggling with serious depression ~ during this time, I constantly had a mental image in my head of a huge black and white target on the roof of our home ~ all our efforts to advance the Kingdom of God had caught The Enemy’s attention and now we were in the midst of his evil frontal assault.  Naturally, this was confirmation that Quiverfull was indeed God’s will for our family.

So here’s the deal:

As a Quiverfull believer, whenever anything that could be considered good or positive happened in my life ~ I took it as proof that I was doing right and therefore, God was blessing me.

Conversely, whenever anything occurred which wasn’t so great ~ trials, tragedies, hardships ~ these I considered as evidence that I was doing right and therefore, Satan was upset and he was determined to make me regret having chosen the Quiverfull path.

Either way ~ I *knew* beyond a shadow of a doubt that my Quiverfull ideals were God’s will for me.

I see that same confirmation bias in Jim Bob and Michelle’s recent statements with regard to their conviction to trust the Lord with their family planning.

“Our family is stronger than ever,” Jim Bob, 45, tells PEOPLE in its new issue. “We made it through the storm.”

So here’s what I’d like to ask Quiverfull believers:  What if God hates Quiverfull?  What if He’s embarrassed by the poor witness to “the World” which only sees irresponsible and narcissistic parents building their own little fiefdoms?  What if God thinks Quiverfullers put too much emphasis on the “be fruitful and multiply” part of the Dominion Mandate and not enough on stewardship and “tending the garden”?  What if God (gasp!) actually values women for more than just their ability to get pregnant and have babies?  What if the Lord cares about little baby Josie ~ and wants her to have all the benefits of her mother’s loving, undivided attention?  What if God wanted to tell the Duggars to stop?

What could He do to get His message across?

Obviously, preeclampsia and a micro-preemie baby didn’t convince them ~ in fact, the challenges seem to have strengthened their determination to follow their Quiverfull beliefs.

“People think we are overpopulating the world,” says Jim Bob. “We are following our convictions.”

August 12, 2010 Daughter of the Patriarchy: The Sickness ~ Pt 1
Recent Comments
110 Comments | Leave a Comment
Browse Our Archives
get the latest from
Nonreligious
Sign up for our newsletter
POPULAR AT PATHEOS Nonreligious
1

Can’t We Just Agree to Differ?
Well, no. It has been tried; Stephen Jay Gould proposed that we...
view all Nonreligious blogs
What Are Your Thoughts?leave a comment
Copyright 2008-2020, Patheos. All rights reserved.