Women are conditioned to be submissive to their husbands, discouraged from using birth control, and prohibited from working outside the home. Gothard-style worldview and lifestyle overburdens women, enslaves the daughters and destroys families. 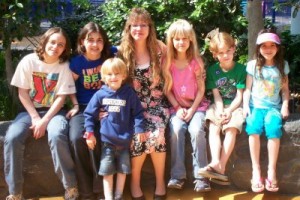 Vyckie Garrison was involved with Webster ally, Bill Gothard’s teachings for 14 years; after following the fundamentalist teachings of the ‘Quiverfull’ movement, Garrison was subjected to mental abuse and told to ignore medical advice not to have more children because her job as a woman was to obey God by submitting to her husband – an act that allegedly afforded her physical and spiritual protection.

“Gothard’s teachings stress that safe and proper, ‘godly’ living comes from submission to authority.  A woman must submit to any and all whims of her husband, including all types of domestic abuse,” said Garrison.  “Anyone concerned about women’s equality and empowerment should be alarmed by this religious movement.”

According to Bill Gothard, a man’s wife “has to realize that God accomplishes his ultimate will through the decisions of the husband, even when the husband is wrong.” Citing I Thessalonians 5:18 (“In every thing give thanks”), Gothard even advises a wife whose husband chastises her to say, “God, thank you for this beating.” And Gothard adds to Christ’s words from the cross: “Father, forgive them, for they know not what they do. But you know what you are doing through them to build character in me.” *

Gothard’s Institute for Basic Life Principles has political ambitions.  Kathryn Joyce, an expert on Christian extremism, notes in her book, “Quiverfull: Inside the Christian Patriarchy Movement,”  that the Institute of Basic Life Principles is a $63-million per year business that enumerates a series of “nonoptional” spiritual laws calling for strict authoritarian child training, including a fundamentalist condemnation of worldly modern music and toys and an ethos of unswerving obedience to one’s proper authorities in all jurisdictions of life.

“I have personal experience as a woman who has lived under the rule of such religious extremism and I know it is a threat to women and families if a person who subscribes to these principles is elected to Congress,” said Garrison.

October 4, 2010
10 things that happen when you leave the Quiverful/Patriarchal movement
Next Post

October 7, 2010 Reflections on what went wrong
Recent Comments
7 Comments | Leave a Comment
Browse Our Archives
get the latest from
No Longer Quivering
Sign up for our newsletter
POPULAR AT PATHEOS Nonreligious
1