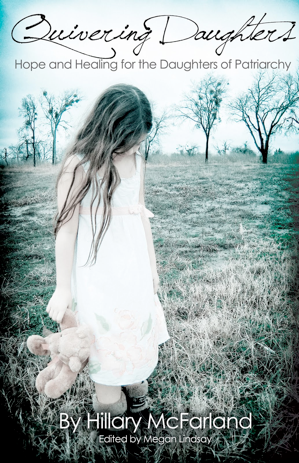 Proverbs 22:6 says: Train up a child in the way he should go, And when he is old he will not depart from it.

Damn ~ I really hate that verse. Let me tell you why.

1) It is from this proverb that we Quiverfull moms got the idea that through diligent training we could ensure our children would become mature Christians firmly grounded in the Lord and His word. Of course, we all know that God has no grandchildren ~ our sons and daughters must come to their own faith in Christ ~ still, there is a promise implied in Proverbs 22:6 which leads QF parents to believe that by our intimate involvement in their day-to-day lives, we can influence our children for righteousness.

2) It is from this same verse that our children get the idea that their adult future is our responsibility. I don’t think we ever blatantly taught our daughters that their marriage, their career (or lack thereof), their walk with God, their ultimate happiness ~ all are inseparably dependent upon their upbringing ~ but we did teach them the principle of authority … and with authority comes responsibility. If Quiverfull parents are going to claim the authority to guide and direct our daughters’ education, training, choice of a mate, career path (or lack thereof), and even their daily devotions and quiet time ~ then are we shocked when these same daughters blame the parents when things don’t work out and they are struggling?

In other words ~ we can’t say, “Mom & Dad are to be the primary influence over our children’s education” unless we’re also willing to be fully accountable when those children are in some ways unprepared for higher education, the marketplace or domestic duties due to gaps in their learning. We can’t spend years teaching our daughters to trust and expect their parents’ intimate involvement in their choice for a life mate, and later, when as young women, they are in relationships which are necessarily messy and imperfect, say, “Don’t blame me because you are unhappy!”

This is Steadfast Daughters’ dilemma: books such as “Raising Maidens of Virtue” inculcate an expectation of higher standards, better-than-average daughters who excel in every way. It is not only the QF Moms who have these highly idealistic expectations ~ our daughters catch the vision and they’re trusting in the Lord to work His will in their lives as they submit to His established authorities ~ i.e., Mom & Dad. So when the Quivering Daughters deal with hurt, disappointment, despair (all of which are common experiences in all families ~ not just Quiverfull homes, as Steadfast Daughters repeatedly points out) ~ Stacey and her guest bloggers want to say, “So we’re not perfect ~ there are no perfect parents ~ don’t blame us!”

It is true that girls in every family experience abuse to varying degrees ~ regardless of their religious beliefs, non-beliefs or admitted confusion. The difference is ~ Quiverfull families have a clearly stated objective of raising morally and spiritually superior daughters. Non-quivering families say, “Let’s all do our best and that will be good enough.” Mary Pride calls that “No-Fault Parenting” and says it is shameful. In Quiverfull homes, there is no such thing as “good enough.” The children are expected to be superior ~ and the parents are expected to be superior too.

This sets the stage for big-time disappointment all around.

Children who have been raised with unrealistic expectations will not let their imperfect parents off the hook as readily as kids raised in regular families. “To whom much is given, much will be required.”  We taught this to our daughters … taught ’em diligently ~ remember?! ! Let’s not be surprised that these young women have learned their lessons well.

However, there are many ex-Quiverfull mothers who do find themselves dealing with older daughters (and sometimes sons) who are extremely angry ~ they lash out at their mothers ~ blaming, refusing to understand and/or forgive. I am finding that this is often a necessary part of the process of leaving the cultic mentality. It is very painful ~ but at the same time, we ex-QF moms recognize that the enmeshment which is part of the Quiverfull experience sometimes necessitates that our children go through this. Because they were never permitted to establish their independence in their teenage years, it’s as if they must do it now, in their mid- and late-twenties. It is the spiritually abusive Quiverfull teachings that we moms blame for this, as well.

We have already discussed Steadfast Daughters on the NLQ forum here ~ comments for this post are open below.

Steadfast Daughters in a Quivering World:

Read all posts by Vyckie Garrison

December 9, 2010 Steadfast Daughters in a Quivering World ~ Part 3: Perception
Recent Comments
22 Comments | Leave a Comment
Browse Our Archives
get the latest from
Nonreligious
Sign up for our newsletter
POPULAR AT PATHEOS Nonreligious
1