Daughter of the Patriarchy: The Shift

Daughter of the Patriarchy: The Shift December 22, 2010 Guest Contributor 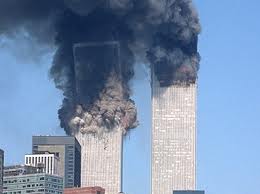 Clear morning light filtered in the empty door of the bakery. I was alone behind the storefront, a wall of bagel baskets hanging like a curtain between me and the rest of the world. My mother busied herself in the front of the store, wiping counters and making coffee as I methodically drew and cut the clear plastic wrap in its long rolls. I wrapped another sponge cake, applied the golden bakery label, and set the finished product on a tray to be stored and sold for the Jewish holidays. It was normally one of the busiest weeks in the store: the owner was Jewish and had many connections with the synagogues in northern New Jersey. We were a hotspot for holiday feasts.

The street outside was still. Taking a moment’s break, I wandered to the front windows and peeked out. A few police cars were gathered at one end of the road, their officers bundled together talking. It was too far away to see their expressions. I tried to swallow the creeping sense of unease mounting beneath the silence of the morning. The television had been abuzz when we left for work, though no one knew what was going on. My grandparents urged us to listen to the radio at work and see if we could find out, but the news was no more conclusive in the shop.

At length a trembling woman in work attire bustled into our shop, her face white and drawn. She had come in for coffee, but she carried a more valuable commodity: information. “They’re saying a plane hit the World Trade Center,” she told my mother. “They’re grounding all flights. They don’t know how many were hijacked. They don’t know how big this is, but they think there’s at least one headed for the Pentagon. We’re under attack.” My mother blanched.

Searching their faces and finding fear, I felt my mouth go dry and a chill overtake my body. I had never heard of the World Trade Center before, much less noticed the buildings on the single occasion I’d been to New York, but this was not the time to admit that. I hastily fumbled with the radio for more details, hiding myself again behind the bagels and sponge cakes as my mother probed the woman for more details. A sober but breathless journalist murmured over the radio that the southern tower had collapsed. Imagining a fiery building toppling ablaze into the Hudson River, I carried the radio to my mother and mechanically told her the news. Our guest stood frozen. She’d clearly left work to visit us, but there seemed little point in returning now. Dazedly, she turned and stepped away, deciding that others needed to be told.

I looked again at the police outside and was gripped with the sudden realization that the final prophecies were surely coming true. My stomach contracted. I felt cold, weak, unable to stand. What had I done with my fifteen years of life? Had I ever really imagined what the end of the world felt like? Did I have the Holy Spirit, or was this the last hour I’d spend on earth with my mother? I looked at her. She hadn’t been raptured yet, but it had to be soon.

“Well.” My mother said softly. “This must be it. Even so, come, Lord Jesus.” But I saw the grief etched in her face as she considered the souls she’d failed to bring into the Message – my father, her parents, her brothers and sisters. It was surely too late now. The Lamb had left the mercy seat, and judgment was hurtling through the sky right now, ready to strike.

The Japanese, I thought wildly, my mind inexplicably reverting to Pearl Harbor. They’re coming. No, wait… they’re our allies. Have they turned on us? What if it’s Russia instead? I wondered at myself in the midst of my terror – why did my mind go there, to stories of enemies past? William Branham had taught us not to fear Russia – well, he had taught his followers in the sixties that. But he was a prophet, and his word was still good. It was a little country in the Middle East we had to fear, according to the Message.

I locked myself in the bathroom and cried for a helpless moment, but did not linger. I didn’t want to die in the bathroom. I wondered if I’d have the chance to see the light of the nuclear bombs before they struck, or if we’d be caught instantaneously into oblivion. Secretly I hoped that we were close enough to New York to be caught in the blast, and we wouldn’t face the terrors of fallout that Brother Branham had so graphically described.

I could no longer think to pray for the Holy Spirit, sure that the fear I felt meant I was lost. Surely my mother wasn’t afraid – she’d had the Spirit for years. I stared at the world and mourned – not for her, the saved, but for myself and the earth itself. The trees that would be ripped apart so young, the flowers that bloomed defiantly in the face of their coming death. I thought about the animals busily milling in the forests, unaware of the unfolding climax of human drama. They, too, would die, just like me. All of us, just trying to live, trying to grow up and make something of ourselves. Myself, not yet sixteen, saving money for a car and dreaming of human love. The fat grey squirrels, saving nuts and hoping for a hole of their own in the trees. All of us were frozen in those useless seconds, waiting, staring at the Earth we loved and watching as it died before us.

But of course we didn’t die. We went to church the next Sunday as the facts unfolded, ever tangled with doubts and theories. The message we heard was unequivocal, however: this attack was the first of the Earth’s birth pains. The contractions would grow heavier and closer together, until at last the Tribulation birthed the Millennium and Christ’s holy new world. Would we be among the Bride, surveying the purged earth at the side of her Husband, or would we be the dust underfoot? I suspected that I would be the dust. I looked at Sven with longing. Will you remember me? I wondered. Will you know that the dust you walk on loved you?

As time elapsed – useless, hopeless time spent waiting for the end – I felt as though the world itself had shifted. I could no longer relate to it the way I did as a child; I no longer felt an indescribable sense of peace and connection when I walked in the forest. What I felt was only the inevitability of death – for the forest, for its furred inhabitants, for myself, for my dreams. I plunged deeper into the Message, hoping to soak up the last drops of mercy. But I sensed that the altar had been wiped clean.

January 4, 2011 Adventures in Recovery ~ Surfing
Recent Comments
3 Comments | Leave a Comment
Browse Our Archives
get the latest from
Nonreligious
Sign up for our newsletter
POPULAR AT PATHEOS Nonreligious
1

Feminists, Repent!
Jillian is right---Matt could not possibly make his gospel look more unattractive...
view all Nonreligious blogs
What Are Your Thoughts?leave a comment