[Note: For NLQ readers wo have not yet joined the forum, here’s a small taste of what you’re missing ~ :)] 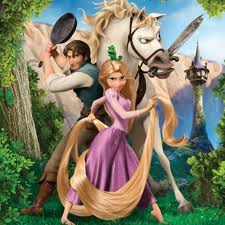 I found this and just about died. As a woman who escaped from my own abuser and “tower” of extreme fundamentalism, I can’t get over this woman’s take on the Disney movie “Tangled”:

Ladies Against Feminism: Mangled Stay-at-Home-Daughters on the Silver Screen.

Rapunzel’s rebellion, anti-domesticity, and general unwillingness to stay put are decried at length. In the movie, Reims states, “we’re treated to an interesting commentary on homemakers and why these captives to domesticity are setting themselves up for eventual disenchantment.”

Even though Rapunzel was deceived by her kidnapper, Reims writes, because Rapunzel thought Gothel was her mother, Rapunzel is a sinner for rebelling against TOTAL abuse, control, and slavery when Rapunzel becomes an ADULT! Rapunzel is put in the same camp as Mother Gothel (“If we’re prepared to say that Mother Gothel’s sins are inexcusable, we must be prepared to say the same of Rapunzel’s”), even though Gothel is a textbook abuser right down to the insults with “I’m just teasing” and the use of terrors to control Rapunzel that Gothel herself has manufactured.

I was amazed at the thorough depiction by Disney of every kind of mental and emotional abuse. Like many of the captors whom we in this forum escaped, Gothel only turns to physical abuse when all other forms of abuse fail. When Rapunzel tries to escape, obviously suffering from acute Stockholm Syndrome, Gothel stalks her and creates a crisis to force her back into bondage. The world is evil, keep your light in the tower, says Gothel. Mother knows best. You’re 18, 21, 25? So what.

From this writer’s viewpoint, if you’re in a home, being domestic, it doesn’t matter that home is a prison and you’re being abused. It doesn’t matter that your authority figure has no intention of ever letting you leave, and does not recognize that parental authority has an expiration date or that husbandly authority can be abused until it is invalid. If you leave, at all, for any reason, you’re being sinful and rebellious and anti-biblical.

A lot of beautiful girls are locked in towers in the fundie-qf-homeschooling cults because their mothers, like Gothel, are getting too old for their “callings” and their older teen daughters represent a fountain of youth of sorts. The mothers can keep getting pregnant every year, relying on the youth and strength of their captive older daughters to raise the kids. Just like Mother Gothel.

The hero, Flynn, gets castigated as a “sinner” too, despite his utterly Christlike willingness to give his own life to free Rapunzel from Gothel, and the fact that he personally restores Rapunzel to her real parents(!) Even though Flynn never once tries to take sexual advantage of Rapunzel during their travels, and sex appears to be the furthest thing from Rapunzel’s mind–it’s more like a buddy movie, with two pals hitting the road who eventually fall in love–Rapunzel is a slut nevertheless. Of course she would have to be: she’s out from under “authority” and with a guy, “camping out in the woods with said scoundrel.” When Rapunzel gives Flynn the tiara, Reims argues, this is a symbol of sleeping with him. Funny how I missed that completely. I also missed the “magical droplets from the sun god.”

I think I understand where the offense is coming from. There’s a sequence in which Rapunzel sings through a hilarious litany of about a dozen boring “womanly arts” and wonders aloud when her life will begin. We can’t have that. What could be scarier than grown young women who are bored with homemaking and want lives in the outside world, and cute young men who love them and would gladly die to help them reach their full potential? I suppose a Christian animated adventure would have had Rapunzel simply make candles and paint and read her three books until she died in captivity.

Join us on the NLQ forum!  Comments are also open below.

Read all posts by Tess Willoughby!