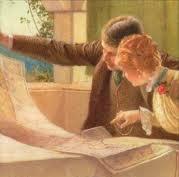 We had two children nineteen months apart. We wanted a larger family than just two. At that time we had never heard of patriarchy. We just loved kids, and we loved making them. However, after that I did not have any more. Of course I was disappointed, but we were alright with that at the time. As they approached school age I began to fret. I loved being with my kids and I did not want to send them away. I had met a family one time that educated their children at home. I was still working part time, but we decided that I would stay home with the children and teach them myself.

If that is all that I would have done it would have been great, but of course I had to join a support group. That is were the trouble began. It was full of very fundamental families with many children. And of course none of the other mothers worked outside of the home. Their kids always seemed to be so well behaved. One thing I should have noticed is that there were very few families with teenagers. Since I did not have any I did not notice. I have come to realize a lot of these beliefs cannot make it through teenage years. Many of these moms were so “helpful”. They began to give me all sorts of advice, and that included Created to Be His Helpmeet and To Train Up a Child.

At that time I was questioned about how many children I planned to have. We were not trying to prevent pregnancy, so I shared that. Many mothers determined that God must be trying to teach me something, like maybe I was not being submissive enough to my husband and on and on. I began to feel like something had to be wrong with me, so I began to try to be the perfect, Godly wife. The only problem: I wasn’t reading the scripture, I was relying on Michael Pearl, Bill Gothard, Little Bear Wheeler, and eventually satan himself – Doug Phillips.

So, instead of being my husband’s capable helpmeet, I now became a meek, submissive, and unable to make any decision on her own little wife. He was also being counseled by men who were into ATI (Bill Gothard’s Advanced Training Institute) and finally followers in a very big way of Doug Phillips. I still am not ready to reveal how closely we are associated with Phillips. But it is very close through friends of ours.

My husband was now becoming the “leader” of his home. He stopped helping me with chores around the house. If he needed something done I was expected to drop everything to meet his needs. I never went anywhere that he did not want me to go. I even missed a going away party for a dear friend of mine. She was very hurt by this and our relationship has never been restored. He wanted me home to be at his beck and call.

Our sex life was ruined, as he would get mad and pout for days if I did not give in anytime he wanted. I began to never say no, but then he would be mad if I was not “in the mood.” It was damned if I do and damned if I don’t. I really resented him at this point, as I felt like I was being raped. Just to keep the peace and keep him happy I would pretend. If I did not he would treat me and the children horribly.

I was in the hospital with a bad infection, and he decided he wanted to go play baseball. Instead of being with our kids he played ball. It was always up to me to see that the kids were taken care of, even when I was sick. I took them to most of their activities, and would never dream of asking him to help. No matter that they were his responsibility too. However, he did coach my son’s baseball teams for many years.

My husband did work hard though. He would work two jobs since I was no longer working and I had made very good money. When I quit our income took a huge hit. Even with his working two jobs we were struggling to make ends meet, as we still had a huge house.

One of the worst things was that he no longer considered my feelings about anything. If I dared ask him for help doing anything, he would inform me that he worked hard, and since I did not have a job, then I could do what I needed done. One of my lowest points was when I was having trouble with my son in school. He was being very defiant. My husband was in his shop tinkering, and I asked my daughter to go get him. He chewed me out for disturbing him and informed me that he was busy.

Discipline became a huge problem. He was very strict, punishing the children for every little infraction. He would make rules that I was expected to carry out. I would be blamed if the kids misbehaved. I became so weary, that I just did not care. I would yell and scream at my kids to try and make them do everything right. You see I was terrified that if everything was not perfect then he would leave. Where would that leave my “perfect’ family? My children would be scarred for life and it would be all my fault for not being the perfect wife.

After ten years with no more children I was pregnant. I was overjoyed. I was finally doing it right and God was no longer withholding His favor. I was a blessed woman. Little did I know how much of a blessing the child would really be. She would eventually become the turning point in our messed up life.

Read all posts by LivingForEternity!

May 22, 2011 Daughter of the Patriarchy: Surveillance
Browse Our Archives
get the latest from
Nonreligious
Sign up for our newsletter
POPULAR AT PATHEOS Nonreligious
1