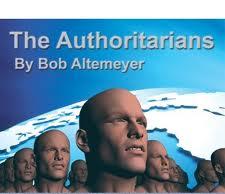 The Authoritarians, a free book published on the internet and written by a sociologist named Dr. Bob Altemeyer of the University of Manitoba, is a fascinating review of his 40 years of research into the authoritarian personality in America and Canada.  While the book does focus on the results of years of sociological experimentation, the statistics and number-crunching is mostly confined to the footnotes section so that the findings can be discussed in language that is easy to understand for the general audience.  I personally recommend reading the footnotes, however – the additional discussion helps provide context for a lot of surprising and shocking conclusions that the experimental evidence has produced, which might be tossed out as baseless allegation and opinion otherwise.

Most people, when they hear the word ‘authoritarian,’ likely immediately associate the concept with people such as dictators.  It might seem strange that such a topic should appear on a website for women seeking help regarding spiritual abuse, but the connection lies with the power of authority.  The two largest sources of authority in our world today are governmental and religious, and authoritarian leaders and followers can be found involved with either one (and as the research bears out, can overlap between the two without much difficulty).  Therefore, it may be of use to the readers here to see if their spiritual and earthly lives have been influenced or even controlled by a person or group of people exhibiting authoritarian characteristics.  Based upon the stories I’ve read here, I’d say it’s quite likely.  Perhaps understanding the motivations and thought processes of authoritarian followers and leaders could help with the healing process.

This book focuses on right-wing authoritarianism (RWA) which should not be confused with right-wing politics, though the evidence provided by this work shows some degree of correlation.  RWA personalities have an unusually high respect and trust for established authority, either governmental or religious, while left-wing authoritarianism (LWA) does the same for leaders seeking to tear down the current order.  Dr. Altemeyer’s work has found tiny scraps of LWA in North America but the great preponderance of authoritarian behavior observed has been of the RWA variety, hence his frequent use of the RWA term throughout the book.

It’s important to understand that the conclusions reached in this book are based on scientific experimental evidence, mainly through sociological surveys and personality tests.  I think he explains this point very well in the book’s introduction, so I’d like to simply quote a portion of his Introduction chapter, page 4, (bolded emphasis mine):

“The second reason I can offer for reading what follows is that it is not chock full of opinions, but experimental evidence. Liberals have stereotypes about conservatives, and conservatives have stereotypes about liberals. Moderates have stereotypes about both.  Anyone who has watched, or been a liberal arguing with a conservative (or vice versa) knows that personal opinion and rhetoric can be had a penny a pound. But arguing never seems to get anywhere. Whereas if you set up a fair and square experiment in which people can act nobly, fairly, and with integrity, and you find that most of one group does, and most of another group does not, that’s a fact, not an opinion. And if you keep finding the same thing experiment after experiment, and other people do too, then that’s a body of facts that demands attention. Some people, we have seen to our dismay, don’t care a hoot what scientific investigation reveals; but most people do. If the data were fairly gathered and we let them do the talking, we should be on a higher plane than the current, “Sez you!”

“By conventionalism, the third defining element of the rightwing authoritarian, I don’t just mean do you put your socks on before your shoes, and I don’t just mean following the norms and customs that you like. I mean believing that everybody should have to follow the norms and customs that your authorities have decreed. Authoritarians get a lot of their ideas about how people ought to act from their religion, and as we’ll see in chapter 4 they tend to belong to fundamentalist religions that make it crystal clear what they consider correct and what they consider wrong. For example these churches strongly advocate a traditional family structure of father-as-head, mother as subservient to her husband and caretaker of the husband’s begotten, and kids as subservient, period.”

As the excerpt mentioned, Chapter 4 discusses the link between fundamentalism and authoritarianism and will probably be of most use to the readers here.  The preceding three chapters provide the context for Chapter 4, though, so I don’t suggest skipping directly to it.  Chapter 5 is about authoritarian leaders, which includes religious leaders, so there is likely to be some value there as well.  Chapters 6 and 7 focus more on politics, and so are probably more ancillary, though the link between politics and the Religious Right is quite strong so it could provide useful insight as well.

I have no doubt this book will not go over well with some people – sociology typically covers generalities and trends rather than specific individuals, and inevitably some folks will take some of the conclusions presented as a personal attack, which is a shame because it could be a useful tool for introspection.  I know I have noticed trends in myself and some members of my family and friends that correlate to what Dr. Altemeyer has found here, and I hope that others can find benefit in the work presented as much as I have, which is why I asked Vyckie if she knew about this work and why I agreed to a short book review for the website.  Since the book is completely free over the Internet, it’s very easy to attain a copy if you have internet access (which, if you are reading this, is probably the case), so the only investment that needs to be made is making the time for it!

May 31, 2011 Crushing Daisies ~ Ways in Which Patriarchal Fundamentalism Harms Its Children ~ Part 1: Work, Work, Work!
Recent Comments
0 | Leave a Comment
"This is late, partly bc of my preoccupation and partly bc I'd been slowly reading ..."
Jennifer Serena’s Serenity – Luxury Hotel, Birthing ..."
"Thank you for your commitment to truth and love, Suzanne. Best wishes to you and ..."
Meredith Anne Not a Goodbye, More of a ..."
"For your sake, I am so glad you will no longer be editing and managing ..."
Lana Not a Goodbye, More of a ..."
"For what it's worth, I've learned a lot from you about a Very Creepy movement ..."
Griff Pryce Not a Goodbye, More of a ..."
Browse Our Archives
get the latest from
Nonreligious
Sign up for our newsletter
POPULAR AT PATHEOS Nonreligious
1