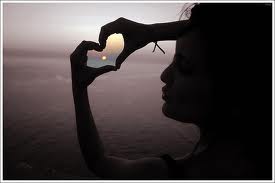 We had a good time talking and getting more comfortable being around each other that first day of our courtship. And best of all we were able to see each other again the very next day at Greek class. It was kind of nice to be officially courting, because now we could get down to business and talk in more depth about our beliefs and what we were hoping for in a marriage relationship and children.

That Monday after Greek class (while my sisters hung around and waited for me to be ready to leave) we even talked a little bit about ideas for a wedding. Before I left that night “Hunk” gave me a letter to open the next day (he called it “sad Tuesday”) since we wouldn’t be able to see each other.

I got to open it the next day and it was my first “love letter” of sorts, detailing how excited he was to start this relationship with me and that he couldn’t wait to see me the next day. I must have read it 20 times that day, and I still have that letter tucked in my old journal now.

For Wednesday we planned to get together at the church where I taught some violin lessons in the morning. We each had a sister along to hang out in the church and chaperon while “Hunk” and I ate the lunch I had made and talked. After we ate I pulled out my list. I was very serious and intentional about what I believed and what I would not be OK with in a marriage relationship. Over time I had written 4 pages of theological, relational and child raising questions that I considered important. Some of them were non-negotiable in my mind, such as whether or not he was a Christian, what his beliefs on birth control were, and if he believed that men and women were equal. Some things on the list were preferences, like would he be open to homeschooling and was he OK with the fact that I have some food allergies. And still others I was just curious about, such as would he be willing to talk about things that made him angry or was he a quiet thinker type, what did he like to do for fun, what were some of his best memories from childhood?

I think “Hunk” was kind of surprised at the size of my list, but he answered all my questions openly, and even came up with a few of his own on the spot. When we were done, there was moment of awkward silence, and then “Hunk” said “well, I guess now we just have to hang out and see if we click.”

He drove over to my house for dinner with the family on Thursday, and again on Friday. We planned to go on our first real live date to the zoo that Saturday. I could hardly wait. One of his sisters and one of mine tagged along to chaperone, and we had an amazing time walking around the zoo and talking, and talking and talking. We talked about dreams for the future, hopes and convictions. I loved that he was willing to engage on every topic that came up, and that he continued to take whatever I was saying seriously, and respect my opinions.

Our sisters took some pictures of us together, and looking at them now, you can see the happiness in my face in every single one. I remember him telling me that I was beautiful at some point that day, and my heart just soared. Towards the end of the day, I slipped walking up some stairs and as I regained my balance I saw that he had reached forward to take my hand, and I found myself wishing that we had permission to hold hands.

**********************
When I got home that night, I started to feel slightly panicky. All my life I had been told that men were pigs, only cared about sex, and could not be trusted. I had built a huge wall of protection around my heart, never letting anyone get through. I prided myself on the fact that at 19 years old, I had never kissed or held hands with anyone, and that I never hugged males. I had been trained to be very modest in my dress, taught how to walk without swaying my hips, and how to avoid flirting in any way. I could not understand how after only a week of official courtship, I was falling for this guy.

Could it possibly be OK to have feelings for “Hunk” already? Was it safe to be letting down the wall around my heart? How could I have let so many of my protection mechanisms go in just a few days?

I talked to my parents about it, and expressed that I was nervous about the whole thing. They told me that this was fairly normal, but that it was good to be careful. Don’t give away too much of your heart, but realize that God could be leading this somewhere.

After talking with them, I sat on the couch praying and crying a little, just wondering how to trust my feelings. I worried that if I let myself fall in love that it would only come to nothing and that my heart would get broken. That I would get my hopes up, and then he would call it all off, or my parents would find some reason to object to the match.

Eventually, I looked over at the end table and noticed a small porcelain clock that I had never seen before. I picked it up, and while looking at the little birds etched on it I noticed some writing on the bottom edge of the clock. 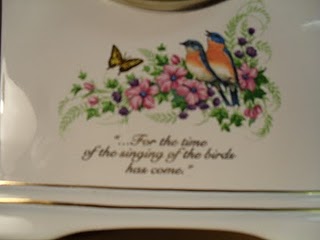 “…For the time of the singing of the birds has come.”

My heart jumped as I read it over again. I could not believe that my verse was staring me right in the face. I called my mom over and asked her where this clock had come from, and she told me that it had come in the mail that day from a great aunt of mine.

I was flooded with joy, feeling as though God had sent that clock just for me, to let me know that it was safe to let my guard down and allow myself to be vulnerable.

Could it be that the rain was ending, and the time of the singing was finally here?!

What do the atom bomb and the god...
Imagine yourself a cave man in the dawn of mankind. Would you...
view all Nonreligious blogs
Copyright 2008-2020, Patheos. All rights reserved.