Midwife at the Birth of Quiverfull

A review by Hopewell

Frank Schaeffer, son of Fran and Edith Schaeffer of L’Abri fame, continues his personal memoirs in his new book Sex, Mom, and God: How the Bible’s Strange Take on Sex Led to Crazy Politics–and How I Learned to Love Women (and Jesus) Anyway

. Before I review the book I want to say that I was sent a copy to review by Frank Schaeffer, but was not paid for my review so the views expressed here are my own.

as some of the funniest books I’ve ever read. That said, I’ve found his non-fiction version of his life to be tougher reading. While his fiction is trim, funny and pulls the reader fully into the story, his non-fiction sort of rambles. And has a somewhat bitter edge to it. Considering his upbringing, these are not surprising and they do not come across as whining–more like talking in circles. That said, I learned a lot of new information in this volume, and did certainly get some good laughs.

Readers of this blog who read and critique my Duggar-family posts, will be especially interested in Frank’s role in birthing the Quiverfull movement. Way back in the Day, when he was still styled “Franky Schaeffer” (to distinguish him from from his same-named father), Frank was literary agent to a new Christian author named Mary Pride. With the Schaeffer name attached, Pride’s book was a shoe-in. Today we know her, and her (in)famous book, The Way Home: Beyond Feminism, Back to Reality

as the Spiritual Mother of the Quiverfull Movement. Frank(y) then, was her midwife.

What makes Frank(y)’s role so intriguing, is the fact that his parents were very much pro-birth control. His mother, who in fact and fiction, loved nothing (except maybe the Lord) more than discussing sex, revealed to her very young son that not only was his father a “passionate” lover, but his needs were such that they had marital relations every day–even when Mom was “off the roof” and Biblically unclean due to menstruation. She also showed him her diaphram and explained its purpose fully to her surprised son.

[life style and book of same name–which predate Martha Stewart and still have a cult-like following today], Edith famously said that even on the Mission Field a wife needs a see-thru black nightie to entertain her husband. After “The Way Home,” Edith questioned her son with “Where did you find this unfortunate woman?” Like much of Edith’s prose, rhetoric and general life questions, this is a question still relevant today.

Quiverfull also promotes stay-at-home-wives who “support” their husbands, by staying quiet, gazing adoringly, popping out child-after-child regardless of consequences to Mother’s health, regardless of the Father’s ability to provide a decent standard of living, regardless of whether the needs of all those children as individuals are being met. Yet, Edith was very much a career woman and very much a “stand UP to your man” type wife. A missionary serving alongside her husband, she was also his secretary, agent, fundraiser, financial adviser, PR person—oh yes, and housewife and mother. Edith became a success in her own right, publishing books, giving lectures, etc. She also generally traveled with her husband–due to his “needs”–leaving her children at home. Meanwhile, her youngest child, Franky/Frank pretty much was left to raise himself.

Aside from family read-alouds and the education that the work of L’Abri itself provided, the famous homeschooling, that her daughter Susan Schaeffer Macaualy, would raise to the level of a near-idolic adoration in her classic book, For the Children’s Sake: Foundations of Education for Home and School

, was almost non-existent in Edith’s role as Franky’s educator. So neglected was his formal education, that he was finally sent to boarding school in England to catch up. His informal education, though, could have sent him straight to Harvard if the College Board had an admission test that covered Calvinist doctrine, Biblical sex and other essential “life skills.”

Also interesting is that many Christian homeschooling parents, if they even expose their children to the fine arts, are known to cover the genitals on Michelangelo’s “David” in photographs with black Sharpie-marker or post-it notes considering them “defrauding” to their children (I can sympathize with the endless jokes young boys can make about David’s “stuff” though…). Fran and Edith Schaeffer believed in ART and beauty as part of God’s creation. Frank grew up with Fran blasting music of the world’s great operas to drown out his family, L’Abri students and his unsaved Mother all struggling to muddle thru the day in the Chateau in Switzerland

Still another way that Edith Schaeffer is totally at odds with the Quiverfull wives of today is fashion. Far from hiding herself in the ubiquitous “frumpers”*** of today, Edith kept herself in shape, wore the “right” amount of makeup and dressed in ways that showed off her neat figure. She would never have drawn attention to herself in a way that would make her look ridiculous–such as appearing on the beach in a Duggar-style wholesome swimsuit or riding a float in a parade nursing a baby in a huge pink cape! Instead, she choose a modest bathing suit (and other clothing) in tune with the day’s style.

Nor would she draw unwelcome attention to her children by saddling them with a name like “Levicticus” or “Justice Truth” or other politically-charged “wear-the-parents-politics-for-life” name. But unlike many Quiverfull families today, instead of trying to isolate herself from the world, she fearlessly and unashamedly lived the Great Commission. She had the courage to share he faith whenever possible. [Please, can anyone EVER forget the “Gospel Walnut”???] She could pray extemporaneously in any situation, in a volume guaranteed to be heard by the UN-churched anywhere. Now, how many Quiverfull wives today would dare pray when their husband is at the head of the table [well, without being TOLD to by her husband!]? How many would allow STRANGERS, (“WORLDLY” ones at that!) whose beliefs were not in any way close to the “party line,” to live in their home and possibly “corrupt” their children?? 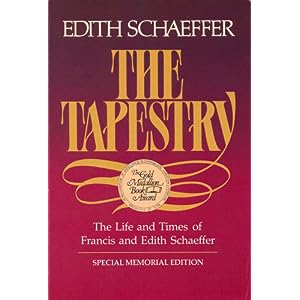 For all that many critics accuse Frank of belittling his parents in his books, I think the fact that Edith READ all of his books speaks volumes. She is not offended, or if she is, it has not been offended in such a degree or way as to ask him not to publish his work. Also telling is the very love that shines thru from Frank to his mother in all of his writings. He may not agree with everything, but he does certainly “honor” his mother in his own way. Probably with hindsight, like most parents, Edith can see how outrageous some of life was in those hectic L’Abri days.

Hopefully, hindsight will help some of the extremely-isolating Quiverfull and Christian Patriarchy parents of today to see that moderation is a good thing. I am only sad that Edith, approaching 100, cannot write her own book–a follow up to her The Tapestry: The Life and Times of Francis and Edith Schaeffer

that would set the Quiverfull movement on its ear in her gracious, very positive way!

***[Note: “Frumper” is a made-up name for the long, shapeless jumpers so beloved of extreme-Quiverfull moms.]

June 5, 2011 NLQ FAQ: Should There Be a "You" in Quivering?
Recent Comments
3 Comments | Leave a Comment
"This is late, partly bc of my preoccupation and partly bc I'd been slowly reading ..."
Jennifer Serena’s Serenity – Luxury Hotel, Birthing ..."
"Thank you for your commitment to truth and love, Suzanne. Best wishes to you and ..."
Meredith Anne Not a Goodbye, More of a ..."
"For your sake, I am so glad you will no longer be editing and managing ..."
Lana Not a Goodbye, More of a ..."
"For what it's worth, I've learned a lot from you about a Very Creepy movement ..."
Griff Pryce Not a Goodbye, More of a ..."
Browse Our Archives
get the latest from
Nonreligious
Sign up for our newsletter
POPULAR AT PATHEOS Nonreligious
1