Daughter of the Patriarchy: Daybreak 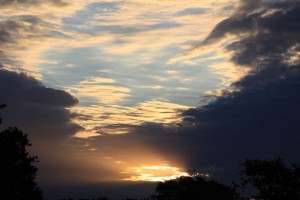 By the time I turned in my final remedial math exam, my family had settled into a tiny rental house in Pennsylvania. I was now eligible to start community college, getting prerequisites out of the way while finishing up my high school diploma. For my first semester, I was registered for Basic Problems of Philosophy (my mother, snickering, said, “There are a lot of problems with Philosophy,” implying that it was a godless discipline), and Earth Science.

Community college was a dazzling experience. Not only could I drive myself there three nights a week and not have to worry about tiptoeing around my father’s ever-simmering rage, I could talk to normal people face-to-face. I became painfully aware of the conspicuousness of my long skirts and hair, and went out of my way to dress up for college. I preferred to have people think I was simply overdressed than advertising my religion.

On the first day of my Philosophy class, our professor walked in – a tall, lithe woman wearing a fedora. “You may call me Professor V.,” she explained. “You may also call me Dr. V., if you need medical assistance, which I can provide.” She had three doctoral degrees, she explained. My eyes kept widening as she introduced herself. She seemed like a creature from a higher dimension: poised, collected, professional, and utterly unlike any other woman I’d ever known. Our first exercise was to probe the foundational source of our own identity in a one-page essay. I answered that, as a Christian, my identity came from within the imagination of God, the source of all Creation. I wrote easily, but afterward began to think. Was I being honest in my answer? Or was I only reproducing someone else’s thoughts?

Integrity became an increasing fixation in my life. Every day, I worked an eight-hour shift at Wal-Mart, and despite my best efforts to vary my wardrobe and to solicit comments on being overdressed rather than appearing strange, inevitably somebody noticed that I didn’t wear pants. “It’s Biblical,” I sighed. It was a shortcut other women had taught me to say when I didn’t want to have a long conversation about my dress. “If they’re thirsty, they’ll keep asking,” my mother and her friends had instructed. Inwardly, I was sick of inspiring thirst.

I couldn’t see the other girls as evil, depraved, captive or on the prowl to destroy men with their bodies. I saw people that I liked, people I wanted to be like, and the conspicuous nature of my dress burned in my conscience. “I don’t really believe wearing jeans is wrong,” I dared to think between fearful bouts of repentance. “This skirt I’m wearing is a lie.” But I quickly stuffed those thoughts into a hidden place in my mind, a place it would be safe to probe later, when I wouldn’t have to explain a pair of jeans to my mother or to God.

I want to be authentic, I thought. I wanted my actions to reflect my beliefs. And yet there was no room to examine my own heart in private, to sort out what I really believed about women’s dress. Every time I got dressed in the morning, I took a stand for the Message by donning yet another floor-sweeping handmade skirt. To dress otherwise would be to send up a battle flare, declaring my apostasy in one stroke. I’d be set upon instantly by a horde of Message women, all reminding me why Brother Branham said women shouldn’t wear pants and praying that the Lord would lead me to repentance. “Aha!” I could imagine some of them smirking. “We knew she wasn’t saved. She’s probably Serpent’s Seed.” I wasn’t ready for the drama I knew would instantly fall on me, so I hid as best I could: by wearing fancy skirts and answering, “I’m comfortable this way,” while inwardly chafing at the failure of my integrity. Wearing skirts meant always performing: I never had a moment’s privacy to sort out what I really believed.

As I worked my way through Wal-Mart and community college, I gradually grew more confident in my own abilities. I received an efficiency award at my cashier post and was rapidly promoted to Customer Service. By the end of my first year with the company, I was in line for an Assistant Manager position. At community college, I was placed on the President’s Honor Roll. My frantic hopes that I might pass my courses gradually slipped into the warm glow of assurance that I was actually pretty good at studying. Professors wrote encouraging comments on my papers and even took me aside to congratulate me on good work – an experience I had never before known.

Then, in the spring of 2005, I entered the course that changed my life forever. It was American Literature to 1865, an evening course taught by a professor with a booming voice and devastating wit, a hopeless crush on Madonna and a firecracker wife, and above all, a palpable love of literature. I sat in the front row, like I always did, determined to soak up all the education I could in two and a half hours. Beside me were people from all different backgrounds and ages, a mix that made me feel very comfortable. There was no norm here that I was failing to attain, no other teenagers against whom to measure my oddities; I was just one person in a diverse mix of learners, here to soak up what they could of American literature and get the credits they needed in the process.

Sometimes I left Bill’s class with my ears ringing from his bombastic voice, but I never thought of moving to the back of the room. I didn’t want to miss a word. As we traveled through a century of literature, I found inspiration in Anne Bradstreet and a nemesis in Walt Whitman. What I also found was a kind of validation I had never known before. I had opinions, and they were valued here. Encouraged. The more opinionated I was, the better! I could barely believe my good fortune.

One evening, as Bill handed me a paper I’d written with his comments, he asked, “Did you ever think of being a professional writer?”

I stared at him, afraid to breathe. “Yes,” I stammered. “I’ve always wanted that. But how could I afford to live?”

“There’s more than one way to write,” Bill answered. “You could go to grad school. You could become a professor.” My eyes widened. I could become a professor? The borders of my world seemed to explode, running out in all directions like shockwaves from an earthquake. I could go to grad school? I felt like I’d just been told that I could go to the moon. I recalled the sign I had seen the previous year: “From Homeless to Harvard.” I could be that girl who overcame, who rejected the life laid out before her and forged a new one. I could make something of myself. Bill thought I could be that girl.

I thanked him dazedly, took my paper, and went home.

“How did you do?” My mother asked as I walked in, clutching the paper with my heart ringing as loudly as my ears. I looked at her and tucked my waist-length hair behind my ear, grinning. “I got an A.” And I went upstairs to think about how big the world had just become.

September 19, 2011 You Like?
Recent Comments
3 Comments | Leave a Comment
Browse Our Archives
get the latest from
Nonreligious
Sign up for our newsletter
POPULAR AT PATHEOS Nonreligious
1