Throwing Out the Moral GPS 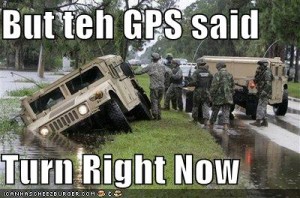 Growing up in fundamentalism was like living with a moral GPS navigator installed in my head. Every decision was mapped out already; all I needed to do was listen to the voice telling me where to go. Sometimes I could stop and look at the map. Most of the time I was looking ahead, trying to live, listening and following directions as best I could.

The GPS gave me directions for living: Read the Bible and pray every day. Obey your parents. Be respectful of elders.

Those directions made sense. They were there to help me get where I wanted to go: straight ahead. There were no twists and turns yet.

Then the directions got a little stranger: Listen to one of Branham’s sermons every day. Wear long skirts. Be modest. Grow out your hair. Throw away worldly music. Throw away makeup. Look down on public-schooled kids. Don’t watch TV.

The GPS gave me directions for my relationship with my parents: Ignore your father’s rage and violence. Win him to Christ by silence. Submit to him as your earthly head until you are married. Follow the chain of command.

It gave me directions for relationships with boys: Don’t touch. Don’t laugh too much. Don’t be alone with them. Don’t give away pieces of your heart. Wait for God to bring you your husband.

It gave me directions for lifetime ambition: Your greatest calling is to be a wife and mother. Choose a vocation you can pursue at home, while raising children. Learn to cook and sew. Don’t venture out into the world.

The cacophony of advice was deafening. More troubling still, I felt a tug, a conflict in my soul. There was something wrong with the directions.

I was going in circles. The roads looked too familiar. I was trapped here, spinning in the dark, following the dull illumination of my headlights, listening for the next command. Nervously, I watched out the window and flinched when I spotted pale pairs of green forest eyes reflected back at me. Anywhere, there might be roadblocks. There might be deer. Where was I going?

I stopped by the side of the road and locked my doors. I let my engine idle. I looked at the map displayed on the GPS screen.

“This is not where I want to go,” I said hesitantly.

“You don’t understand,” I argued, growing bolder. “I need to get somewhere. I don’t want to burn up all my gas going in circles.”

“But I’m not going anywhere!” I yelled. Fingers shaking, I turned off the GPS. I stashed it in the back seat under a pillow. I took out the batteries and flung them into the woods.

The silence was overwhelming.

Then I noticed a tiny bobbing compass stuck to my dashboard, a vestige of an earlier time when I was free to find my own roads. The compass pointed north.

I eased the car back onto the road. The compass dipped and bobbed, but held true. I watched the fluid inside form tiny bubbles around the arrow.

I came to a fork in the road.

“TURN RIGHT!” screamed a ghostly voice from the back of my head.

Anxiously, I glanced right and left on this unfamiliar road. I had no idea what animals might jump out at me, what pitfalls or construction might lie ahead. How could I find my way out of here on my own?

Then, as I drove, I grew more confident. Morning broke. As the trees melted away, I saw the forest in my rearview mirror. I glanced at the compass. It held steady.

For the first time in my life, I turned on the radio and floored it.

The moral of the story here is obvious. GPS navigators are great conveniences. They can get you almost anywhere you want to go. But if you use them all the time, you start to forget. Reading a map and finding your way feels difficult, unfamiliar. Risky.

Human beings weren’t made to follow moral GPS directions. We were made to find our way, minute by minute, adapting and readjusting our route along the way. We were meant to notice the scenery and remember it, to accept each turn as a choice, to own it and live it consciously.

We weren’t meant to follow ready-made routes. No such routes exist in the landscape; they’re imposed on it by the almighty powers of Google and men like William Branham, Bill Gothard and Doug Phillips.

Why do we rely on moral GPS navigators with their pre-recorded voices? (I’m looking at you, Voice of God Recordings!) Why are we so afraid to find our own way? Because we might trip up? Because we might find ourselves in a ditch needing forgiveness? If we’re never so vulnerable, how are we supposed to know who might stop and give us a helping hand?

I don’t know the names of the roads I may take. I didn’t know them, either, when I was listening to Branham’s voice telling me where I had to go. I trusted him, and found myself spinning. Now I trust the destination.

Some call this following the Holy Spirit. Some call it keeping our eyes on Jesus. I call it trust. Maybe even faith.

And the music is way better.

September 26, 2011 NLQ FAQ: The Bible & Accountability in Marriage - Part 1: Bringing Real Change to Your Relationship
Recent Comments
2 Comments | Leave a Comment
Browse Our Archives
get the latest from
Nonreligious
Sign up for our newsletter
POPULAR AT PATHEOS Nonreligious
1