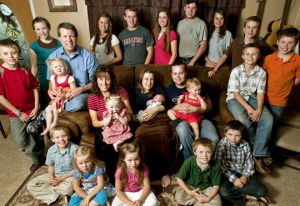 Mega-family parents, Jim Bob & Michelle Duggar of TLC’s “19 & Counting” fame announced on TODAY they are expecting baby #20 – due in April 2012.

Despite a difficult pregnancy and premature delivery of now-23-month-old, Josie, Michelle told TLC viewers she is willing to “lay down her life” for another baby.

“We do not take for granted the wonderful blessings of life that God has bestowed upon us!” writes Michelle on The Duggar Family website. “Many years ago, Jim Bob & I gave this area of our lives to God, allowing Him to grant life as He saw fit.”

The flip side of the Quiverfull ideal of “trusting the Lord with our family planning” which Jim Bob & Michelle embrace and promote through their TV Reality show, website, and numerous books, is that Michelle also accepts the possibility of her own or her baby’s deaths, should such tragedy occur, as God’s will.

In her book, The Way Home, Beyond Feminism and Back To Reality, Quiverfull proponent, Mary Pride explains that mothers who risk their lives for the sake of building the Kingdom of God are to be honored the same as missionaries:

“Routinely we send missionaries off to work in unsavory climates, knowing full well that they will probably come down with amoebic dysentery, be overheated (or frozen), receive inadequate medical care in second-rate hospitals, and on the average live ten years less than other people. But we don’t tell people not to be missionaries. Instead, we commend missionaries for their courage.

“Missionaries go to foreign countries to beget new Christians; mothers get pregnant to be beget new Christians. Even if maternal missionary work has some hazards (and what missionary work doesn’t?), the noble way is to face them with courage. Likewise, we really ought to honor women with medical problems … diabetes, asthma, quadriplegia, arthritis, heart problems … who are willing to serve God with their bodies as mothers.  These are the unsung heroines of the modern church.  (p. 57 emphasis in original)”

To further understand Michelle’s willingness to risk her life, consider that Quiverfull leaders routinely downplay the health risks when questioned regarding the prudence of prolific motherhood.  Again, Mary Pride, citing page after page of examples of supposedly bogus health risks and throwing in as an added bonus, the “medical dangers of not having children,” encourages women to trust the Lord in the face of suffering:

“Devotees of evil will sacrifice all they have — money, health, reputation — to maintain their lifestyle.  If the actual threat of venereal disease or AIDS does not deter the wicked from their pursuits, why should the mostly phantom threat of “medical problems” deter us from ours?  God will stand by His daughters who are willing to serve Him.”

I explain this idealism which led me to repeatedly endure high-risk pregnancies and life-threatening deliveries in greater detail at No Longer Quivering: here and here.

Quiverfull moms are nothing if not consistent in their submission to the will of God – for better or worse.