Debunking the Fourteen Basic Needs of a Marriage: Part 1a

Debunking the Fourteen Basic Needs of a Marriage: Part 1a March 11, 2012 Guest Contributor

In the Introduction, we looked into the general idea that Bill Gothard is trying to get across in this series. He attempts to list seven basic needs of a husband and seven, also, of the wife. We discuss the flaw in this logic, which is, Bill treats life as if all men and women are exactly the same. Worse yet, Bill positions this series, as well as all of his “truth” in all of his materials, as the non-optional, unquestioned, standard for finding favor with God.

Let’s look at Bill’s first “Basic Need” of a husband.

Basic Need One: A man needs a wife who is loyal and supportive.

My wife, Kristine, is going to school full time while she raises six children. She is always tired and sore at the end of the day. According to Bill’s one-sided need here, I should come home, be allowed to throw my feet up, and demand a beer. She should oblige.

I’d rather rub her feet. And guys, if you follow my advice, you will have a VERY loyal and supportive wife. Notice her. Buy her flowers (or a can of WD-40 and a hammer drill, if she’s into that). Listen to her until you drop dead. Talk her ear off so she calls you a woman but secretly loves you for it. But, most importantly, do nothing I tell you to do. Figure out what your wife’s needs and desires are and meet the heck out of them. 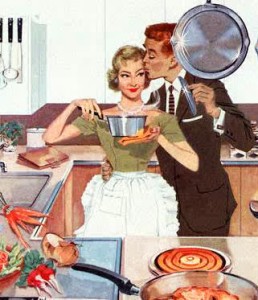 Then, Bill expounds on his first basic need:

Helping her husband fulfill his goals and dreams is a wife’s main responsibility.

Really? Not Kristine’s. She’s nearing the ripe old age of 30 and has no college degree. She knows it and wants it – bad! She is now concurrently finishing up two Bachelor degrees and moving right on to her Masters. Her main responsibility is to finish that baby up as fast as she can. But, unlike Bill’s clueless idea here, that is specifically her goal, and I am right there to back her up. My goals and dreams are wrapped up in everything I want to do in life, everything she desires, the desires of my kids, and how it all comes together in a chaotic ball of wax. No one person is obligated by anyone to prop up the other. It sure is nice when we both have each other’s back, though.

Remember that you are to support his vision—he establishes the goals and priorities for your family.

Um…what? A nice pipe dream. A family is made up of a bunch of individuals. Those individuals are not necessarily striving for the same unified goal. I want my kids out of my house the second they turn twelve years old – I mean eighteen. I want my wife to be so bloody successful, she makes me look like a little pipsqueak in comparison. My vision for my family is to get through today and hopefully tomorrow. That is not to say that I don’t have long-term visions and goals for us, but so does she. We bring them all together and figure out what will work, what is too risky (or, in my case, what is too safe…blecht!), and what costs too much. Then we don’t do any of it, go to bed, wake up, eat, do the day thing, and start all over.

Until Kristine went back to school almost two years ago, she was a stay-at-home mom. She had six children, and did all the daily duties of a woman that has six children and stays at home. She had no life outside of our family and craved adult contact. On the other hand, I went to work every day. This meant that she knew our children a thousand times better than I did, and still does. I love my kids, but I don’t know how all of them tick but rely on her knowledge and wisdom in raising them to be wildly successful individuals.

Bill does not speak to the man and tell him to stand behind his wife and her vision. She is not allowed to have one.

A foolish wife will crush her husband’s spirit by resisting his decisions, and God will hold her accountable for disobedience to His instructions. If your husband’s goals are not in harmony with Scripture, you should make a wise appeal.

Bill references Ephesians 5:22 – 24 here. Now, many may disagree with what Paul is actually saying here, but I am going to simply take his words at face value. Paul writes:

If you answer “No” to all of my questions, you would be correct. Let me sum up that passage in one sentence (sort of):

Hey wives! Submit to your husbands! Cause..um..Christ is the head of the church and marriage is like that.

Go ahead and argue what submission means. Read the next part of the Ephesians chapter and prove the tit-for-tat nature of mutual submission. Or ignore it altogether because it was simply Paul making his own conclusions. Whatever you do, don’t believe the lie that Bill is telling women. A woman is not foolish for resisting her husband’s decisions and will not be struck with a lightning bolt if she disagrees. As I stated in the opening paragraph, Gothard does not see his words as optional. If he did, he wouldn’t call women that don’t follow them “foolish”.

In Part 1b, we will look into Bill’s crazy notion that men and women ALWAYS think differently and, as you may suspect, due to the way a man thinks, he is the natural, meta-physically wired choice for leadership in a marriage.

Read all posts by Incongruous Circumspection!

(4) The Freedom of Divorce

Debunking the Fourteen Basic Needs of a Marriage:

The Formula Problem: Why Duggarizing Your Marriage is Not Recommended

Should a Wife Submit to Her Husband?

March 13, 2012 Why Courtship Fails: A Male's Perspective
Recent Comments
15 Comments | Leave a Comment
"This is late, partly bc of my preoccupation and partly bc I'd been slowly reading ..."
Jennifer Serena’s Serenity – Luxury Hotel, Birthing ..."
"Thank you for your commitment to truth and love, Suzanne. Best wishes to you and ..."
Meredith Anne Not a Goodbye, More of a ..."
"For your sake, I am so glad you will no longer be editing and managing ..."
Lana Not a Goodbye, More of a ..."
"For what it's worth, I've learned a lot from you about a Very Creepy movement ..."
Gwen Pryce Not a Goodbye, More of a ..."
Browse Our Archives
get the latest from
Nonreligious
Sign up for our newsletter
POPULAR AT PATHEOS Nonreligious
1

Of Hybrid Embryos, Human Rights, and...
Roll to Disbelieve
Related posts from No Longer Quivering

Nonreligious
Open Thread Covid 19 - Trump's Base Does...
No Longer Quivering